Love Escape Rooms? These Five Games Bring Them Right To Your Tabletop - Nerdist

Love Escape Rooms? These Five Games Bring Them Right To Your Tabletop

The Escape Room craze has really taken off (especially here in Los Angeles) and I couldn’t be happier about it. Getting a group of my friends together, locking ourselves in a room, and solving a myriad of themed puzzles in order to escape (followed by our traditional donut run) is one my favorite ways to spend an afternoon or evening. Unfortunately, I can’t always get a full team together, or sometimes money is a little too tight to justify spending $20-$40 per person for an hour of puzzle-solving. Luckily, there are a ton of new board and card games that seek to bring the fun and mystery of escape rooms into your own home. These often work well with smaller groups, and they’re pretty much guaranteed not to break the bank.

Escape Room in a Box 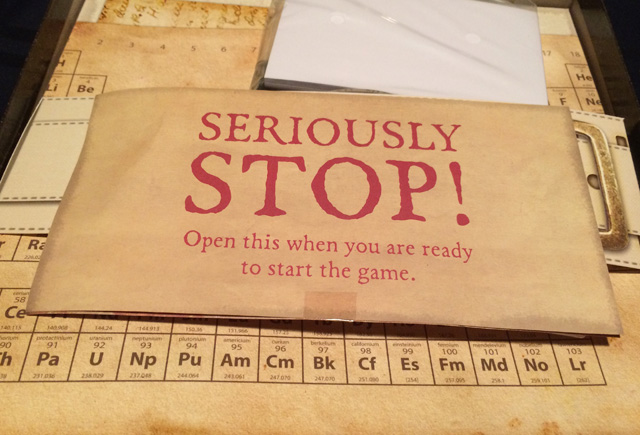 Escape Room in a Box, which has been licensed by Mattel after a very successful Kickstarter, might be the closest representation of an actual escape room on this list. The designers are diehard escape room fans (having done over 100 of them so far) and it shows in this box. Their “room” is modeled after a mad scientist’s lab where you have been dosed with a Werewolf serum and need to find the antidote. Without spoiling anything, there are a lot of elements that experienced escape room-goers will be happy to see in this game, but the one you’ll notice right away is that three containers in the box are physically locked, and if you want to progress, then you’ll need to figure out how to open them. Not only is this game filled with challenging puzzles, it has enough in the box to keep everyone in your group working on something pretty much the entire time. For bonus points, this game also integrates with Alexa for hints, tracking time, and providing mood music. 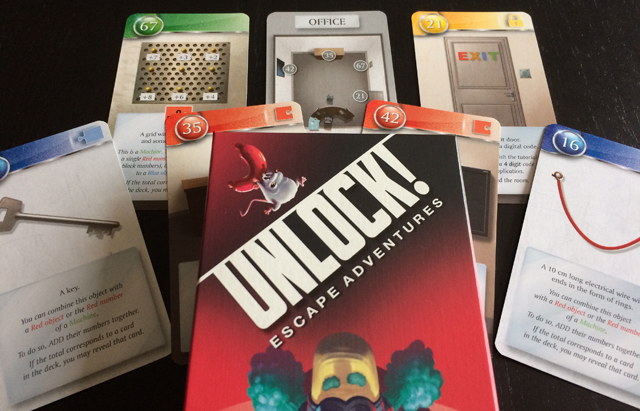 If Escape Room in a Box is the most grand of these escape games, Unlock! by Asmodee might be the simplest. But don’t think that means it isn’t worth your time. Instead of having several unique components, Unlock! simply puts every clue, puzzle, and location onto a card. This has allowed them to publish several different adventures (six so far) in small, inexpensive boxes. The game uses color coded cards and a companion app to keep things consistent, so if you’ve played one of their adventures, you’ll know how the rest of them work. It even comes with a quick tutorial room to learn how to play. And while you can only play through each box once, because you aren’t damaging the cards in any way, there’s nothing stopping you from handing off the box to some friends once you’ve solved it.

If you’re looking for more info, check out our full overview of the first few boxes of the series. 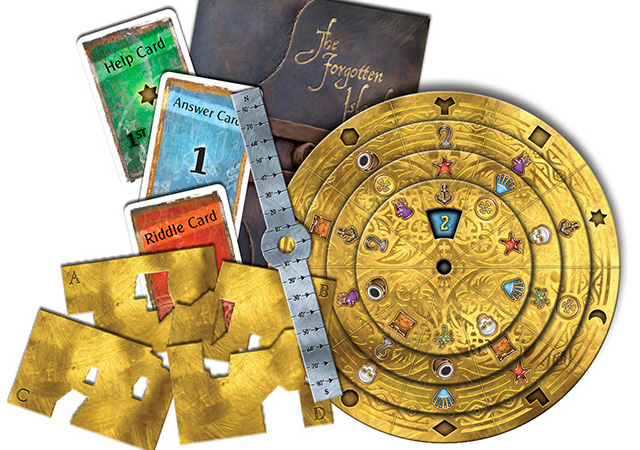 The first time I played an Exit: The Game box it broke my heart in the best way. Bear with me. The puzzles in these boxes are fantastic, forcing you to think unconventionally without being mind-numbingly difficult. The cards are well designed and easily understood. There’s a cleverly made decoder wheel to help you progress through the room. But the first time I realized I was going to have to cut one of the components into pieces (and you will be destroying components with some of Exit’s puzzles) something dawned on me. This game, these physical objects, are going to be enjoyed by me and my friends alone, and once we’re done, this box and everything in it will never be used again. Now, some might see this as a bad thing, but to me it speaks to the nature of what makes escape rooms great. Someone else might go to the same room, or buy the same Exit box, but they’ll never have the exact same experience that my friends and I had, and I have the shredded cards to prove it. 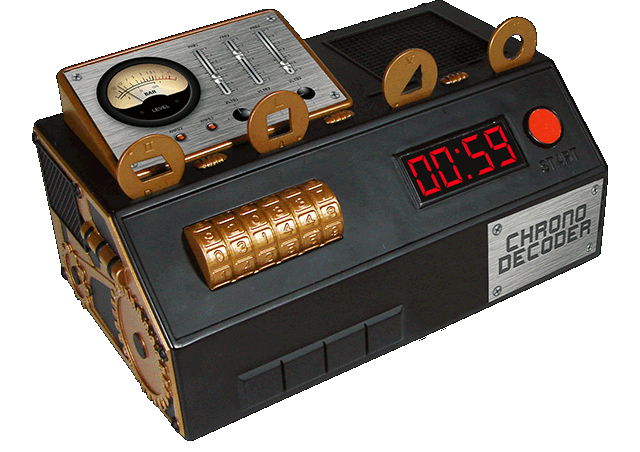 The aptly titled Escape Room: The Game by Spin Master brings with it something unique. While each of these escape room games has a different way to progress through the room, this box comes with the Chrono Decoder: a combination countdown timer and electronic key reader. Throughout each of the four rooms that come in the box, the puzzles you solve will point you toward certain keys. These keys need to be placed in the four slots of the Chrono Decoder in the correct order and orientation. If so, you’ll move to the next part of the room. If not, you’ll have to go back to the drawing board. While this component does force each of their games to use a common element, it will also allow for further expansions (two of which are already available) to be cheaply and easily made, meaning even more rooms to escape from should be on the horizon. 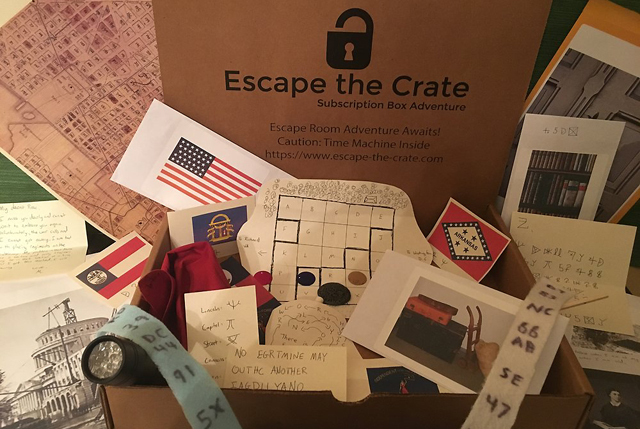 If you’re in the mood for something a little more involved than a one-off escape game, Escape the Crate might just be the perfect fit for you. Instead of a single game, this is a subscription box service that delivers a new escape room right to your door every other month. While each box has its own story, the boxes all fit into an overarching narrative whereby you are working for a time-traveling agency tasked with correcting aberrations in the timeline. You don’t need to have played any of the older boxes to solve the newer ones, but if you want to get the whole story, each “retired crate” can be purchased individually. As for the crates themselves, they really are a labor of love by the creators. As you can see, the components have a much more handmade feel to them. That’s because the designers started off making every piece in the box by hand. As their subscriptions have increased they’ve begun professionally manufacturing more of their materials, but they make sure to have at least one handmade item in each crate.

Do you know of any escape room style games that we missed? Let us know in the comments below!