While most folks who graduated from grade school probably remember making dioramas as kids, the odds that any one of them has done so as an adult seem quite slim. But maybe that will change after they see these ‘Book Nooks’ made by The Propping Block. The little slices of shelf art are not only spectacularly well crafted, but also reminders of how much fun it is to get lost in one’s favorite fictional worlds.

As of this writing, two of these Nooks have been posted to YouTube by The Propping Block, with one dedicated to The Lord of the Rings and the other to Harry Potter. In the Nook dedicated to the former, we see tiny Frodo making his way through Mount Doom while being stalked by Gollum. In the one dedicated to the latter, we get an extremely detailed peek at Hogsmeade.

Apparently the Nooks take about three weeks to make, and are created using the kinds of various materials that are core to crafty projects like these. The materials include, but are not limited to: popsicle sticks, snow flocking, sculptamold, dowels, and mod podge. What’s shocking, however, is the fact that the Harry Potter Nook was The Propping Block’s first attempt at making these novelty scenes. The Lord of the Rings one may be his second, although it’s unclear if he made more in between the two. 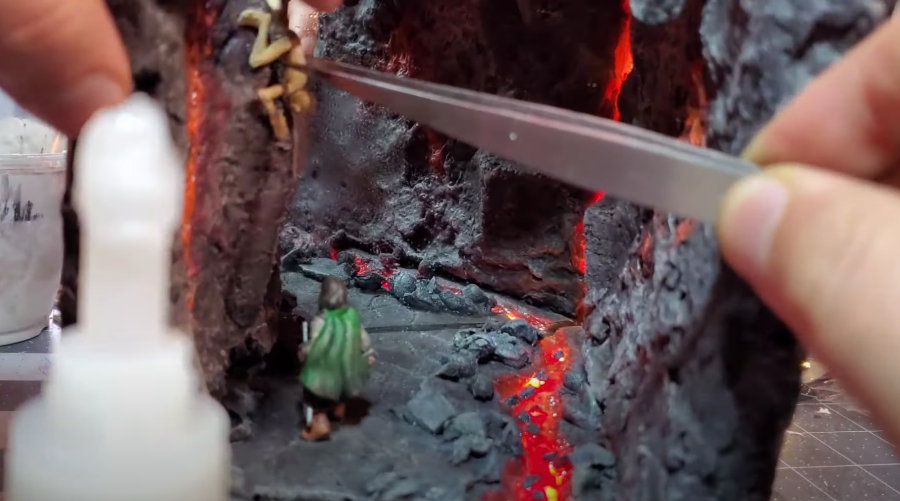 Unfortunately, there isn’t a ton of information about the person behind The Propping Block available on YouTube or any related social media account (there were none that we could find), but he has discussed his Nooks in various threads on Reddit. And we’ll go ahead and save you some time looking: There is no site where these fantastical yet cozy in-between-scenes can be purchased. But you can message The Propping Block, who goes by “granpappy” on Reddit, if you want one made for your favorite novel. Which hopefully has some greenbacks hidden in it, ’cause these Nooks don’t look cheap.

What do you think about The Propping Block’s Book Nooks? Which book would you like to see nook’d next? Let’s talk about the tiny scenes with the most potential in the comments!