Loki’s first season on Disney+ had a number of scene-stealing characters. Starting with the titular character of course. But perhaps there was one Loki character who stood above them all when it came to stealing every scene they were in. We’re talking about the ever chipper A.I. known as Miss Minutes. Voiced by veteran voice actor Tara Strong, the cutesy clock with the Southern drawl was the fount of information at the TVA. And quite a bit more.

A mix between high technology, old PSA ads, and a cereal commercial mascot, we should have known that we couldn’t trust her. In the season finale of Loki, they reveal Miss Minutes is actually in cahoots with He Who Remains (a.k.a. Kang), who is running the TVA from his Citadel at the End of Time. In an interview at Marvel.com, Loki director Kate Herron revealed that Miss Minutes’ function on the show was something that grew as time went on (pun fully intended). And she nearly got to kick some butt. 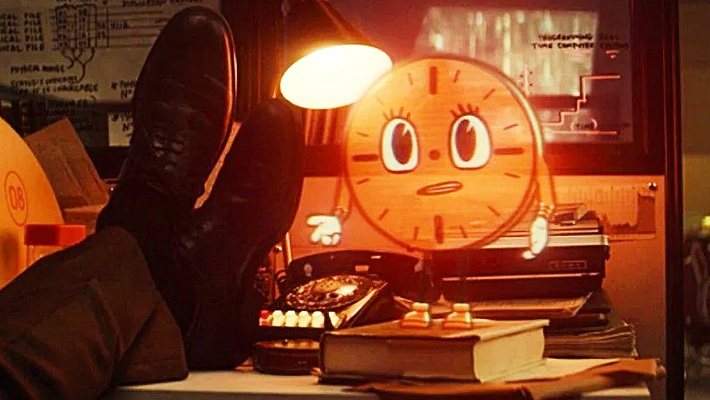 Although Miss Minutes was always a part of the grand plan, her close relationship with He Who Remains was something the writers and Kate Herron came up with during the pandemic break. Everyone wanted to keep Miss Minutes in the narrative somehow, because she’s so awesome. And they figured out a way to make her the eyes and ears of He Who Remains at the TVA. Not to mention, his loyal guardian in his Citadel. So loyal, she almost had an actual fight with Loki and Sylvie to protect him in the season finale.

Herron said “We always had a version where [Loki and Sylvie] kept meeting her at the Citadel. At one point, we had a fight scene with Miss Minutes in the Citadel; we had all kinds of stuff [for her].” Ok, we’re not sure how Miss Minutes could fight two Gods of Mischief. But we know we need to see it. Someone please make this happen in Loki season two. We have a feeling we’ve only begun to discover the truth about Miss Minutes. Marvel fans simply won’t achieve full happiness until we hear that “Hey, ya’ll!” one more time.