Whew, the season one finale of Loki went there. And we say season one, because yes, season two is happening. That’s good, because we have many questions after “For All Time. Always.” This Disney+ series took us for a ride. If you’ll recall, Loki and Sylvie made it past Alioth in the previous episode. We left the duo of Variants standing in front of a mysterious castle holding whatever stood behind the TVA. Now, we have answers. From a major character introduction to voices from the past, let’s break down the Easter eggs from the Loki finale.

In the episode’s opening, we hear iconic lines from the Marvel Cinematic Universe. They play over Harry James “It’s Been a Long Time,” a.k.a. Steve and Peggy’s song. We hear T’Challa, Hank Pym, Sam Wilson, Carol Danvers, and more speak. Even Vision’s “What is grief, if not love persevering?” line from WandaVision.

Then we hear lines from our own history, such as Neil Armstrong’s “One small step for man.” These all play as Sylvie and Loki stand outside the castle beyond the Void. They seem to be in a place where universes and timelines collide. It totally made us think of the wild landscapes in Doctor Strange.

As for the castle itself, bold golden streaks appear throughout the pillars and walls, bringing kintsugi to mind. The Japanese art form repairs broken pottery with golden lacquer to help imperfections shine rather than covering them up. Which kind of ties into how the TVA is “repairing” the Sacred Timeline.

After Loki and Sylvie enter the castle, they meet Miss Minutes—who absolutely knows everything and has this entire time. We knew her pleasant demeanor and smirk belied her true knowledge of the TVA. Anyway, she tells the Variants they have arrived at the Citadel at the End of Time. That has a history in the comics, first appearing in Thor #245. The Citadel was the last reality of the Multiverse And yes, it was the home of He Who Remains.

Though the comics version of He Who Remains appeared differently than the one in Loki (more on him in a second), he also played the role of the director of the Time Variance Authority and created the a trio called “Time-Twisters.” But then Thor and Jane Foster stopped those creations, and so the Time Keepers came to be.

“For All Time. Always.” wastes no time bringing Loki and Sylvie to the being behind the TVA: He Who Remains. Of course, we’ve known about Jonathan Majors being cast as Kang the Conqueror for Ant-Man and the Wasp: Quantumania since September 2020. So while Loki never refers to him as Kang, it’s totally Kang. He does mention he’s been called a conqueror (and a ruler, likely a reference to his Rama-Tut incarnation).

Loki has dropped a number of hints pointing towards Kang as the villain, and we’re thrilled to actually see Majors in the role here. He’s rocking a casual version of Kang’s purple and green costume from the comics. The golden medallion he sports makes us think of Immortus, one of Kang’s/Nathaniel Richards’ many incarnations.

And an interesting thing about Immortus in the comics: he manipulated Vision and Scarlet Witch to have Tommy and Billy. He wanted to push Wanda’s potential as a Nexus Being and harness that power.

In the comics, Kang was the descendant of someone who discovered time travel. Here, he’s discovered the Multiverse. He Who Remains is one of Kang’s variants and he’s communicated with multiple Kangs and stopped a Multiversal war.

In case you needed reminders about how the Time Variance Authority deals with, you know, time, the Citadel has plenty of visual cues. Cycles of the moon cover the floor along with the motion of planets. A giant clock looms above. The statues of He Who Remains have clocks for faces.

Look, we’ve heard callbacks to themes from previous Thor films throughout Loki. Composer Natalie Holt has done a gorgeous job with the Loki score, possibly doing for the theremin what Ludwig Göransson has done for the recorder in The Mandalorian. And in the Loki finale, she weaved in Mark Mothersbaugh’s “Twilight of the Gods” from Thor: Ragnarok. The nostalgic music underscores Miss Minutes’ offer to give Loki everything he’s ever wanted, including Asgard’s throne, if only he’ll go away. 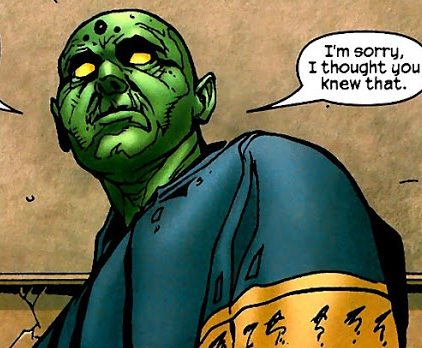 Four statues decorate the entry of the Citadel representing the Time Keepers. We saw three of them in Loki’s The Wizard of Oz reveal—all robots. The fourth statue in the Citadel is shattered, representing the exiled Oracle of Siwa. In the comics, the banished Time Keeper appeared in 4 #16 (4 as in the Fantastic Four). The Oracle helps the Fantastic Four fight Kang’s son Ramades.

Remember back when we first saw Ravonna’s pen in the second episode? The words “Franklin D. Roosevelt High School” appear on the pen. We thought maybe it was a connection to Kang or even Molecule Man, but no. The pen came from Ravonna’s life before the TVA where she worked at the Ohio based high school as a vice principal. Her name was once Rebecca Tourminet, and she graduated from Ohio State University.

Miss Minutes provided Ravonna with some files chosen by He Who Remains. We don’t know the contents, but we’re guessing whatever she saw has her on a mission. It’s likely we’ll see her go full Terminatrix in future MCU stories. In the comics, Terminatrix wants to control her own destiny and she goes to extreme lengths to do so. We have no trouble imagining her taking that desire for control to the nth level, doing whatever it takes to maintain a timeline she believes in.

A Few Words on the Multiverse

Once Sylvie kills He Who Remains, the timeline branches in countless directions. Hello, Multiverse. We knew it was coming what with Spider-Man: No Way Home and Doctor Strange in the Multiverse of Madness, but we didn’t know how. And wow, is it happening in style!

And then Loki ends up in another one of those timelines when he returns to the TVA. It’s not the same TVA he left. A Kang statue stands where the Time Keepers were, and Mobius has no idea who Loki is.

The next phase could lead us right into Secret Wars. That comic book storyline involved multiple realities colliding in upon one another until each universe’s planet Earth was combined into a surreal, interdimensional pocket reality called Battleworld. Considering it’s the one story the Russo brothers have gone on record saying they would return to the MCU to direct, it seems likely that Marvel’s Multiversal story arc could culminate with that tale. But as always, only time will tell.

Everything We Know About THE FLASH Movie