Literally Lose Your Marbles While Investigating THE TOWER OF MADNESS - Nerdist

Literally Lose Your Marbles While Investigating THE TOWER OF MADNESS

Cthulhu board games have gripped the tabletop public’s imagination like few other themes. Perhaps it is the strange cosmic horror unattached to real-life mythology. Perhaps it is the cool early 20th-century setting chock full of tommy guns, flapper dresses, and pulpy undertones. Perhaps it’s because H.P. Lovecraft’s works are mostly in the public domain, so there’s name recognition without the need to worry about licensing issues.

Smirk & Dagger Games takes this idea to a new height by repurposing a game many people played as kids and using the natural dread that game caused to mirror the fear felt by the investigators setting foot in a creepy town full of fish men. They gave us a copy of  Tower of Madness to see if we could save the world…or if we would succumb to madness. 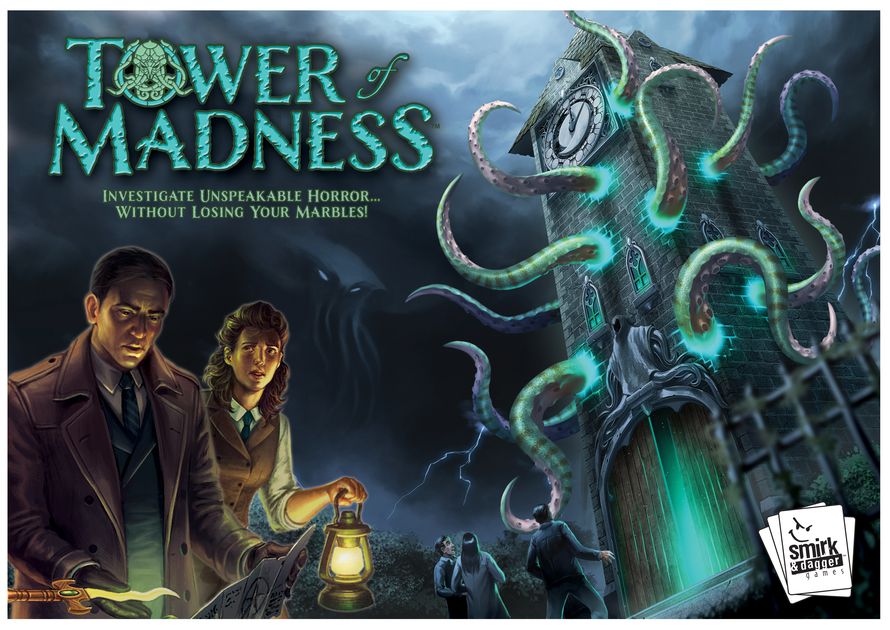 The central part of Tower of Madness is the titular tower. It’s comprised of sturdy cardboard with a magnetic clasp on one corner mounted on a plastic base that catches marbles. Horrors, represented by plastic tentacle sticks are inserted through the tower one by one until a delicate net is constructed on the inside. Then a variety of colored marbles are dumped in the top and the whole thing is gently shaken until the marbles are distributed throughout the tower. Players take turns attempting to investigate a location. Players roll five dice trying to lock certain dice in place after each roll. They must lock a Gate, Heart and Mind symbol to succeed, with the remaining two dice totaled together as their Discovery Dice. The player with the highest total on their Discovery Dice wins the points on the location, and the player with the highest point total at the end of the game wins if the investigators are still around to enjoy it. Each location has a specific rule that messes with this basic setup, such as requiring rerolls of certain  numbers or needing dice to be rolled in a specific sequence. 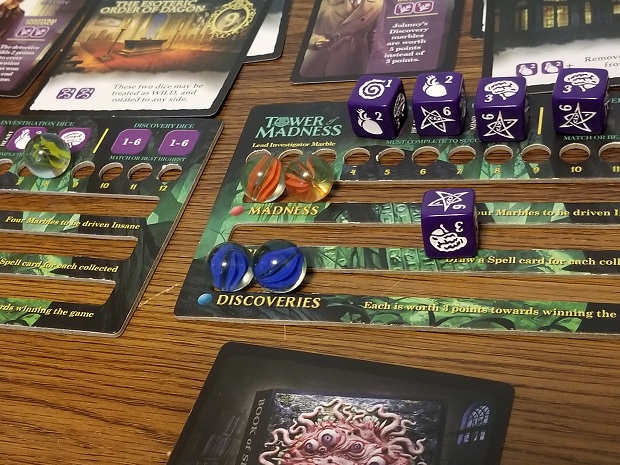 As play progresses and players fail to lock dice in proper combinations, the tentacles are drawn one by one until…

The tower is filled with a mixture of marbles that are both good and bad. Blue marbles are discoveries which are worth extra victory points at the end of the game. White marbles allow spell cards to be drawn that can mess with other players during their turn. Red marbles give the player madness, which can drive their characters insane and completely change the win conditions for the player and the mechanics of any spell cards.

Green marbles are DOOM! marbles. If all three of those drop, Cthulhu rises and everyone loses…except if the player that pulled the horror tentacle is insane, in which case they win because Cthulhu rewards them for being the one who brought him to Earth. 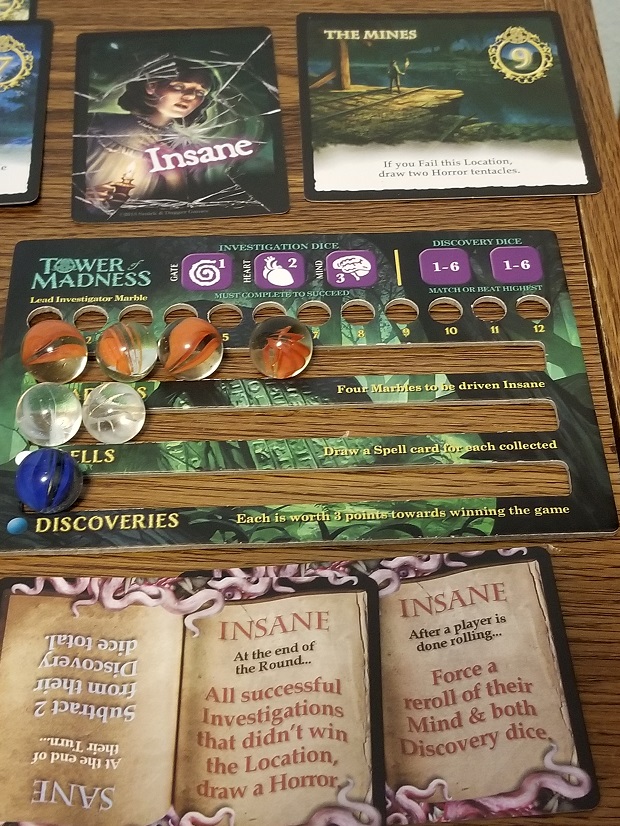 Gameplay is a mixture of Elder Sign and Ker-Plunk, with a healthy bit of Dread tension as the easy pulls go away and all the ones left in the tower have some manner of marbles waiting to fall. (It seems tailor-made to get hacked into some sort of Cthulhu RPG rules set soon enough like Dread.) Insane players automatically draw a tentacle horror instead of taking a normal turn, which accelerates the end game and gets a good mixture of unsteady moans from the sane players and cackles of glee from the insane players. The theming is very light but effective enough to reinforce the central mechanic of the game. Players looking for deep mysteries and dark truths won’t find them here, but they will find a table full of investigators covering their eyes when the lone insane player makes a pull that could bring the whole world crashing down.

Are you a fan of Elder God-inspired games? Tell us which ones hit your tabletop in the comments!