Could LEGO's New FRIENDS Apartments Set Be Any Better? - Nerdist

Could LEGO’s New FRIENDS Apartments Set Be Any Better?

So no one told you life was gonna be this way. Your job’s a joke and you’re broke, but not because you don’t get paid enough. It’s because you keep spending money on LEGO sets. But this your day, your week, your month, and maybe even your year. Because the company’s latest buildable collectible is one of its best yet. It’s a recreation of both apartments from Friends. And it comes with tons of great nods to some of the show’s best moments.

The one with the two apartments! Can you spot all the moments from classic Friends episodes? https://t.co/TqFYOgImqT pic.twitter.com/sLKd8DFmr6

LEGO has announced its new The F.R.I.E.N.D.S Apartments Set. The 2,048-piece collection features both Monica and Rachel’s and Chandler and Joey’s iconic New York City homes. Each is connected by the hallway outside their doors. (Though you can build them separately.) The entire set measures four-inches high, 25-inches wide, and 12-inches long.

It also comes with seven minifigures. We bet you can guess six of them! (Hint: they’re the “friends” from the show’s title.) But the seventh is a bit of a surprise. And “oh my God” you won’t believe who it is: Janice.

But part of what makes this one of the coolest LEGO sets we’ve come across are all the props included. You can recreate Monica wearing a turkey on Thanksgiving. Have Joey and Chandler sit in either a canoe or their recliners. And even watch Phoebe’s dollhouse go up in flames.

The set also comes with the Poking Device, Phoebe’s creepy “Gladys” artwork, the cheesecake that fell on the floor, Pat the Dog, Joey and Chandler’s baby chick and duck, and more. 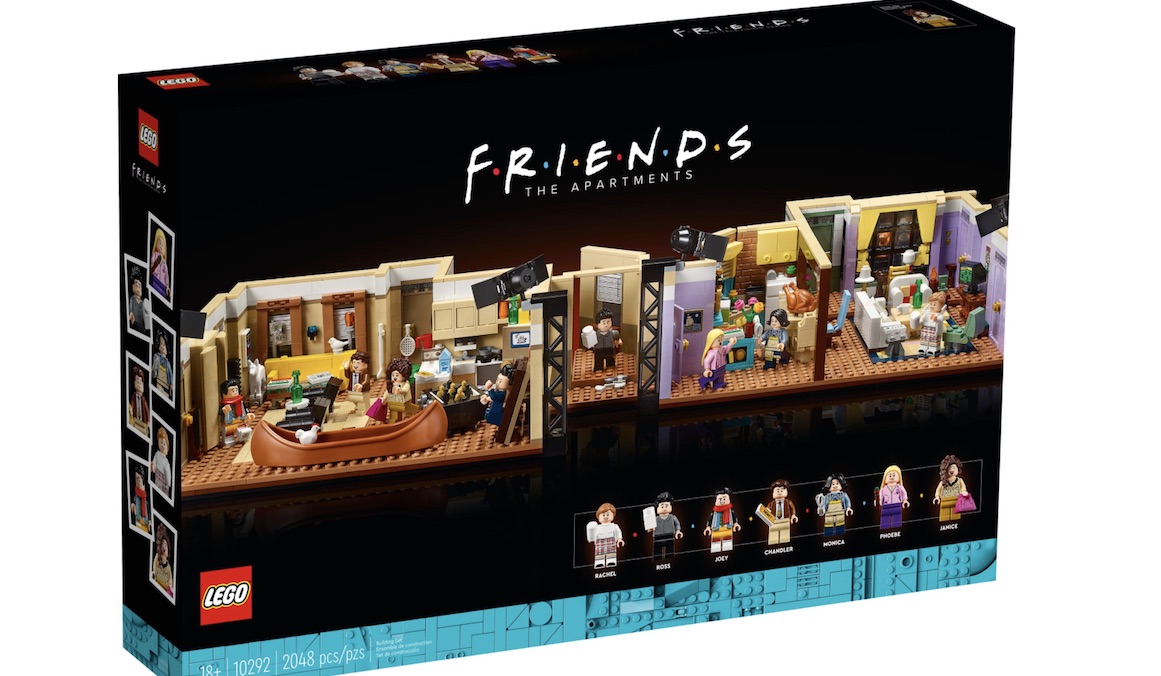 This set doesn’t just recreate the apartments, though. It also captures the feeling of shooting a sitcom. It also comes with set lights, so you can feel like a live-studio audience of one.

LEGO VIP members can order the The F.R.I.E.N.D.S Apartments set ($149.99) starting on May 19. Everyone can grab it in LEGO Stores and at LEGO’s online store on June 1. The set follows LEGO’s 2019 Central Perk collection. If you put them all together you can basically write your own Friends scripts and act them out. But hopefully you’re not going broke buying all of them. And if you are, at least Friends will be there for you.