Kill Bill Comes to Your Dining Room Table with ‘Vengeance’

The revenge flick is so deeply embedded within our culture that to remove it would be akin to slicing off one’s own appendage. It encompasses nearly everything we admire – the rise of an underdog, the comeuppance of hubris, and tons and tons of blood. Yes, Gandhi wouldn’t approve, but Jean-Claude Van Damme would and I know who I’m picking in a fight.

Vengeance takes that spark of violent light and shapes it into a tabletop game that’s 100% badass. You and up to three competitors take on the role of a disenfranchised torture victim hell-bent on revenge. Perhaps you’re Lea Pistolera, a duel-wielding firebrand who had two of her fingers removed by Hell Riders. Or maybe you’re Johnny Silver, the tough-as-nails biker who was waterboarded and electrocuted by the Tengu-Kai. Either way, the pain train’s a-coming and a clueless crime boss is planted on the tracks.

Over two phases you compete to amass the most Vengeance Points (that’s VP sucka). You’ll power up and gain upgrades to create devastating combos. You’ll get your teeth kicked out and you’ll hopefully cave in the skulls attached to those boots. It’s a visceral game with expert pacing and a strong sense of drama.

At the beginning of play the wronging occurs. You’re drafting cards depicting gang bosses and choosing the ways your body’s been broken. There’s a number of subtle paths the draft can go from a strategic perspective. You can amass cards pertaining to the same gang or spread for diversity. Knowing what options your opponents leaned into can and should be responded to as well. 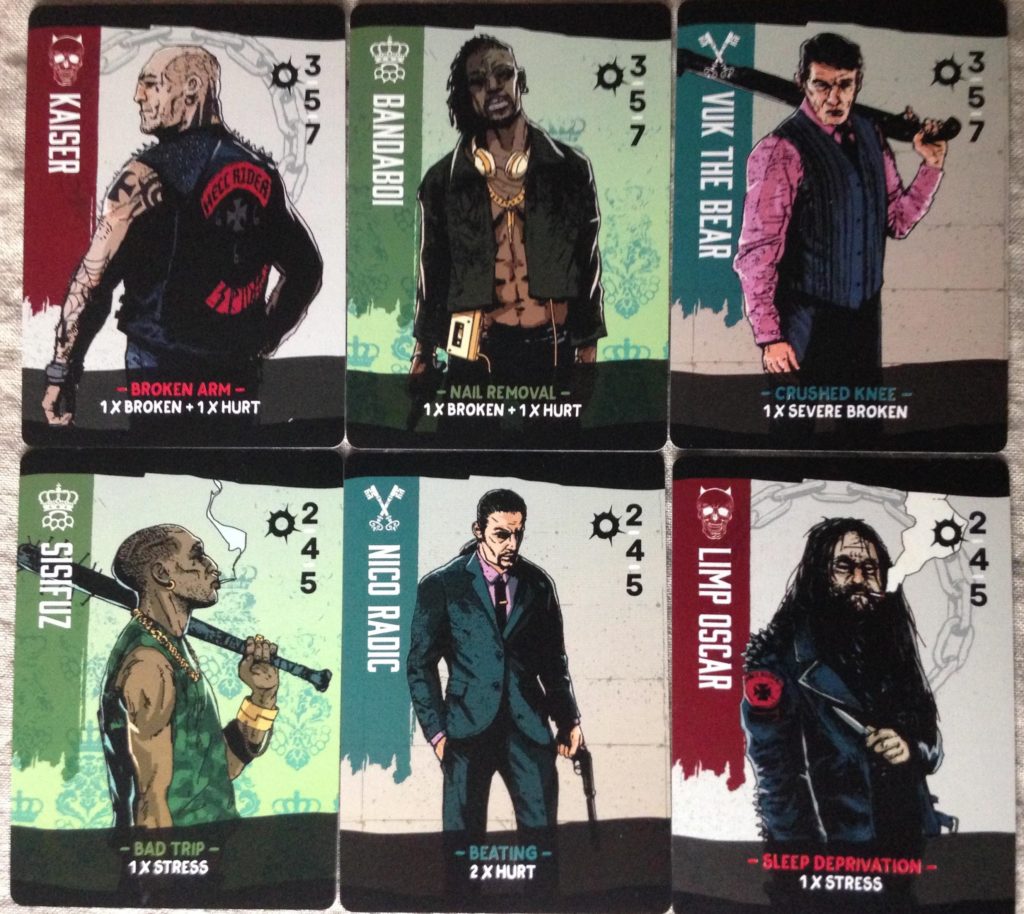 You then toss three down in front of you, dictating your early game objectives and who you’re hustling after. With a short series of decisions, you’ve set the foundation for your character arch as well as dictated your own storied abuse. These hardships even place damage to one of several tracks on your player board depending on the type and severity of torture that’s haunting you.

This player directed narrative prelude is a driving force for the game and can easily be overlooked as you’re dazzled by pretty miniatures and gorgeous illustrations. It dovetails seamlessly into the montage phase where you draft dice from a pool to lick those bloody wounds, perform reconnaissance on enemy lairs, and select improvements from a series of upgrades. Liam Neeson’s walking it off, cleaning his weapons, and torturing his own selection of fools. And it happens with only a few minutes of contemplative decision-making.

After the montage, we get to the good stuff. You take turns entering these wonderful cardboard tiles that appear as a small slice of a more typical dungeon crawler like Descent or Imperial Assault. Instead of Beastmen and Stormtroopers, you have Zuce Clan thugs and gunners. It’s a little less regal and a little more dope and grit.

The arena is surprisingly claustrophobic, reinforcing the intensity and presence of the puzzle-ly dice bloodbath that’s about to ensue. 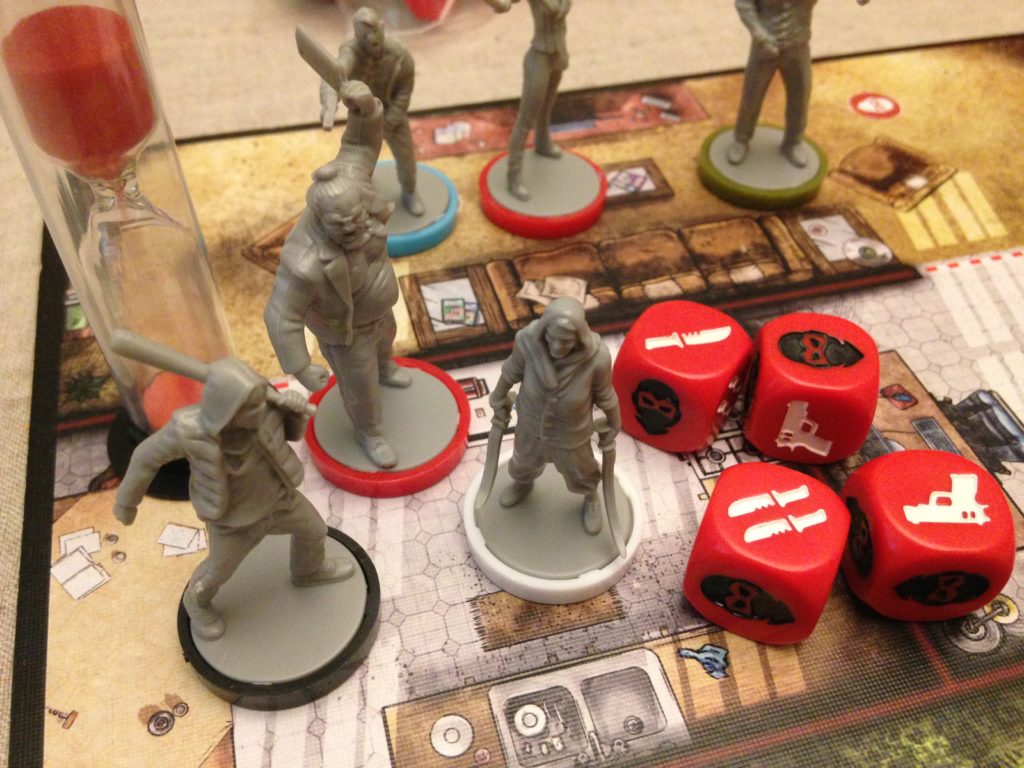 Combat itself is an individual affair, where you roll a small pool of dice dictating your actions. A sand-timer peacefully ticks away in the background giving you three minutes to resolve a trio of rolls. Why is the sand-timer so lovey-dovey? Well, it’s simply too long for the relatively simple process of decisions you need to make. You still feel a gentle sense of pressure, but it wouldn’t hurt to shave an entire minute off the thing.

The only junctures of a rushed cognitive challenge are when you’re tooled with upgrades and can convert dice in a multitude of ways. Maximizing your result can take a few moments, but we’re talking a minute and a half instead of a minute. Fortunately, the sense of empowerment from firing off a series of moves and slicing apart a fragile set of inhuman brutes is addictive. You’ll quickly forget about the inadequacies of the timer when you’re guzzling the blood of your foes.

Dice are spent on movement to propel yourself forward, on melee attacks against those who are close, and on ranged attacks for those who aren’t. Enemies activate if black masks come up which just gunna hurt.

The idea is to clear out the den and drive your knife through the boss figure’s little plastic skull. If you have the appropriate objective card in play then you can skin him for all he’s worth. The tricky part is when other players get in the way.

One of the potential criticisms of Vengeance is that there’s no direct interaction. Instead, you muck up each other’s death engine by opportunistically drafting dice or rushing dens. If I recon an enemy lair and see that Vuk the Bear is holed up there, a burly dude you’ve spent a great deal of effort amassing Vengeance cards for, I’m going to pour my dice draft into initiative and try to deny you that sweet revenge. And you’re going to cry, not because Vuk attached some electric clamps to your nipples, but because I strategically ganked your dinner and the kitchen’s closed.

This indirect interaction is not a problem, but it can feel a little like you’re working in your own isolated slice of the world; a pretty messed up world crammed full of torture victims and villains if you pause to think about.

There are other moments where a high-speed car can come out of nowhere and t-bone you. Players susceptible to over-analyzing moves can cause the setup rounds to drag. Additionally, the numerous types of enemy miniatures can cause cognitive difficulties early on in your revenge pro tour. There’s more than a fair amount of mechanisms crammed in here between the different sub-systems and everything can overwhelm those faint of heart. Although, if you’re signing up for a game with a golf-club wielding dude charging a group of thugs on the box cover, then your ventricles better be steely and robust. 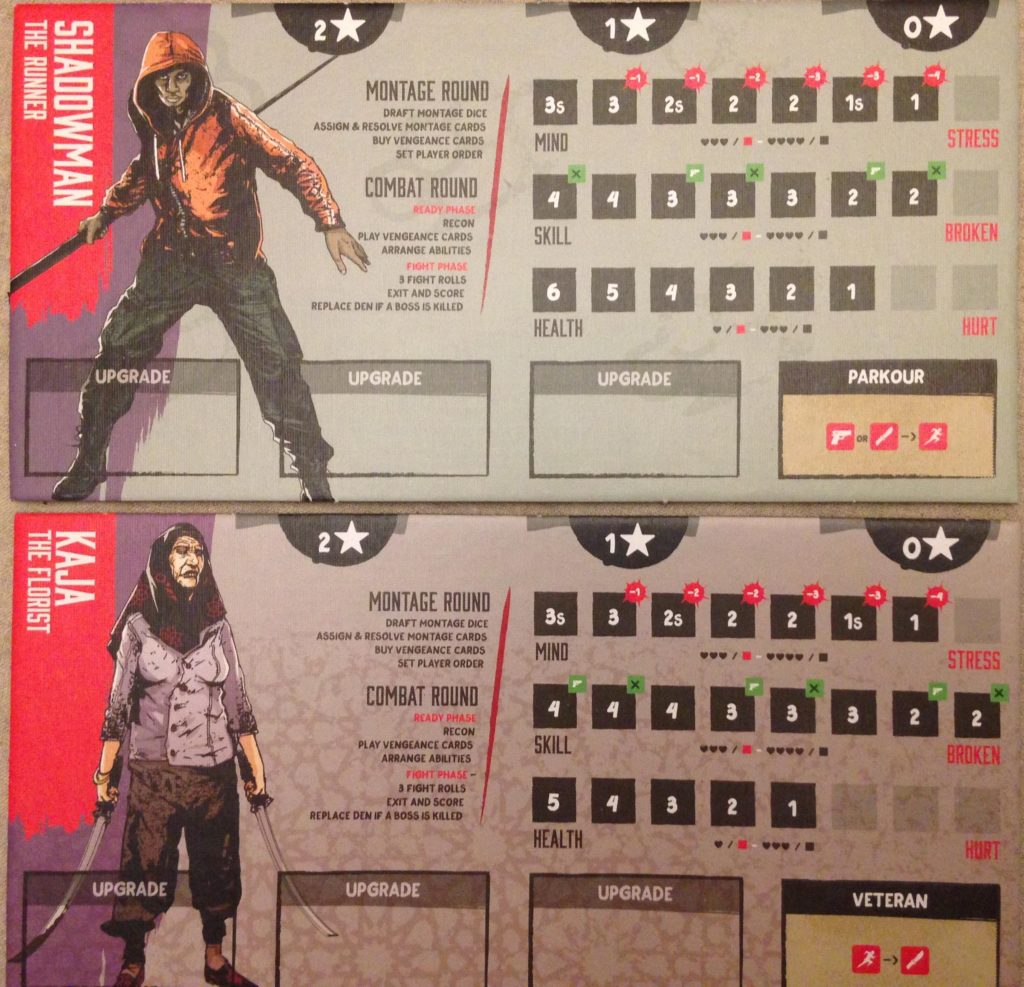 Those few quibbles aside, this game is a clear-cut winner. It has style in spades but it’s no stranger to substance. Vengeance is an expertly crafted design that feels iterated and refined. The pacing is perfect as play shifts between alternate phases of montage and combat, offering an ebb and flow that lifts you emotionally.

The most fantastic quality is the dual-perspective the different phases encapsulate. Venge-seekers are simultaneously thrust into the role of film director and actor; you not only get to play Uma Thurman but Quintin Tarantino as well. This all occurs through the control imparted in the wronging and montage phases, intertwined with the bloody fights. You’re not just an advocate but also are able to dictate tempo and execute editorial control. This blend heightens the sense of power and adds a level of immersion to the proceedings that is fascinating and unique.

Are you a fan of revenge films? Ever wanted to partake in one on your table top? Spill your guts in the comments!