For nearly sixty years, Kang the Conqueror has been one of the greatest villains the Avengers ever fought. Known alternately as Kang, Immortus, and several other names, this despot from the 31st century wants nothing less than to rule over all of time. And now, he’s an official part of the MCU, as played by Jonathan Majors on Loki. But it’s taken this many years for Kang to receive his own series at Marvel Comics.

The new five-issue series Kang the Conqueror comes from the writing duo of Jackson Lanzing and Collin Kelly (Green Arrow, Star Trek: Year Five), with art by Carlos Magno & Espen Grundetjern. We got the chance to chat with Lanzing and Kelly on the long-awaited solo series for the time-obsessed villain. Or is he really even a villain? Jackson and Kelly dive deep on the many, many versions of Kang, and how all these variants inform one life story told over five issues, as well as preview the first six pages from issue one. 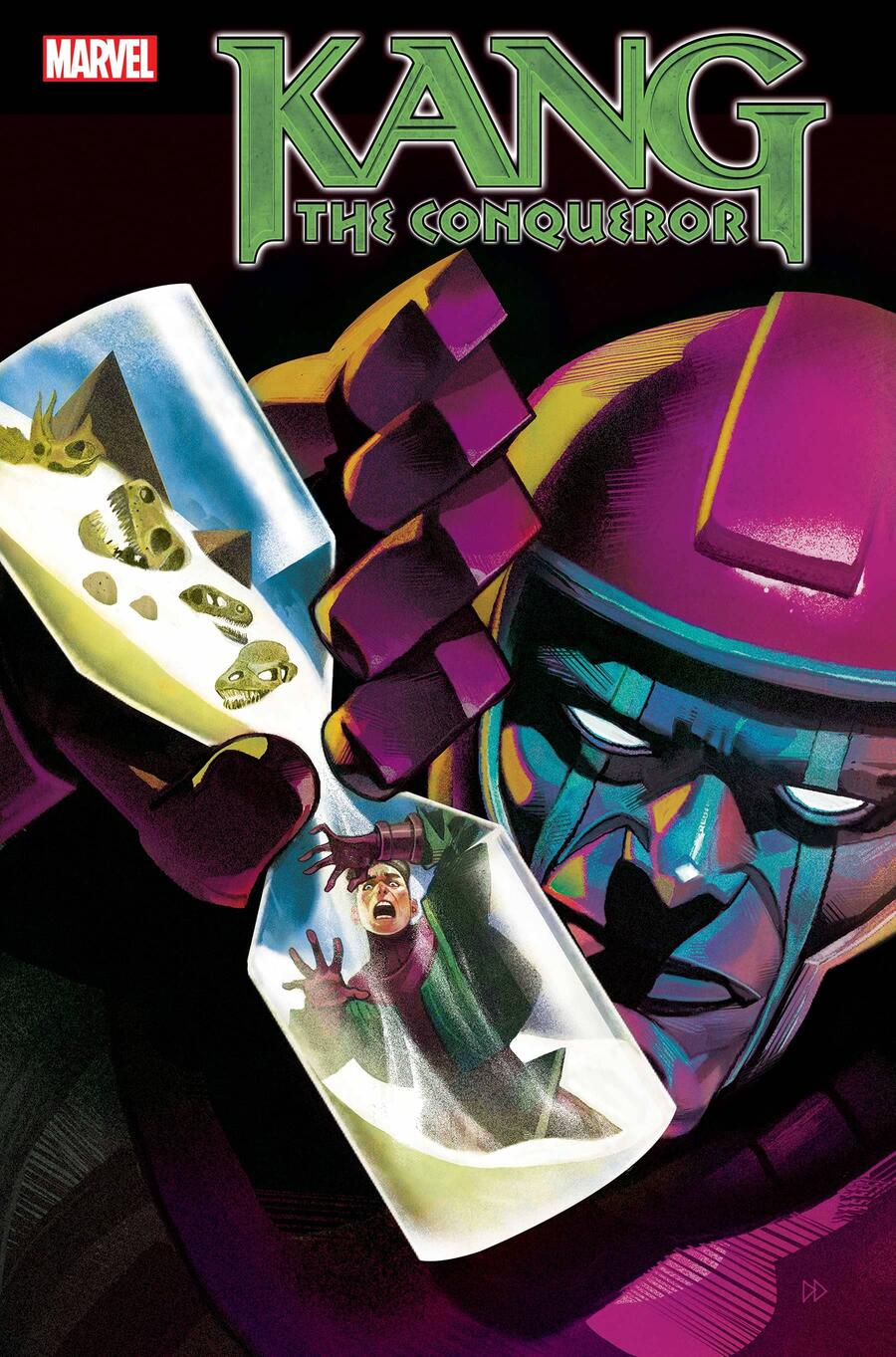 Nerdist: Is this limited series finally a fully fleshed out Kang origin story?

Collin Kelly: Issue one is Kang’s proper origin, and issues two through five are Kang’s life story. We are hoping to, by the end of issue five, take you through the entirety of King’s life. So that any Kang story that you have read over the course of the last several decades, you can look at it and see where it fits inside the secret history of Kang the Conqueror, and the personal story he’s been through. 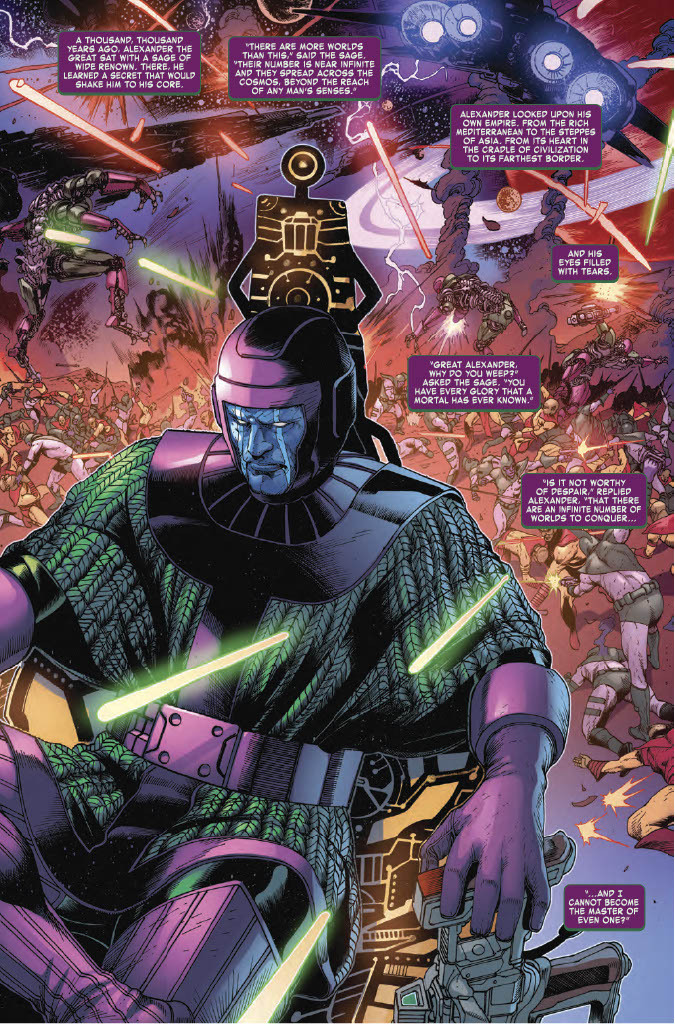 Nerdist: We know that Kang can be anywhere in time, but where is he at mentally? What is he hoping to accomplish in this series, besides obviously conquer everything from the beginning to the end of time?

Kelly: It’s kind of tricky, you’ll see what we do in issue one. The main character that we’re really following along with his life, and I know it sounds so corny, but he just wants love. He wants acceptance, and to find that human connection for who he is. And not what the universe means for him to be. Kind of the same thing that any kid who has been love starved wants, who hasn’t had that really strong adult influence in their life. You end up just kind of trying to grasp someone that can tell you it’s going to be okay, and you are going to be okay. 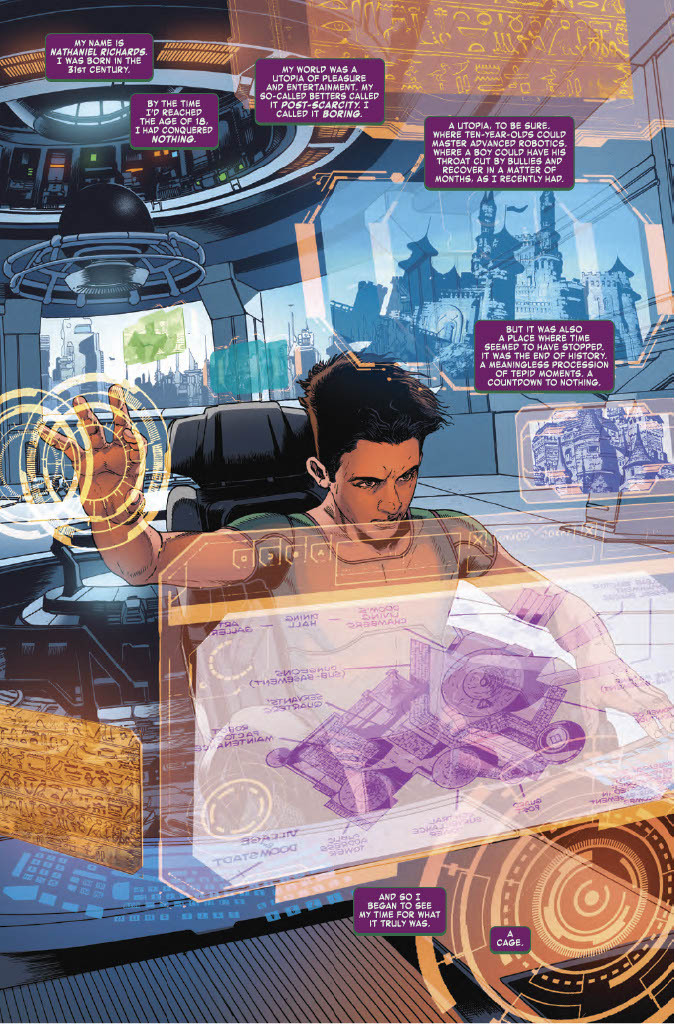 Lanzing: We became really surprised heading into this. Because we kind of thought it was going to be a book about fathers and sons. A book about how our elders train us. And then trying to fight that training, discovering that it’s harder to escape than we thought. We’re really going to look at what it’s like when this kid is just stuck as becoming Kang.

And then certainly once we got to issue three and four, we started digging deeper and deeper into [Kang’s love interest] Ravonna Renslayer. Ravonna became our entire backbone. She’s the key to the book in looking at what she means to Kang, and what he needs out of her. You start to see the personal and rather tragic story of a guy who cannot let go of love, and who cannot let go of loss. And who thinks that it’s the only thing that’s going to save him, when in fact it is in many ways, it’s the thing that dooms him. 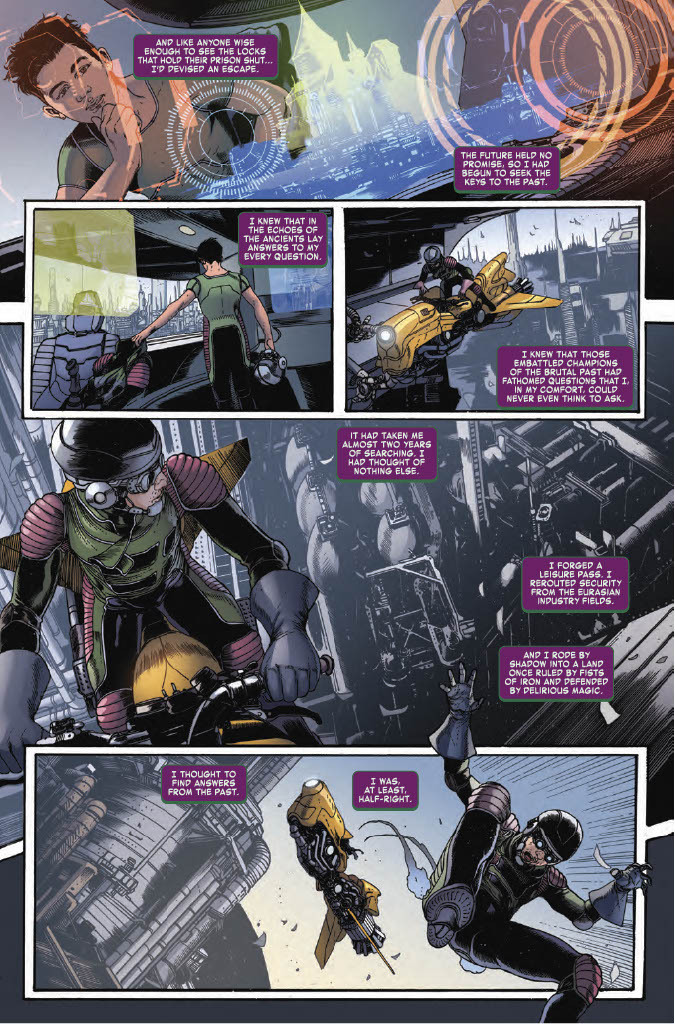 Nerdist: Will we only be reading about one Kang in particular, or will get glimpses of other Kangs across the Multiverse? Because I think Iron Lad probably has some points to make.

Lanzing: Iron Lad is also our favorite Kang. So we are absolutely going to be having some nods to Iron Lad. And if you want to know more about that, issue two is where that all drops out. But when we came to this project, we both fell in love with Kang the Conqueror through Young Avengers #1. That series came out in the exact right space for us. We’re both huge fans of that series, and what Allan Heinberg and Jim Cheung did on that book drew us both in. And that book’s release timed really well. Because it’s exactly when Collin and I met in college. So we both became rabid fans of Iron Lad in that book. And from there, we went and became bigger fans of Kang. 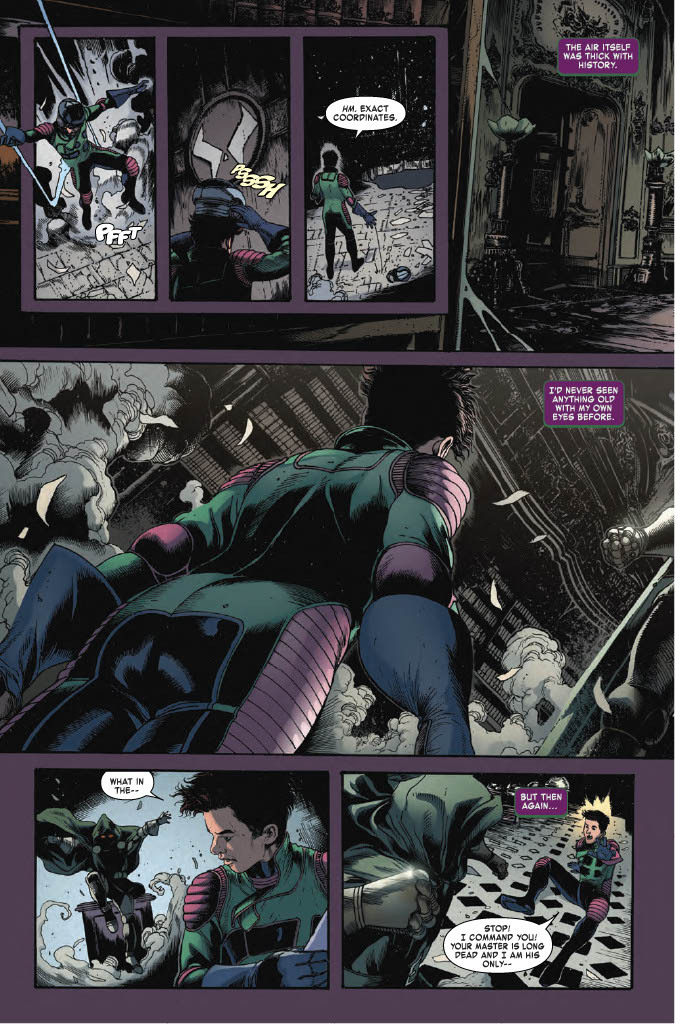 Over the years I’ve really enjoyed the fact that the character can facet into all these different directions. A big part of our pitch coming in on Kang  from the get-go was we want to put Kangs against Kangs. We want to look at what it means when this character has to deal, not with the Council of Kangs, because I think they’re going to really good job of kind of putting that back in its box, but rather just with his own legacy. His own self, his own sort of a trying timeline. And looking at how Iron Lad, Kang the Conquer, the Scarlet Centurion, and even Immortus to some degree, now all fit into that wide range.

Kelly: When you look at it from a certain perspective, you know, they’re all the same Kang, right? They are all variants of each other. They are all from a certain view, the same timeline. So really being able to look at him and how he’s grown and how he may have picked up different monikers, but it’s still the same fundamentally flawed a person, no matter what reality you find him in. That’s a really important story for us to tell about him. 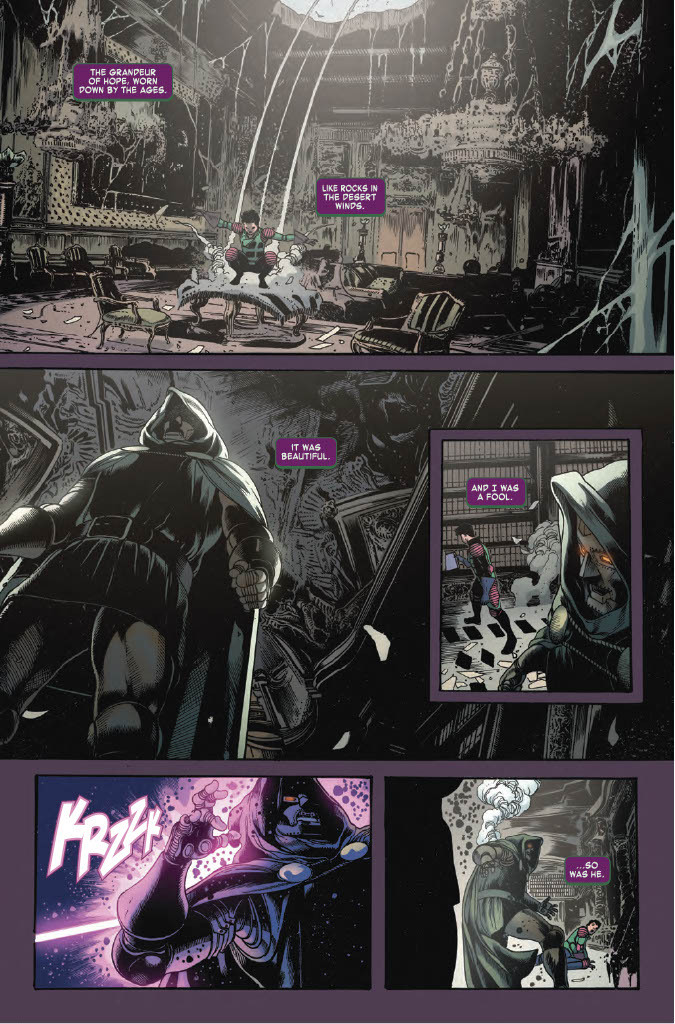 Lanzing: A lot of the villain origin comics are just going to take you through the standard story. They’re going to walk you through the character and let you understand how they “came to be a villain,” so to speak. We’re revealing in issue one, that Kang the Conqueror has been kind of lying about it. He’s been fibbing a little bit about where he came from, and exactly what his origin is. He reveals that his origins tie into his own future self. He is himself sort of an Ouroboros of a person.

We’re really hoping to get into the idea that Kang isn’t just Nate underneath Kang. He isn’t a true villain. He’s a kid who’s that’s abused and mistreated, and then love starved. And that all of those things are really going to lead to a life that’s going to desire conquest. So our hope is that we’re really giving you a ton of sympathy for this kid, even as we’re revealing to you that later on, he has lied for some fifty years about where he actually came from.

Nerdist: Kang’s family tree is a little messy. Can we expect any interactions with his ancestors? Or clarification of just who his ancestors actually are?

Lanzing: It’s a “Yes.” But really, it’s a “Yes, but.” Here’s the thing. There was something really lovely and useful about the fact that they’ve been very specific to never tell you officially what his lineage really is. Is he a descendant of the modern Nathaniel Richards? Or a descendant of his son Reed Richards? Maybe a descendant of Victor Von Doom? Is he somehow a descendant of all three? And the more that you define him that way [with a known lineage], I think the less interesting he becomes.

The fact that he is looking back at his history and saying “Yeah, I have an important ancestor somewhere in here” is kind of the point for him. It’s not that he knows all of his ancestries. It’s that he really wants to believe that he comes from something more powerful. He comes from this boring, boring world, and he wants to believe that he’s something more. So you’ll see what we do in the first six pages of Kang #1 to address this. To sort of talk about it a little bit and then to move on from it, because the real father to Kang… is Kang. 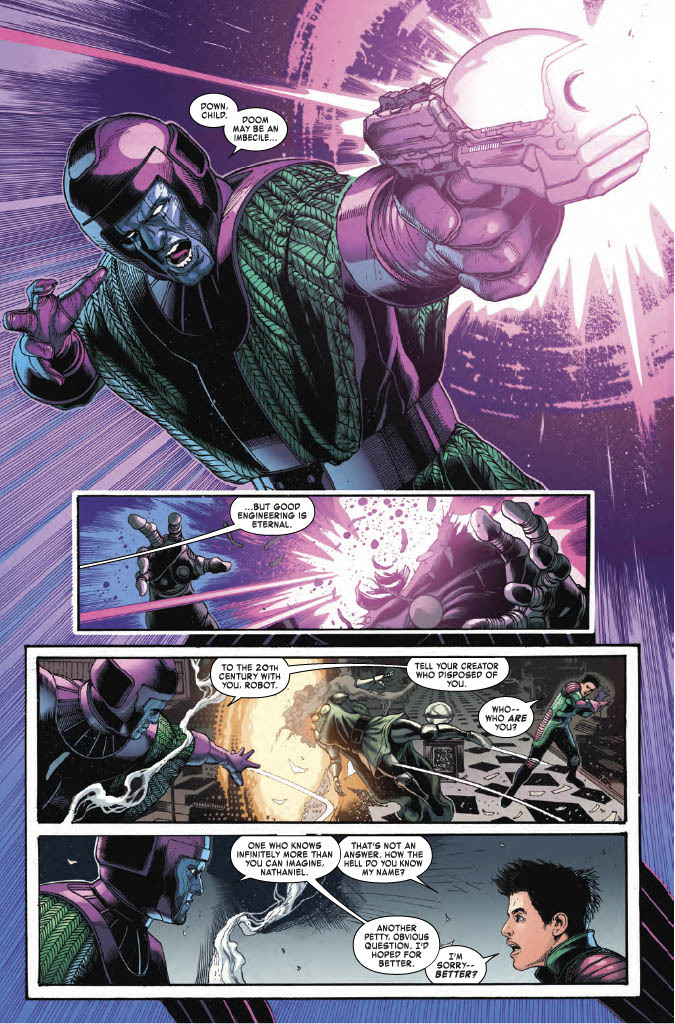 Nerdist: Kang is of course one of the Avengers’ greatest enemies, somewhere up there with Ultron and Thanos. Even though this is a Kang solo series, is his obsession with the Avengers something you’re going to deal with?

Kelly: We go into it a bit in issue three. But we are going to see it more in issue five. That’s when we really kind of dive into his overall obsession. This isn’t necessarily a man raised with a kind of single-minded determination to destroy the Avengers. You never have that kind of single-mindedness until a light switch flips. And something really changes in his life that builds that obsession. It’s something that we’re going to build to and eventually, really dive into.

Kelly: Weirdly, time travel and the two of us go back quite a ways. Both of us come from Hollywood originally and still live here. We’ve been telling time travel stories since we’ve met effectively. It was actually my senior thesis at school. So we cribbed from lots of things, including from Star Trek. We will talk your ears off when it comes to time travel1 But also when you ask about Trek specifically, it’s like, well, they’ve kind of done time travel in every way. And so has Marvel Comics.

Nerdist: Finally, I can’t help but wonder if Kang has his very own playlist. And what would be on it.

Lanzing: Yes! We do have a playlist. You can check it out on Spotify.

The first issue of Kang the Conqueror hits on August 18.