I still remember the first time that I watched Jurassic Park. Like many kids, I dreamed of growing up to be a paleontologist and could name 50 dinosaurs off the top of my head. But despite my excitement, the overwhelming memory I have is the fear and anticipation. The jolting horror of the brutal opening. The monster movie terror of the T. rex jeep attack. The adrenaline-filled exhilaration of the stampede sequence. The unbearable tension of the raptors in the kitchen. I loved every second of it. And with that trepidation came a sense of awe, which had nothing to do with the genetically engineered creatures and everything to do with the massive scope. That affecting combination is hard to recreate, but Netflix’s new animated series Jurassic World: Camp Cretaceous does a surprisingly great job.

From the very first episode, the show offers up legitimate thrills and visceral scares that lean into the best of the dino-disaster franchise. Just like every Jurassic Park story, the series begins with a setup that would make any public safety official weep and every personal injury attorney rejoice. Concurrent to the events of the 2015 movie that rebooted the franchise, a group of young teens have been brought in to test out the new summer camp for the Masrani Global Corporation.

There’s plenty of little things to love about the show: the kids are cute, their designs and personalities are impressively eclectic, the writing is funny and kind, and the main character Darius is the kind of hero we rarely get to see in action-adventure stories. All of that is great, but I’m really here to talk about those scares, of which there are plenty. Camp Cretaceous‘ biggest strength in this arena—pun very much intended—is the way that it uses the visual language, recognizable locations, and the mise en scene of the original series to establish fearful anticipation in a completely new medium and aesthetic that is far less obviously scary. 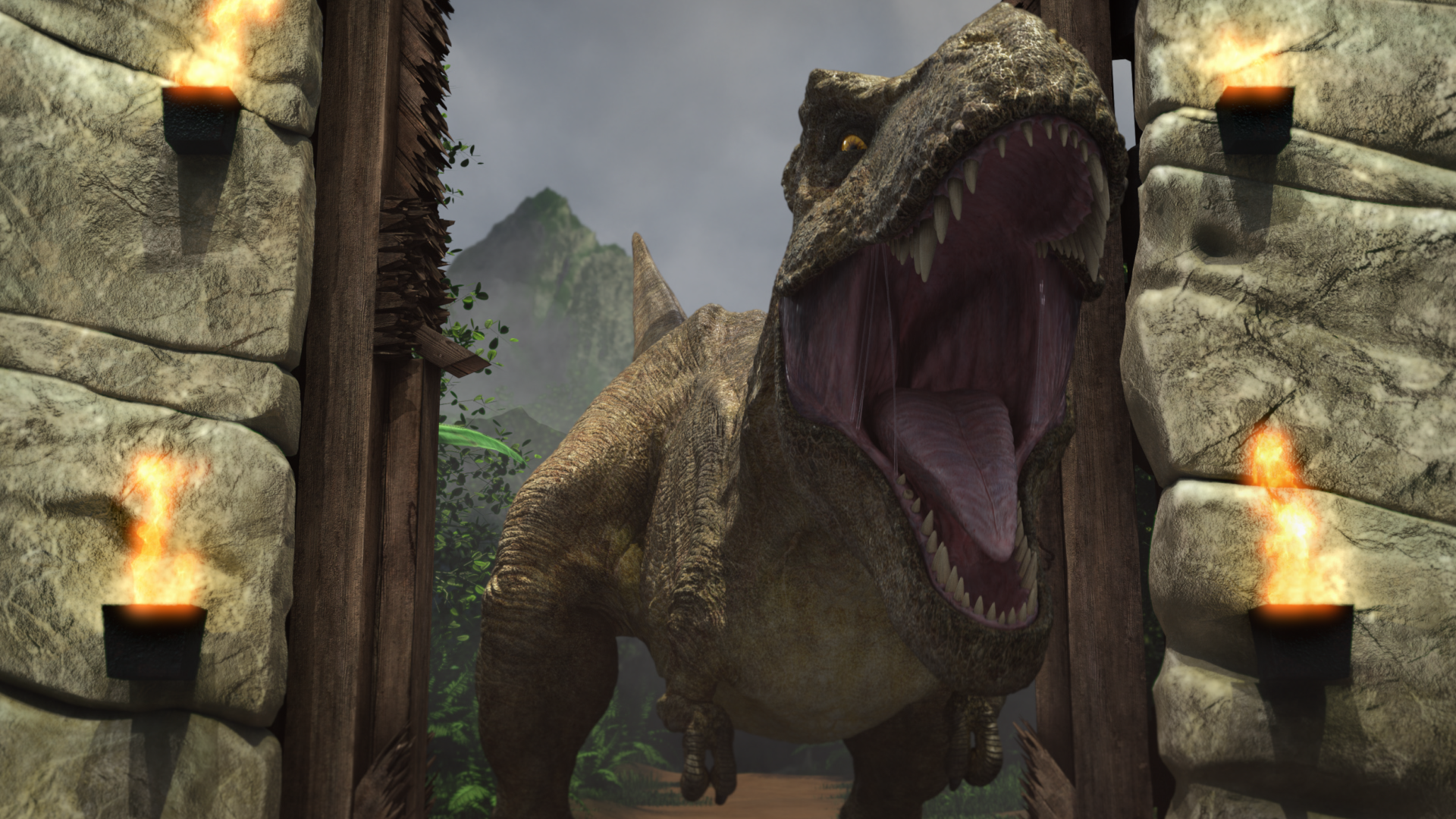 From the outset, Camp Cretaceous aims to capture the wonder of the park. As we’re seeing it through the eyes of children, that comes relatively naturally. Despite the small screen presentation, there’s still plenty of moments that showcase the scope of the island. A super cool treehouse that allows the viewer to overlook jungles filled with large trees that seem to extend forever. Later in the series, we get a particularly terrifying and beautiful moment where the kids catch the magnificent sight of a massive Brachiosaur wandering through the treetops before quickly realizing the lumbering herbivore is not alone.

The end of the premiere episode is our first hint at the horrors to come. Already left alone, the kids decide to do what any kid too young to remember the reality of Jurassic Park would do: they sneak out. Their quest leads them to the relatively safe Compy cage, where brave self-appointed VIP visitor Kenji offers to explore the cage for popular YouTuber Brooklyn and her millions of followers. The twist: the crew has actually wandered into the Velociraptor pen. 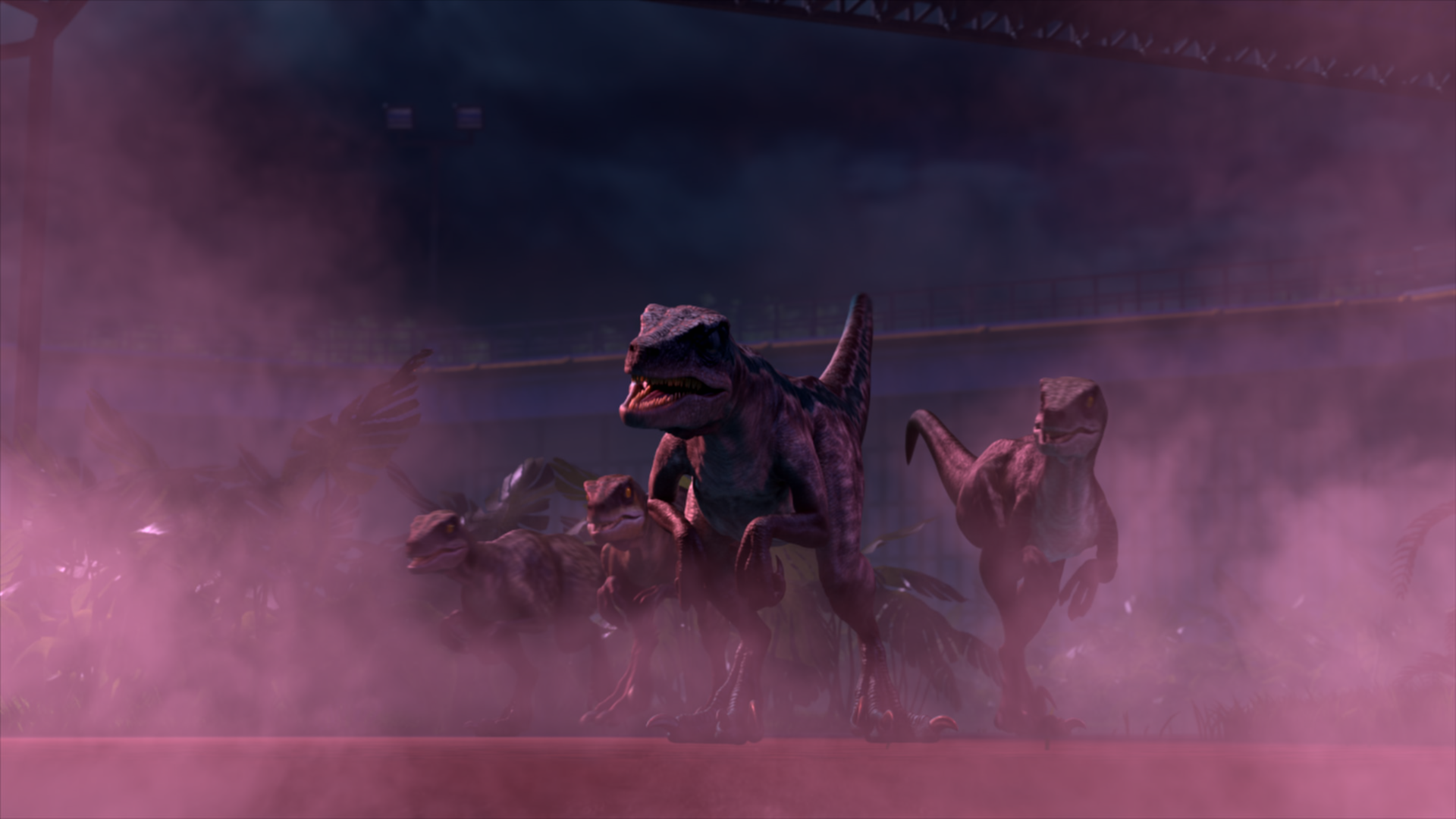 It would have been easy for the show to rely solely on the violent predators for the scare, but instead they seed it with some classic Jurassic Park tricks. Treetops shake, steam rises, and there’s an eerie silence all before dino-expert Darius whispers, “This isn’t the Compy enclosure.” Despite the soft-edged look of the series, a chill of fear ran through me. You know exactly what’s coming next, simply because of the clever use of tropes and visual clues that the sequence so smartly utilizes. It also works as a funny reassurance that the absolute disregard for health and safety Jurassic Park thrives on is still intact on this side of the island, even with a cast of young kids. Put it this way: even after that, all the kids are allowed to stay at camp with no repercussions and barely any adult supervision for the rest of the show.

Over eight episodes, we see the kids slowly come to terms with what’s going on in the wider park. What begins as a slow-burn series about the lack of responsible adults at an ill-advised summer camp quickly ramps up into a full-on survival story. Even as the action becomes more intense, Camp Cretaceous never loses sight of how the quiet moments before a dinosaur attack are some of the most frightening. One particular moment that sums the power of the show so well to me features an instantly recognizable location from Jurassic World. 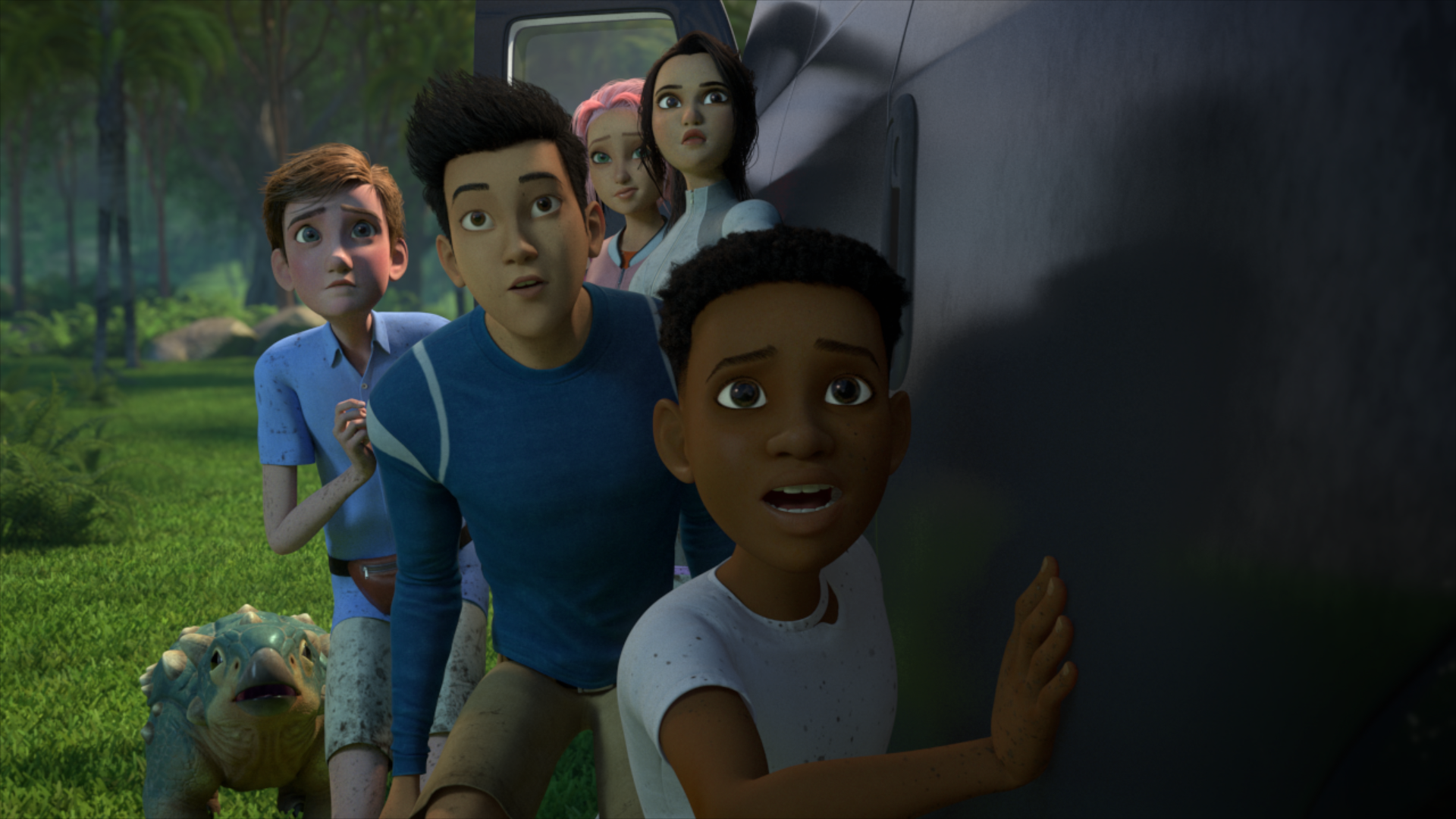 I’ve always had a deep fear of, well… deep water. The idea of something lurking beneath the surface has inspired many nightmares and panicked swims back to the nearest land. Those fears have always been intertwined with the excitement that comes from the thrill of terror. Like poking a cavity with your tongue, I’ve sought out as many terrible tales of terrifying sea creatures as I could, so I’m a huge fan of Jurassic World’s addition of the Mosasaurus. Whatever your feelings about the rebooted franchise, the introduction of Jurassic Lagoon has given the new films some of their most exciting moments, and Camp Cretaceous adds another. As the children aim to escape the rampaging dinosaurs, they find themselves on the River Adventure ride paddling kayaks through the park, but end up at the home of the Mosasaur.

It’s as scary as it sounds, literally making my knees wobble. And if you remember Jurassic World well enough, you’ll realize where the kids are long before they do. The sequence sums up just how well Camp Cretaceous embodies what makes the Jurassic Park films work, and if you’re a fan of those movies then you need to add this unexpectedly thrilling series to your watchlist.