In a recent laboratory study analyzing the likelihood of life on Jupiter’s moon Europa, NASA scientists discovered something bizarre. Europa’s nightside likely glows with a shimmering light. The scientists say that this is the case because Jupiter bombards the moon with radiation. And while the phenomenon hasn’t been observed directly, we could glimpse the “glow in the dark” moon sometime soon. 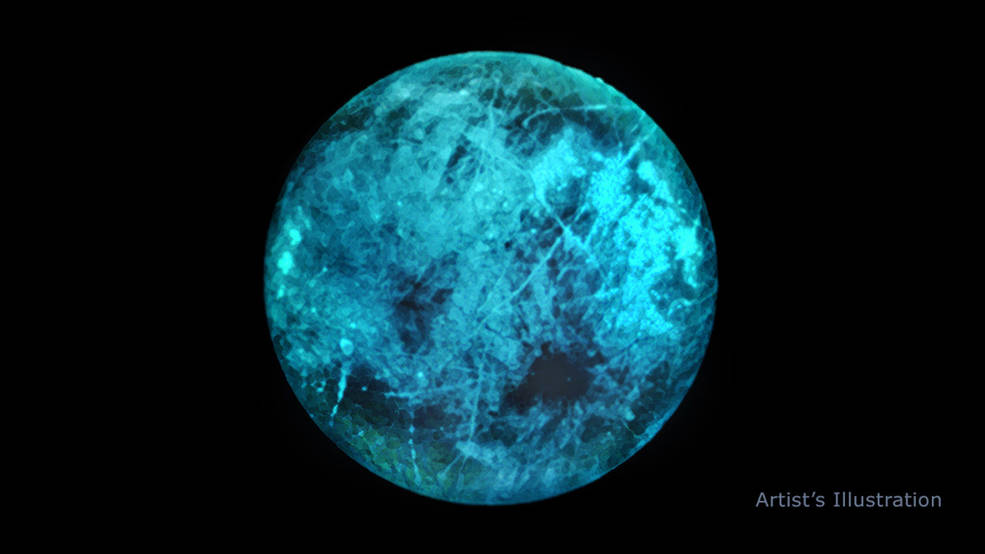 Science News reported on the discovery, which NASA announced in a recent press release. Dr. Murthy Gudipati at NASA’s Jet Propulsion Laboratory (JPL) and his colleagues were studying different compositions of ice and salts in order to reproduce the true makeup of Europa’s icy crust when they stumbled upon the glow.

“[W]e never imagined that we would see what we ended up seeing,” JPL’s Bryana Henderson said in NASA’s release. Henderson, who co-authored a paper published in Nature Astronomy describing the laboratory experiment’s findings, along with Gudipati and others, added, “When we tried new ice compositions, the glow looked different [each time].”

The glow is due to the interaction of the different ice compositions with radiation. On Europa, the moon’s icy crust is constantly hit with high-energy particles coming from Jupiter. (This is because Jupiter has an extraordinarily powerful magnetic field that fires off charged particles.) The radiation in turn energizes molecules in Europa’s crust. When they relax, they emit visible light.

“If Europa weren’t under this radiation, it would look the way our moon looks to us — dark on the shadowed side,” Gudipati said. “But because it’s bombarded by the radiation from Jupiter, it glows in the dark.”

There is an ocean of liquid water beneath the icy surface of Jupiter’s moon Europa. Could it harbor conditions suitable for life? To find out, our mission will conduct the most detailed survey of Europa ever attempted. Intrigued? Dive in: https://t.co/rORF6MH6rE #OceanWorlds pic.twitter.com/KqOAFSkBU6

In regards to what Europa’s glow would look like to the naked eye, it sounds quite X-Files-ish. The scientists say the nightside glow would “look sometimes slightly green, sometimes slightly blue or white and with varying degrees of brightness” thanks to the ice-crust’s varying compositions. These different color glows will put on more than just a light show, however.

“How [Europa’s] composition varies could give us clues about whether Europa harbors conditions suitable for life,” Gudipati added. Some time in the early 2020’s, NASA will launch its Europa Clipper mission to inspect Jupiter’s mysterious moon more closely. And, depending on what kind of glow Europa has, we may need to prepare ourselves for whatever radiation and salt water like to create in the dark.