If you were worried about the fate of Billy and Willy, the two goats who hit the tracks of the N train in Brooklyn yesterday, rest assured that they’re safe and sound now… and it’s all thanks to Jon Stewart.

Update: Jon Stewart, the ? herder? The former host of the @TheDailyShow, seen on the left, helped get 2 goats to an animal shelter upstate Monday. The goats traveled along the N line tracks in #Brooklyn in the afternoon. It’s not clear how they got there. Video: Farm Sanctuary. pic.twitter.com/iUur2H8a6g

The former The Daily Show host and his wife co-own one of the four locations of Farm Sanctuary, an animal advocacy organization based in New Jersey and upstate New York. They answered the call when Billy and Willy found their way to the subway line’s route through Borough Park, Brooklyn. (And this isn’t even the first time Stewart has done something like this.)

Let’s be candid for a moment here: Subway interruptions are extremely common in New York and, more often than not, barely worth mentioning. But when there are goats and a celebrity involved, that’s something to talk about.

After NYPD Emergency Service Unit officers tranquilized the goats, they were handed off to Brooklyn’s Animal Care and Control, from which Stewart claimed them. They’re now at the Watkins Glen Farm Sanctuary, where they were christened with their names. Presumably, Billy and Willy are frolicking through a cornfield, but we have no photographic proof of that. Yet.

New York hasn’t seen anything like this since the storied subway kittens of 2013. Those two popped up on a stretch of the B and Q lines and prompted a two-hour shutdown. 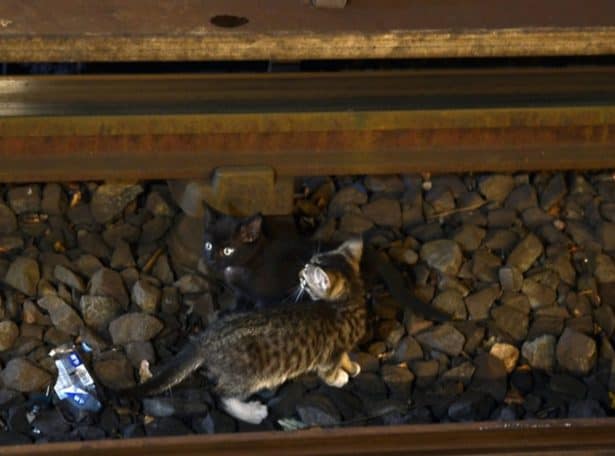 As I recall, no one stayed mad about it for long because, well, look at them. Suffice it to say it’s not every day an animal wanders across the subway tracks, and when a beloved comedian gets involved, it’s even more headline-worthy than usual.

Which animal do you want to see daringly rescued from the subway tracks next? Let us know in the comments!