IT CHAPTER TWO Nearly Bites Off Too Much (Review) - Nerdist

IT CHAPTER TWO Nearly Bites Off Too Much (Review)

Stephen King’s novel It is over 1,100 pages long. Not even the most intrepid of movie makers could have squeezed it into a single movie. Director Andy Muschietti, screenwriter Gary Dauberman, and their collaborators did a pretty amazing job; they laser focused that expansive tome into its most essential elements for the 2017 movie. After that massive success, IT Chapter Two needs to spend a lot more shoe leather to bring the story to a satisfactory end. It mostly does, though the seams are much more evident.

Setting the entire first film among the child versions of the characters was a clear (and successful) ploy to exploit the ’80s nostalgia of Stranger Things; Finn Wolfhard’s casting made sure everyone knew it. By and large, Chapter Two did an amazing job casting the adult actors who’d play the grown-up versions of these characters, mixing in stars with solid character actors who really resemble the kids. This presents the major problem, then, with IT Chapter Two. The filmmakers feel beholden to constantly flashing back to the kids. Newly filmed (and de-aged) scenes with the young actors take up much more time than they should. They act as a shorthand for character development I wish the adult actors got to play.

But first things first. Chapter Two takes place 27 years after the first movie. Though our hero kids were victorious over the monster clown Pennywise (Bill Skarsgård), he’s back to devour children and cast out adults in Derry, Maine. Mike Hanlon (Isaiah Mustafa) is the only Loser who’s remained and he sets out to bring everyone back. Thing is, once they left Derry, the other Losers forgot everything about Pennywise. Funny, that. So before they can defeat the evil clown, they have to deal with their childhood trauma… which Pennywise of course exploits. 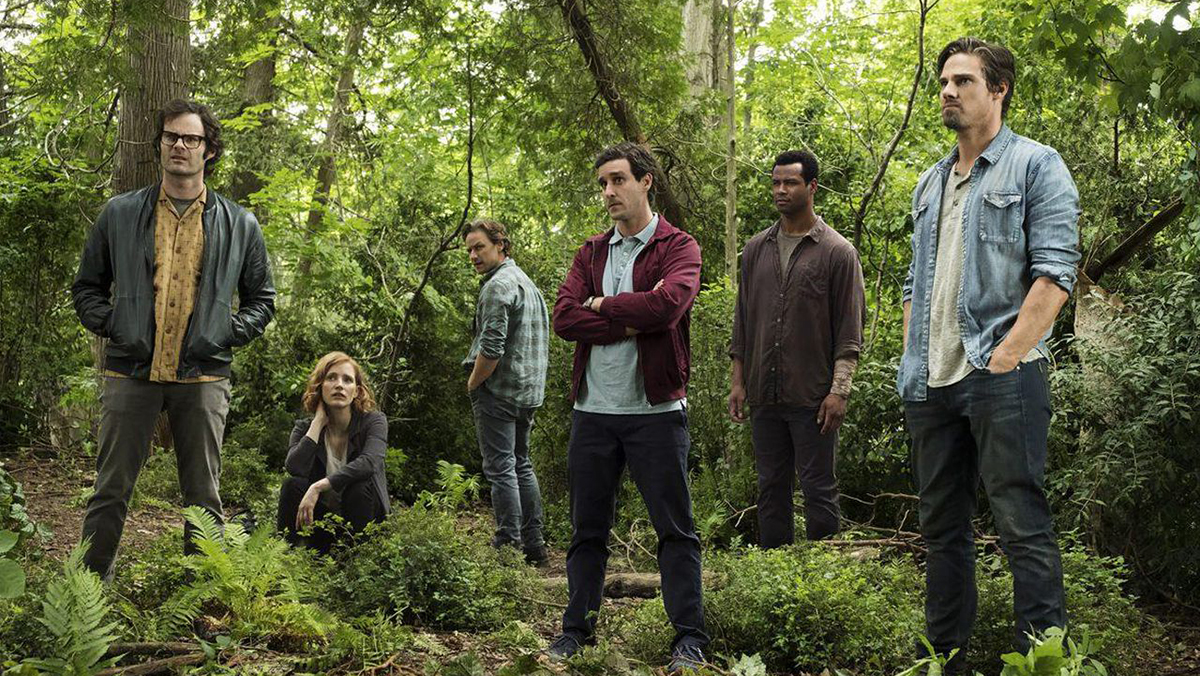 There’s much more of a quest narrative to the bulk of this movie than I expected. Each adult has to go find a relic of their childhood to battle Pennywise. Some of these are good (Jessica Chastain’s encounter with a creepy old lady and Bill Hader’s run-in with a Paul Bunyan statue are standouts). But they aren’t all necessary and add roughly 40 extra minutes to an already long movie. And it seems a weird thing to say in a horror movie, but too many extended spookhouse sequences lessen the impact of each one.

At close to a three-hour runtime, the cuttable scenes in IT Chapter Two are even more apparent. But that’s not to say the movie doesn’t work, because it does. Still present are the slow-building scares. These usually culminate in Pennywise (or a proxy) effectively going “Boogedy boogedy boogedy” while running at our characters. These kinds of scares, which are somewhere between cheap jump scare and existential dread, feel unique to the IT movies and make for Chapter Two‘s most effective moments. James McAvoy’s grown-up Bill trying desperately to reach a little kid in a carnival house of mirrors is just terrific, as is an early scene where a rejuvenated Pennywise tempts a little girl using the same cutesy, friendly dialogue that saw poor Georgie meet his end in the first movie.

I think the biggest issue with the movie is that the Losers are apart for too long. I want to see them interact and return to a cohesive unit the way they were as kids. Cutting back to the the actual kids is not the same as having grown-up character development. And because the movie is so long, and the amount of the book they still had to cover so copious, it often feels like plot and character get sidetracked in favor of yet another, repetitive scare.

But once we get to the end, and the movie finally catches up to the odd Lovecraftian cosmicism of the book, and the group’s ultimate battle with Pennywise, it’s great. Throughout, Muschietti finds moments for levity, and peril, and fear, and deep sadness in service of a pretty darn satisfying denouement. Even though the movie feels cluttered, the heart of the characters and their story is still present. The metaphor of troubled adults dealing with their childhood trauma, literally returning to the moment of their greatest strife, is particularly strong. I didn’t want IT Chapter Two to forget the past, but I wish it didn’t depend on it quite so much. But I guess we’re all guilty of that from time to time.

I think fans of Stephen King are going to really enjoy IT Chapter Two, as are fans of the first movie. It’s just not quite as pure an experience as part one. But is adulthood ever as pure as childhood?