IN THE MOUTH OF MADNESS Is John Carpenter’s Surreal Masterpiece

John Carpenter’s name is synonymous with horror. His 1978 movie Halloween is a slasher staple and one of the most successful and beloved films in the genre. But the Kentucky native, who grew up on Westerns and science fiction B-movies, also gave us The Fog, The Thing, Christine, They Live, and the utterly singular In The Mouth of Madness.

The latter celebrates its 25th anniversary this week, and it’s unlike anything else in Carpenter’s oeuvre–both referential and fully its own contorted, ugly, surreal beast. Released in 1994, it initially struggled to find an audience or acclaim. It debuted in fourth place at the domestic box office and slipped steeply out of the box office Top Ten in subsequent weeks. The Rotten Tomatoes score is also less than impressive, sitting at 59%. Siskel and Ebert gave it mixed reviews. But like most Carpenter fare, it found a cult audience eventually, and has blossomed into a revered classic. And for good reason: In The Mouth of Madness is a genuine horror masterpiece.

The film follows John Trent (Sam Neill), an insurance investigator who, after a bizarre encounter with an axe-wielding madman in New York City, is roped into a wild conspiracy that defies time and space and sanity. While lunching with a colleague, he’s approached by the axeman, who asks him a simple question: “Do you read Sutter Cane?” He then attacks, but is shot dead by police before he can harm Trent. 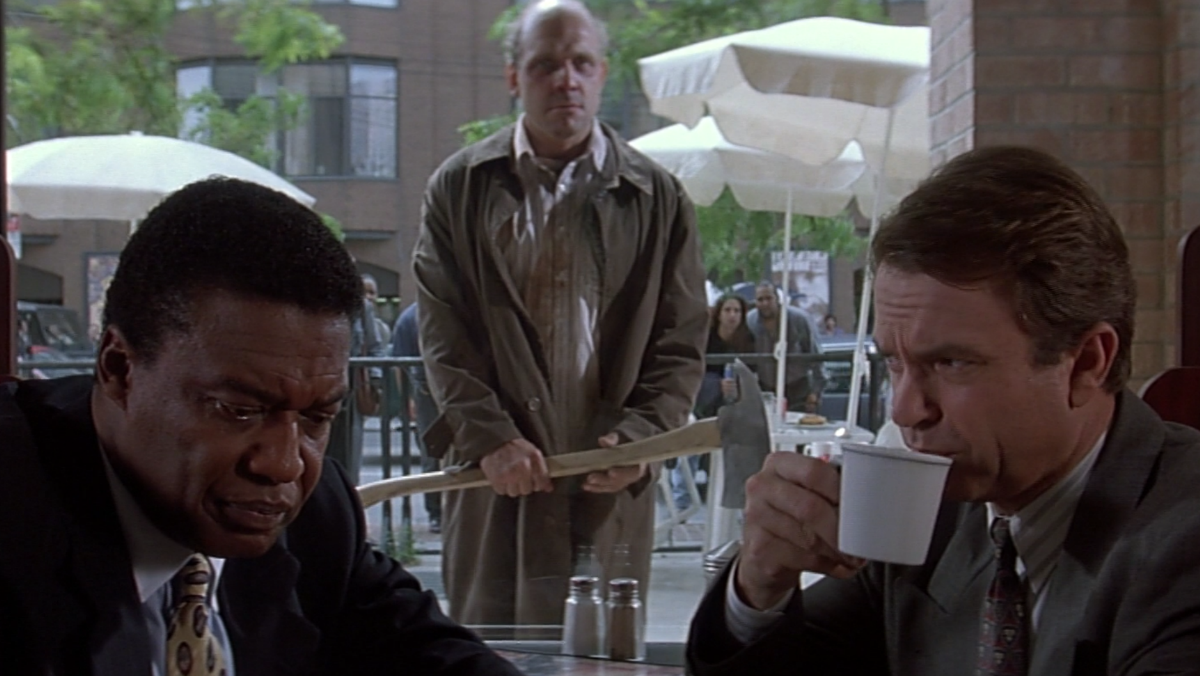 Trent then meets with the director of Arcane Publishing Jackson Harglow (Charlton Heston), the boss of the axeman while he worked as an agent for recently-disappeared Arcane prize writer Sutter Cane (Jürgen Prochnow). Harglow tasks Trent with finding Cane and the manuscript to his latest novel, which allegedly drives those who read it insane. After piecing together some clues, Trent comes to the conclusion that Cane may be hiding at the New Hampshire location where he set the fictional town of Hobb’s End. He travels to the area with Cane’s editor, Linda Styles (Julie Carmen), but it’s no ordinary trip. They experience bizarre phenomena on the way there, including what appears to be some kind of time warp that transplants them to the town in broad daylight no matter what hour of the night.

That’s only the beginning of the odd things that await them in Hobb’s End. The allegedly fictional town appears to actually exist, but Trent–ever the skeptic–initially believes it’s a stunt. He’s not entirely wrong; Styles confesses that Cane fabricated his “disappearance” to promote the book, but the town setup and time warps were never part of the plan. She eventually encounters Cane at a church in Hobb’s End, reads his manuscript, and goes insane. Trent tries to escape the town, but the time warp prevents this. He wakes up in the church with Styles and Cane explains that the public’s belief in his books have freed an ancient race of monsters who want to reclaim Earth. He also reveals to Trent that he is a character in his book.

If you’re familiar with the work of H.P. Lovecraft, this will all sound familiar. In The Mouth of Madness was written by producer and screenwriter Michael De Luca, based on the works of genre writer Lovecraft. The title itself is derived from Lovecraft’s novella At The Mountains of Madness, and many of Cane’s novel titles are Lovecraft references. The plot of the film deals with insanity, a theme of many of Lovecraft’s works. There is also a likeness to Stephen King, another East Coast horror writer who, like Cane, is a blockbuster publishing phenom. 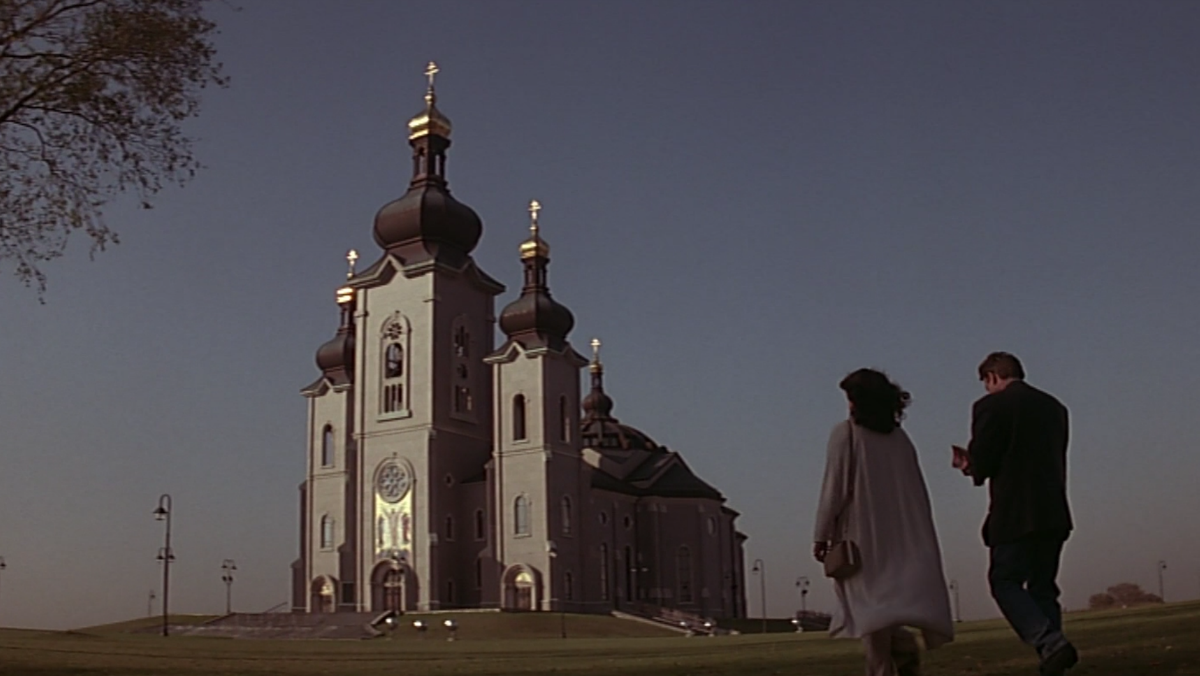 The Lovecraftian nature of the film is what tips it from standard horror into something nearly unquantifiable; a bizarro story that distorts all sense of comfort, discombobulating the audience so that by the end you feel as displaced as Trent. It’s a movie that erodes all logic and sense of perception, looping us into the time warps and making us question the very fabric of reality.

The hotel where Trent and Styles stay is a prime example of the film’s ability to get under the skin. When they first check in, an elderly woman named Mrs. Pickman ( another Lovecraft reference) greets them. As Trent talks to her, Styles gazes at a painting on the wall resembling the two of them, and it morphs as she looks at it, causing her to believe she and Trent are players in Cane’s demented story. He’s still skeptical but we the audience know something is going on–something that defies easy explanation. We are slowly coming under the movie’s–and Sutter Cane’s–spell.

But it’s not just the plot mechanics that make In The Mouth of Madness such a fascinating, surreal specimen. It’s the visual style that Carpenter implements, and the growing sense of dread articulated in the production design. Hobb’s End looks both quaint and peculiar, with an almost Lynchian vibe of the rot that exists in the margins of perfection. Mrs. Pickman looks like your grandmother, but beneath her desk is a molting body chained to the floor. The townspeople, slowly transforming into monsters, look like chilling hybrids. Everything is familiar, but a few degrees to the left. 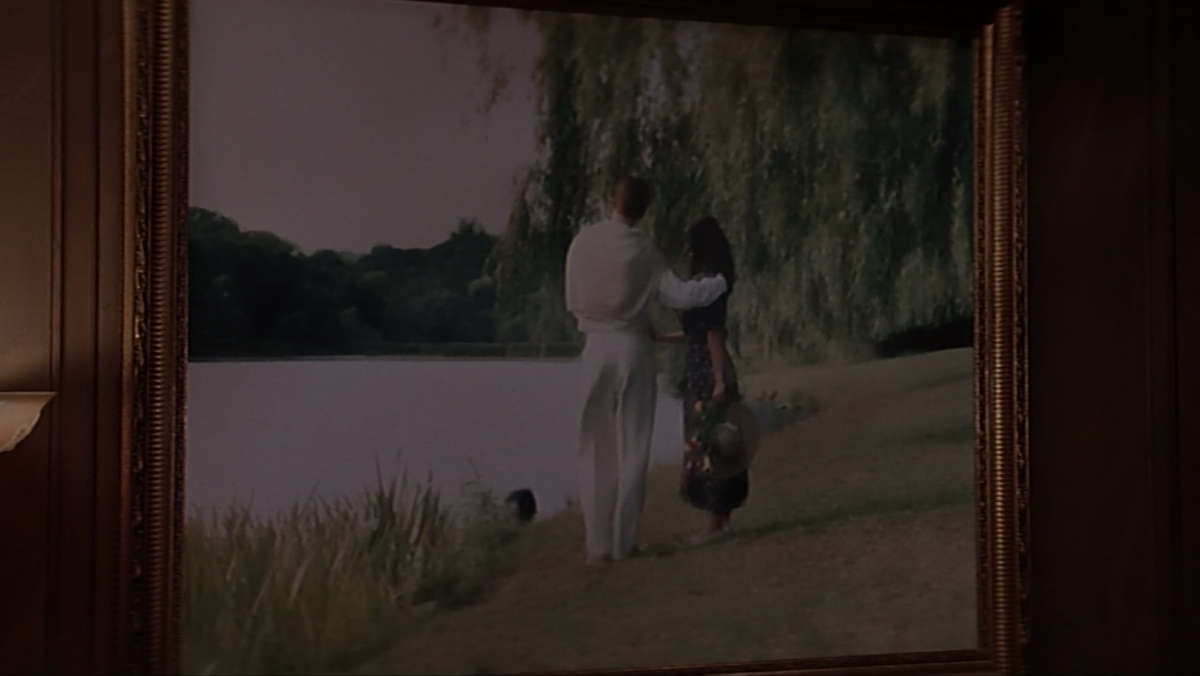 Cane creates a tunnel-like portal that seemingly transplants Trent back to reality, where he learns that In The Mouth of Madness–the title of Cane’s manuscript–has already been published and turned into a movie, and that Styles never existed; moreover, Trent took a trip to New Hampshire on his own. But again, this sense of safety dissolves, and Trent becomes the axeman himself, murdering a Cane reader and landing himself in an asylum. This time, however, the cycle is broken; during a storm, the asylum is abandoned, and Trent hears on the radio that the monsters of Cane’s story have manifested and are enacting an apocalyptic event. Trent stumbles from his confines and to a local movie theater, where we watches the film adaptation of In The Mouth of Madness and sees that he’s playing the main character–and that he was always a character in this story, never a real person.

It’s intentionally creepy, and makes us wonder what sort of animals we might be in the own story of this universe. Are we willingly acting out the motions of our lives, or are we rats in a maze; participants in a master storyteller’s scheme? Maybe it’s better not to know, lest we end up like John Trent, alone in a movie theater, witnessing the meaninglessness of everything. Maybe it’s better to simply read Sutter Cane, and not know what he is or what he’s capable of. It takes a true horror master like Carpenter to so brilliantly manifest thoughts like these, thoughts far scarier than men in masks. In The Mouth of Madness gets into your psyche and refuses to leave–the sign of a true piece of genius.

TAGGED: Halloween, In the Mouth of Madness, John Carpenter, The Fog