In 'Hellapagos' You'll Work Together, But Only Until The Food Runs Out - Nerdist

In ‘Hellapagos’ You’ll Work Together, But Only Until The Food Runs Out

How well do you work together with your friends? Pretty well? OK, how well would you work together when there’s only enough food for one person but there are six of you who are hungry? Hellapagos, published by Gigamic will help you find out.  At the start of the game, three to twelve people have been shipwrecked on an island and you need to build a raft big enough for each of you to escape. You’ll also need to gather food and water while you do it, and some tools and supplies from the sunken ship could help as well. The problem is that there’s a storm coming your way and if you don’t make it off the island before the storm hits, none of you are going to make it.

So that sounds easy then, right? Simply work together, gather the materials you need, and escape the island. The main issue, of course, is your pesky stomach. See, every day you spend building that raft, you’ll also need to eat and drink. You start with about two days’ worth of supplies, but the raft will take much longer than that to build, so everyone will have to split their time between building, gathering water, fishing, and searching the shipwreck for anything of value. 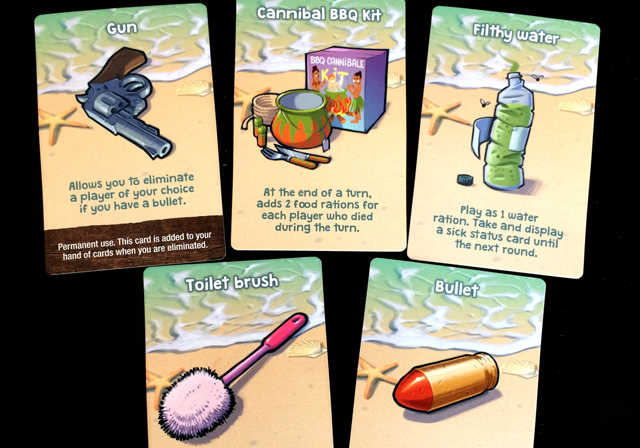 The success of each of these actions is conditional on something. Searching the shipwreck and fishing are pure luck, gathering water depends on the weather that day, and when you collect wood you’ll always get one piece, but if you want more (and you will) you need to go deep into the jungle and look for up to five more pieces. However, the deeper you look, the higher the chance that you’ll get bitten by a snake. If that happens, you lose all of the wood (including that first piece) and will be completely useless until the next day ends as you convalesce (you can neither vote nor play cards.) 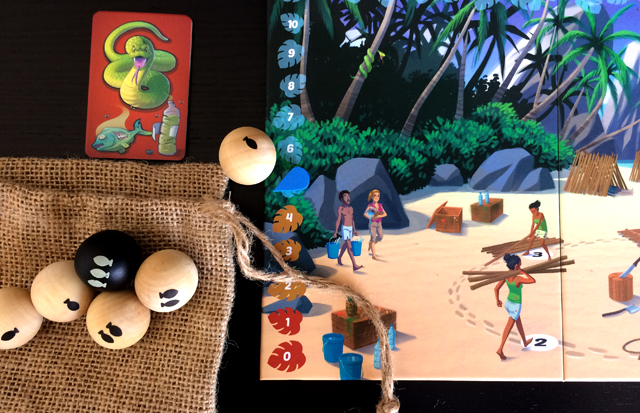 The tension really kicks in when your supplies start running out. At the end of each day, you all need to drink and eat (in that order), but if you don’t have enough of either water or food, then you have to start making some hard choices. Let’s say you’re short by one water and one food. Each survivor will then vote simultaneously by pointing at another survivor. Whoever has the most votes is deprived of water and dies. Horrible as that is, you now have one less mouth to feed, which means that you have just enough food to go around. And that moment is when every player starts looking at each other and asking themselves “do we really all need to escape?”

Now, you can’t just take an underbuilt raft and leave early. You’ll need to have a raft big enough to take all of the surviving players, as well as extra food and water for the journey. However, as soon as the storm comes, all bets are off. You’ll have one more day to finish building, fishing, and scavenging and then someone is leaving the island. If your raft isn’t big enough or you don’t have enough food or water for everyone, then you’ll have one last round of voting to see who has to stay. The rest of you get to sail off into the distance while the people you left behind tragically die in the storm. You monster. 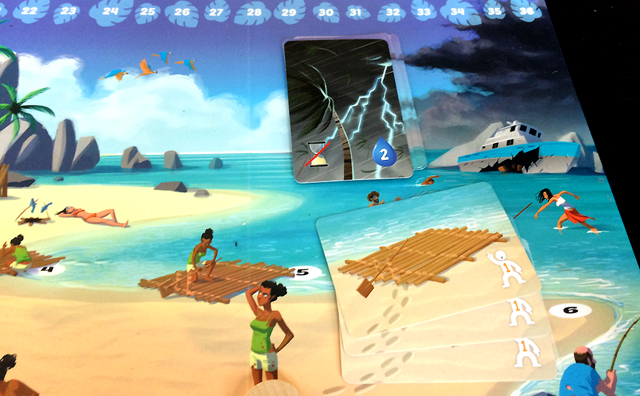 Hellapagos, when played as planned, is a true cooperative game. When things go sideways, the betrayal mechanics kick in. There’s enthusiastic collaboration and you want to collectively succeed if only to avoid the possibility of the heartbreak of running out of food and choosing someone to die. The game’s dynamics also change based on your group’s social dynamics: team-oriented groups who don’t want to leave anyone behind will play much differently than a group of gamers who may be more self-serving. If you end up leaving someone behind, it’s a game you’ll  want to play another round of if only to get everyone off the dang island this time! This is an excellent lightweight game for 3-12 people (and taking 20-60 minutes, depending on player count) that you’ll be playing over and over again.

Hellapagos is available now – swing by your friendly local gaming store and ask for it!