If You Like Star Wars, You'll Love Vision of Escaflowne - Nerdist

If You Like Star Wars, You’ll Love Vision of Escaflowne

At last, the claim put forth in our headline has the backing of Wizard Magazine! Or more specifically, the Toons special Wizard put out for Fall ’98. Its cover heralded the arrival of Pokémon, but I was far more intrigued by its listicle profiling good anime for newcomers. Out of the ten recs, the (then) upcoming Vision of Escaflowne actually proved life-changing for me. I’d only been a sporadic viewer of anime, but after hunting down every Escaflowne tape at the rental store, a love affair began that has, essentially, led to me writing here. So, I can say with certainty that this is excellent entry-level anime.

What was the hook, though? Well, Wizard pitched a “Star Wars for anime”–a classic love triangle set amid a rebellion against an evil empire–and the comparison still holds. The “sub boss” is even a morally conflicted anti-hero with an all-too-personal connection to the lead. 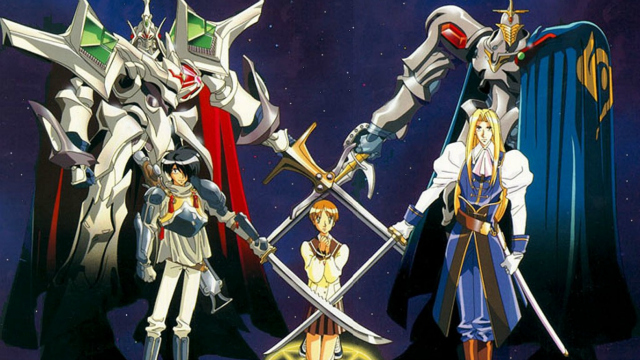 We follow teenage runner, Hitomi, after a dash around her high school’s track inexplicably leads her into a parallel world. Before she can get her bearings, the brash Prince Van saves her from a dragon, and the two quickly become fugitives in the land of “Gaea,” ever evading the evil Zaibach empire’s forces. Van and Hitomi barely get along, and their tension is only exacerbated when the chivalrous knight, Allen, joins their questing band. Allen’s actually the spitting image of Hitomi’s high school crush, and that’s just one of many coincidences awaiting in Gaea. The girl’s fortune telling hobby will prove to hold global significance.

One of Escaflowne‘s best merits is its brisk pacing–especially in contrast to the laborious, drawn-out plotting that can typify anime. That swiftness also makes it tough to summarize. The show takes so many twists and turns over 26 episodes that it feels like a true, meaty epic by the time final credits roll. It sports a bevy of charming, multi-dimensional supporting players, and a real rogue’s gallery full of fascinating scoundrels with complex and contrasting motivations. Still, in the space we have here, it’s better to discuss what Escaflowne executes conceptually than to recite its story beats. 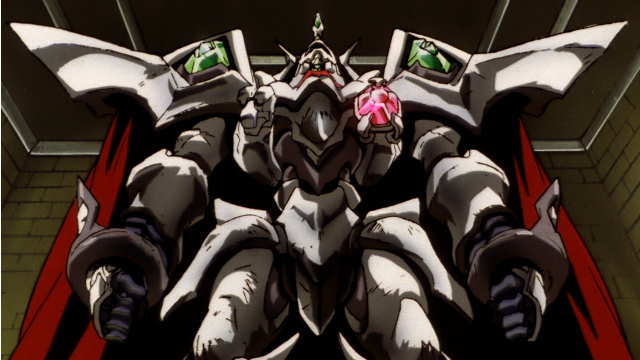 The show brought down walls for me, and broke plenty of genre barriers, too. Eastern. Western. Futuristic. Historical. All these clashing elements are artfully mashed together to create a true, unique fantasy world that feels just as fresh and striking as it did in ’98. Also, most anime shows are crafted with strict notions about which gender they’re intended for. Shonen shows are for boys, shojo shows are for girls, and that’s that. Escaflowne, however, intentionally defies these classifications, lavishing as much energy and artistry into bittersweet romances as kickass mech battles.

The cross-genre juxtapositions are best represented by the Guymelefs: uniquely medieval mech armors powered by dragon hearts. Prince Van’s white Guymelef, Escaflowne, is this world’s Excalibur (or Skywalker family lightsaber, if you prefer), and Hitomi holds the key to truly awakening it. There’s also some rich thematic subtext to Escaflowne‘s love triangle. Allen offers Hitomi her ideal vision of a chivalrous beau, while Van is the boyish barbarian, and her choice between the two demonstrates a clash of romantic fantasy ideals. 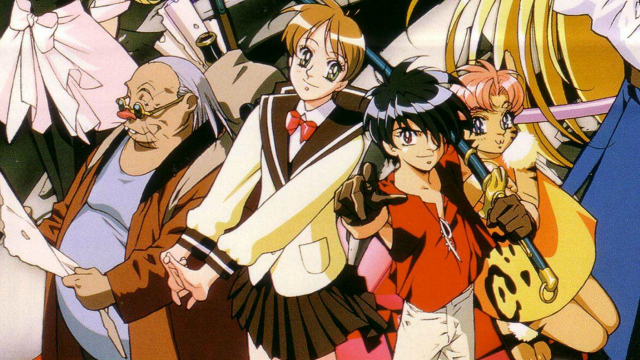 Having subsequently watched hundreds of other anime, I still look to Escaflowne as a textbook demonstration for how “world building” should be done. The first fpisode doesn’t drown the viewer in a front-heavy mumbo jumbo. The introductions of major characters and big ideas are paced properly, arriving only when they relate to the plot-at-hand (not when the writers are anxious to show off Gaea’s complexity).

Lastly, to keep the Star Wars comparison going, Yokko Kanno’s orchestral score is just as crucial to the experience as John Williams’ classic leitmotifs. Plenty of anime shows have memorable intro songs. Few drop orchestral themes every episode that you’ll be humming for years and afterward.

Oh, and a word to the wise. A feature film adaptation was released in 2000, and it isn’t recommend. The flick was made with the intent of distilling this 26 episode series into a more accessible hour-and-a-half feature, and it failed spectacularly. Plot points were rushed through, characters were dumbed-down, and nearly everything that was appealing about the show was omitted. Please don’t let that be your introduction to Escaflowne.

Does Escaflowne have a place in your heart, too? What was your first long-form anime, and would you recommend it to newbies? No need for promises–fill our comment section below!