Using the Hubble Space Telescope, Scientists at NASA and the European Space Agency (ESA) have imaged what the former agency refers to as a stellar wildfire. The phenomenon was observed taking place in the distant spiral galaxy, NGC 1614. The stellar wildfire is a consequence of a galactic merger between NGC 1614 and one of its smaller neighbors.

NASA recently released the stellar wildfire image to the public, noting that NGC 1614 is classified as a “peculiar” galaxy. This classification is due to the fact that NGC 1614 is colliding with its relatively gas-rich, low-mass companion galaxy. NASA refers to this collision as a “minor merger event” and says NGC 1614 is up to five times larger than its smashing companion.

“The interaction between the two galaxies is triggering a burst of star formation in NGC 1614,” NASA wrote in a press release for the image. The agency added that the collision has been the trigger for “one of the most extreme” observable nearby starbursts. 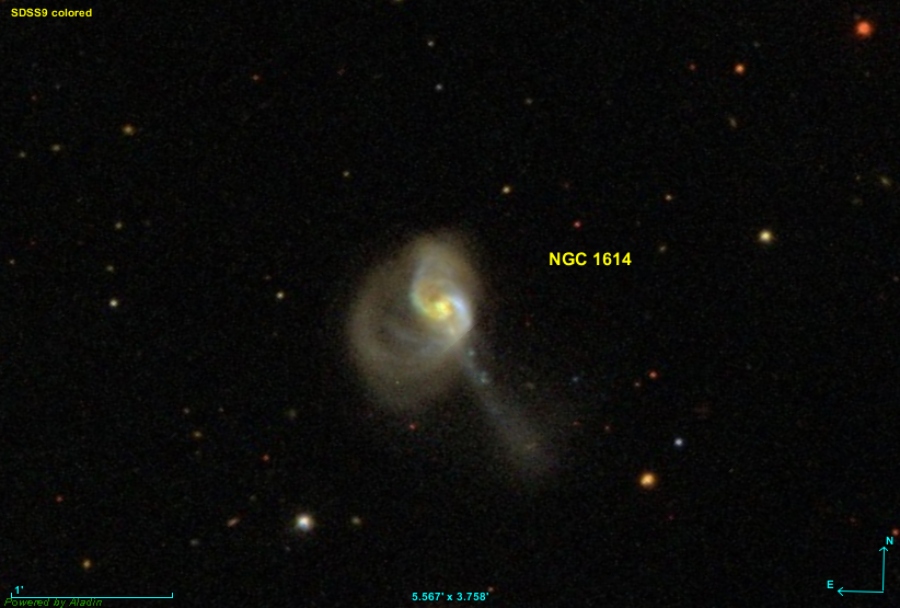 The starbursts occur when the cosmic collision between the galaxies drives a chaotic flow of interstellar gas away from the smaller partner into the larger one. The flow of turbulent gas subsequently moves into NGC 1614’s galactic nucleus; that is, the relatively bright region in the center of the galaxy where its own supermassive black hole resides. There, the massive increase in gas clouds leads to the compacting of matter via gravity, and, eventually, star birth.

NASA also notes that NGC 1614 is peculiar because of its so-called tidal tail. This elongated streak of interstellar gas and stars extends out into space and does indeed look like a tail. The image above, created by physics professor Donald Pelletier, provides another view of NGC 1614’s starry streak.

What do you think about Hubble’s image of this stellar wildfire? And what would you like to see Hubble focus its lens on next? Let us know your thoughts in the comments!