How to Build IRL TERMINATORS According to Expert Roboticist - Nerdist

How to Build IRL TERMINATORS According to Expert Roboticist

Even in the distant future, it would be mindbogglingly difficult for humans to build intelligent, self-healing, bipedal robots like the Rev-9 from Terminator: Dark Fate, the T-1000 from Terminator 2, or even the original T-800. As of today, state-of-the-art humanoid robots have enough trouble just dealing with sand. But despite the technological gulf between current-day robots and the ones from the Terminator films, it’s still possible to imagine, at least hypothetically, how they could be constructed one day.

Aaron Ames, Professor of Mechanical and Civil Engineering and Control and Dynamical Systems at the California Institute of Technology (Caltech), discussed the Terminator films with Nerdist recently, and described some of the key technologies that would be required to build something that could rival whatever Skynet plans on manufacturing in 2029 or Legion in 2042. (And yes, that means the T-800’s first birthday is only nine years away.) 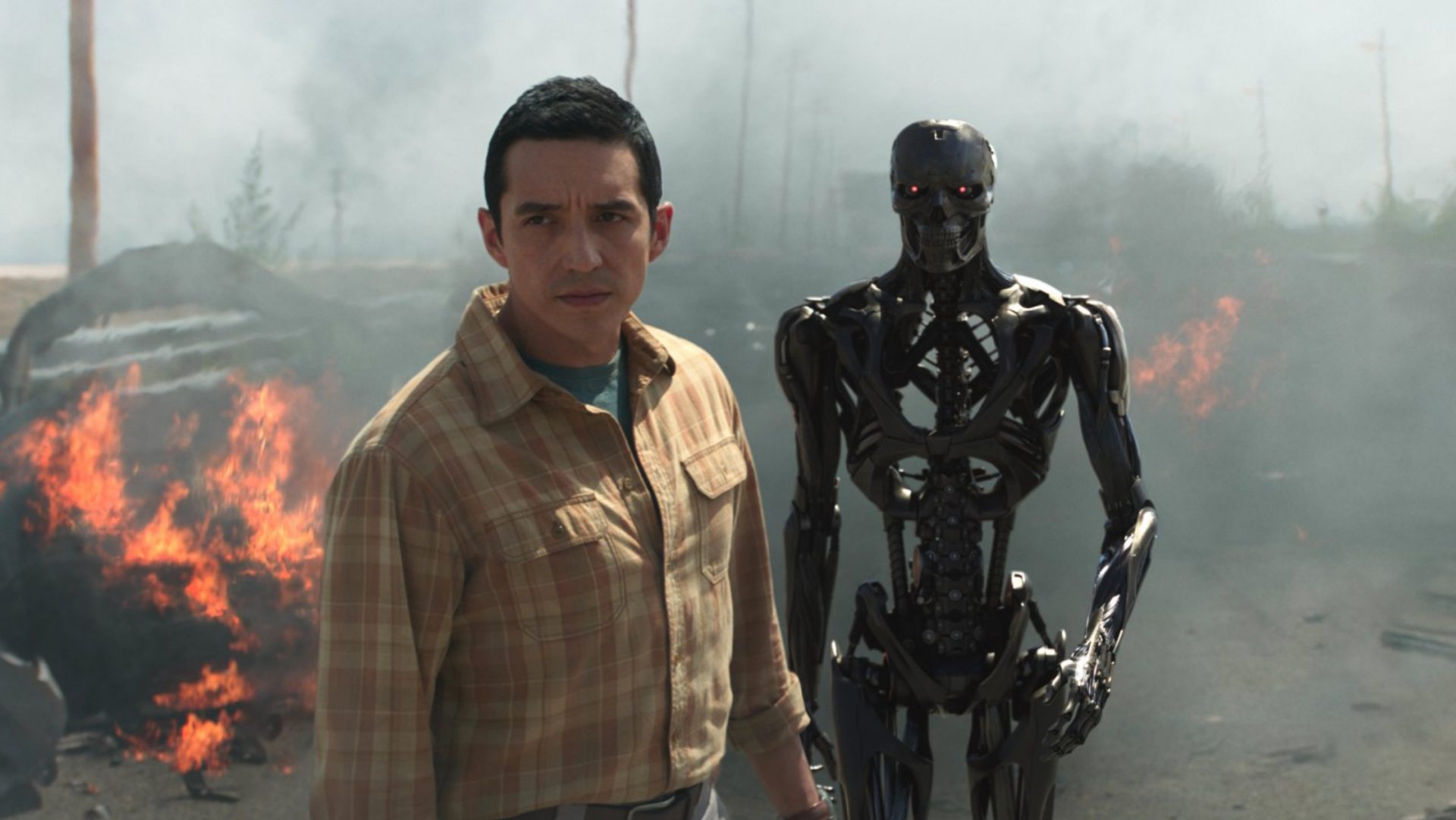 The Rev-9 split into its two component robots; one rigid, one “liquid.” Paramount Pictures

Ames, an avid sci-fi fan drawn to authors like Issac Asimov, and fictional universes like the one in Star Trek, said that when he reads science-fiction novels or watches science-fiction movies, he likes to focus on what’s possible rather than what’s impossible. The “seed ideas,” the fundamental, fictional scientific breakthroughs that inspire the crux of a sci-fi story’s plot, are what fascinate Ames most. Which is why it was so much fun to hear him speculate about how to build something akin to the bots in the Terminator lineup.

To build the Rev-9, for example, Dark Fate’s baddie that combines the endoskeleton of the T-800 and the liquid-metal structure of the T-1000 (in universe it’s technically referred to as a “mimetic polyalloy”), Ames said that engineers would need to create a system involving two robots that work seamlessly with each other; one of which would be made of “a bunch of really small nanobots working collaboratively [with each other] with independent power supplies and [computer] processing all on board.” These nanobots would have to effectively create a “decentralized computational platform,” meaning they’d all individually need to be functional computers, but also be able to work together as discrete parts of a larger, unified computer.

Above is an example of a robot swarm, which, if advanced enough and fine enough, could make up a Rev-9’s liquid-metal body. Note that this research is unrelated to that being conducted by Ames.

Powering the nanobots wouldn’t be easy though. According to Science Daily, robots on the nanoscale typically range in size from .1 to 10 micrometers—for reference, human head hairs generally range from 17 to 181 micrometers in thickness—which means that onboard batteries would have to be insanely tiny. And while ultra-tiny batteries are well within the realm of physical implementation (scientists have already created batteries only .15 micrometers wide), they’d still need some kind of continuous energy source to be recharged over and over again. And that’s where the Rev-9’s rigid endoskeleton would come into play. 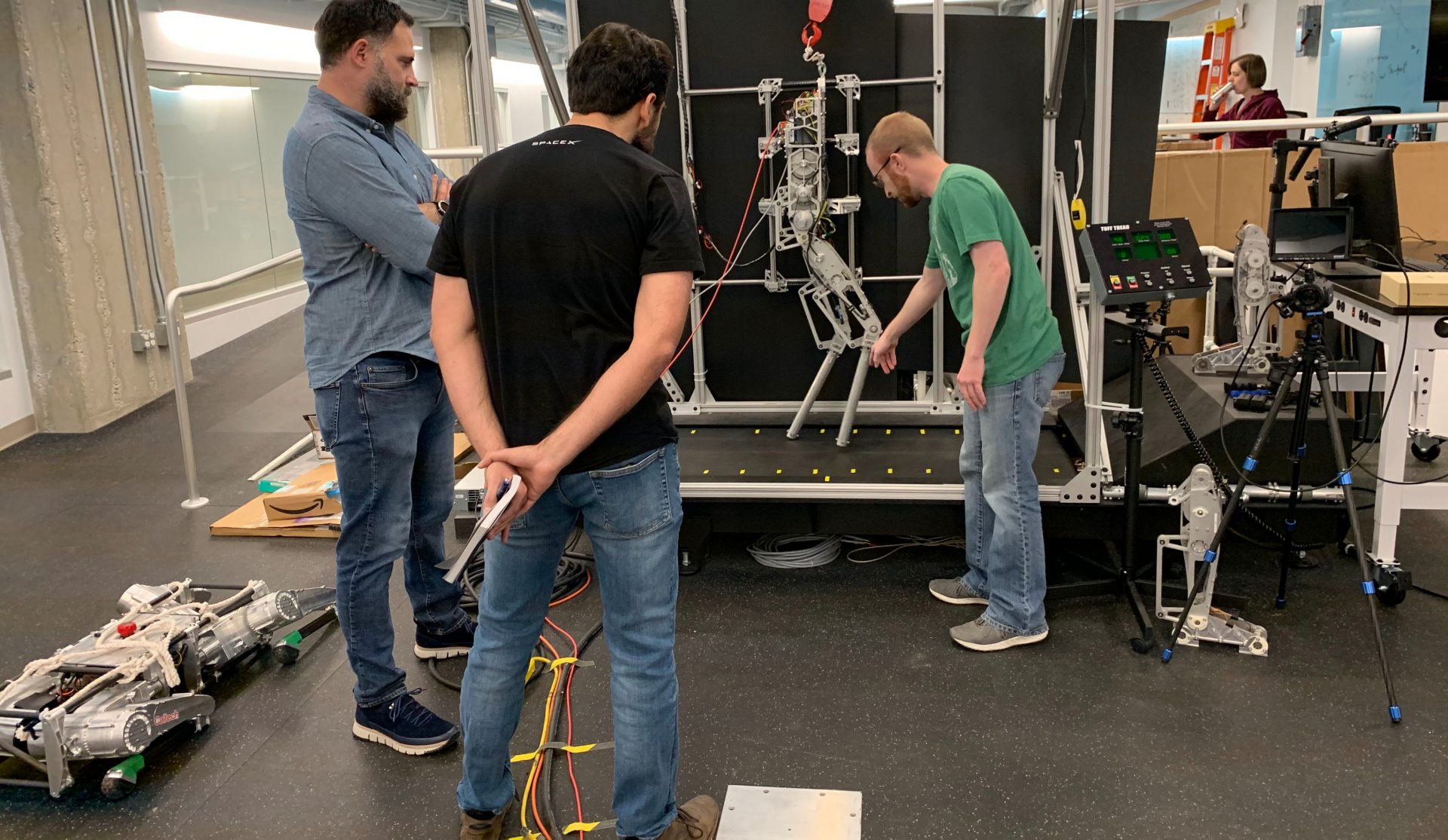 Professor Ames (left) and a member of his team (right) showing off their fourth-generation bipedal robot. Mac McLean

“A main rigid structure could have a power source,” Ames said as he described the hypothetical way a Rev-9 could be energized, “[and that could] wirelessly transmit the power to the smaller components.” This would mean the nanobots would only need roughly, say, an hour’s worth of onboard energy, and could easily be recharged by the endoskeleton’s power source. As far what could be used for the source itself, Ames said that something similar to the T-800’s nuclear power cells could hypothetically work.

Ames also said the endoskeleton could serve as a base for a centralized processor, where the Rev-9’s main computation could be handled. The centralized processor could then communicate via bluetooth with all of the nanobots, simultaneously instructing them to do whatever it wanted. E.g. reform a half-blown-off face, or grow into giant knife-arms perfect for stabbing people right through the torso.

In terms of the Terminators’ locomotion, it’s reasonable to think that engineers could build something like the T-800’s endoskeleton at some point in the next few decades; Ames didn’t give any specific predictions—decades is our guess—but he did say that “The form factor of the T-800 is [closest] to what we’re getting to” in terms of current robotics development. Atlas from Boston Dynamics seems like a decent proof-of-concept, although keep in mind that Atlas has zero ability to learn, makes constant mistakes, and is, apparently, almost always remotely controlled.

One of Ames’ team members remotely controlling their bipedal robot. (Note this is not Atlas.) Mac Mclean

Somewhat tangentially, Ames also discussed the “black box” problem with artificial intelligence (we brought it up, to be fair), which refers to the fact that when it comes to AI systems made up of neural networks, there’s always, for now, anyway, an unknown computational element that allows them to work. “There’s absolutely always things on these systems we do not understand,” Ames said in reference to the black box problem, adding that “there’s always this sort of [unidentifiable] component that comes together when you make something work.” Which means in order to create Terminators, engineers would not only need to perfect super-advanced nanobots, wireless nuclear power sources, and extremely robust locomotive endoskeletons, but also bank on a bit of what Ames referred to as “black magic” showing up in the builds.

Terminator: Dark Fate is available now digitally and on 4k UHD, Blu-ray, and DVD. The comments section below is also available now for your opinions on just how far off we are from building IRL Terminators!