How a Friendship Inspired A Project to Make RPGs More Accessible

We’re counting down the days  International Tabletop Day 2018, happening this year on April 28th! As we get closer to the big day, we’ll be looking at the gamut of tabletop gaming, from the stories of the games we play to remarkable people who love them. Be sure to join in on the fun on April 28th on our official  ITTD Twitch Stream, hosted by Ivan van Norman, and donate to  charity:water, the worthy cause we’re supporting this year.

Jack Berberette is a man on a mission to make tabletop role-playing available and accessible for visually impaired gamers. He started DOTS RPG, a project for making braille dice that have been meticulously designed and re-designed to best help players make those important rolls. And as incredible as that is, it’s just the beginning.

“DOTS was inspired by my late buddy, D,” Jack says. “D and I met about 9 years or so ago at a local gaming convention… Over the years, D and I became close friends. One day, last year, I called him up and asked him, ‘D, do you use audiobooks or something for your game books? How do you read the rules?'”

As a blind Game Master, D revealed to Jack that he simply had to trust his players to read the rules to him, as there were no accessibility-ready paper or digital copies of rulebooks (for any system) available. The dependency on finding sighted players to explain the rules is what motivated Jack to begin the DOTS RPG project. 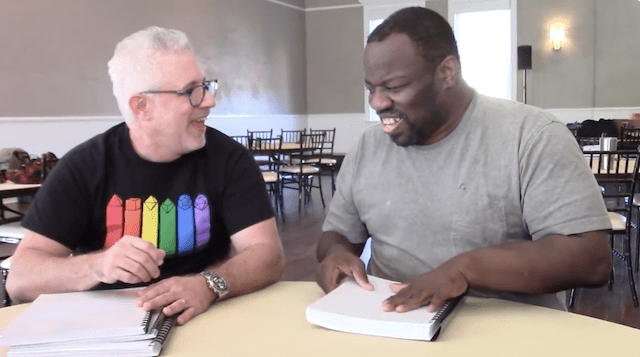 “I just believe that the industry, like me, had just not realized that the need was out there. If I hadn’t met D, I probably would have never considered accessible gaming products,” he says.

DOTS RPG isn’t intended to be simply a storefront for braille dice or other accessible gaming products, says Jack, but instead aims to raise awareness for the need for accessible gaming materials. “I believe that all players, regardless of social or accessibility needs should be offered whatever is needed so they can game with independence,” he says.

Jack first focused on making braille dice, depending heavily on input from blind gamers during the design process. “It’s one thing for a sighted person to assume what a blind player needs, it’s a completely different thing to incorporate input originating from that perspective.”

Braille is more like a code than a language, says Jack. “All braille characters are transcribed into braille cells. A series of braille cells makes up words, sentences, numbers, etc.,” he says. Numbers are actually created from the letters A through J.

While braille usually includes a number symbol to denote a numeral for the reader, the dice design does not, as the resulting dice would need to be very large to fit them, Jack says.

“Now what is important, however, is orientation, so the reader knows the orientation of the dots,” he explains. “So each die face has a textured edge to serve as the bottom point of reference for the braille cell. 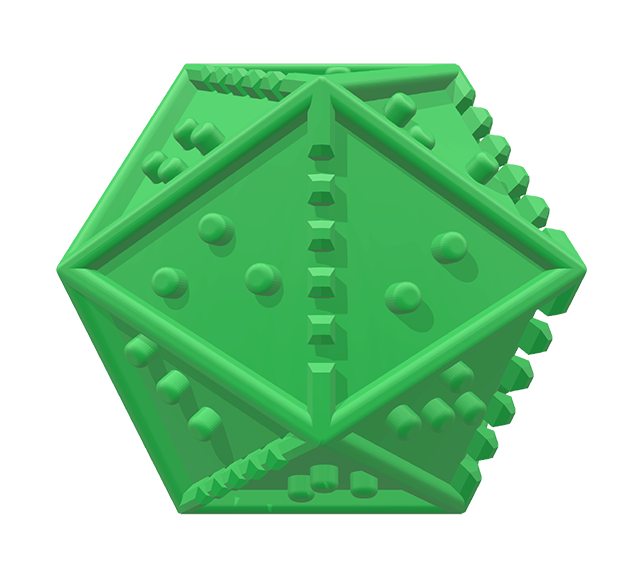 The design is on its third iteration to make them as accessible as possible. “We have just released the third iteration of the revamp based on feedback from visually impaired players, and also with the uber awesome suggestions by Jess Dempsey (my DOTS RPG Brain and Social Media person), and her boyfriend Joey Iovino, who came up with the idea for the latest version of the die face edging.”

Jack also credits the 3D designer he works with to make the incredible designs. “I want to give a special shout out to Sterling Pittman, the 3D model designer that takes all my crazy ideas and somehow creates fantastic 3D printer models. I could not do this without him.”

What’s Next for DOTS RPG

The printing costs for the dice with that design are still very expensive—-about $50 from Shapeways, although the dice models are free to download for anyone with a 3D printer—so Jack has created a new design to bring down costs.

“I am super excited to announce a brand new design called Lightning Braille Dice!” he says. “I came up with a 4 die set that can emulate any dice roll a normal polyhedral set can provide.

“The Braille Lightning Dice cost around $20 to have Shapeways print them, and should be a lot easier for people to print on normal 3D printers. These dice models are available for free download as well.”

Jack hopes to help players who are legally blind with his next project. “These dice will be much larger versions of the Braille Lightning Dice, but instead of braille dots, the dice will feature large, raised, tactile normal numbers,” he says.

“Additionally, the dice will feature high contrast colors to make the numbers more easily read. Now for a totally blind player, that may not know braille, these dice might provide a tactile number that could be read based on the shape of the number.”

How You Can Help

Jack is always grateful to receive help and support from the tabletop gaming community. You can sponsor a dice set, or print one and send it along if you have a 3D printer at home. “Simply print a set if you have the capability to do so, or purchase a set from the DOTS Dice Store on Shapeways and then just ship it to me,” he says. “Once I receive the dice, I’ll get them to someone on the waiting list.”

Jack and the DOTS RPG Project receive no markup or profit from the dice printing; they simply want to get the dice into as many hands as possible. 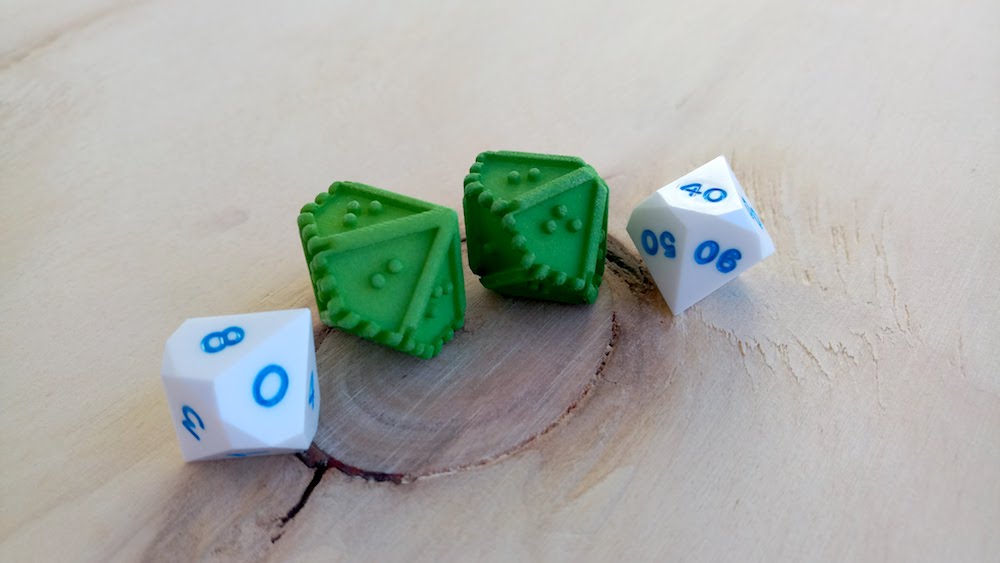 “The most important thing that people can do to help, however, is just realize that there is a huge need for accessible gaming materials,” he says. “If you are a game designer, know game industry people, reach out to them and let them know about the need and ask if they would be willing to make accessibility part of their game design process.”

In memory of D, the inspiration for this accessibility project.