The 1966 Batman television series starring Adam West and Burt Ward as the Dynamic Duo is something of a point of contention for longtime fans of DC’s Dark Knight. Many see it as the moment that almost destroyed the Batman character and reduced him to a joke for all time. The popular consensus holds that if the late, great comic book writer Denny O’Neil hadn’t reverted to Bill Finger and Bob Kane’s original urban vigilante version of the character in the wake of the show’s cancelation in 1968, we might not even have a Batman now.

But the truth is more complicated than that. Yes, O’Neil’s direction restored Batman to his original creator’s intent, and ultimately led to his becoming far more popular than the ‘60s “Batmania” fad would have ever suggested. But the fact is, the Batman ’66 television series not only saved Batman from looming obscurity, it was responsible for turning him into a global icon in the first place.

It may be hard to imagine for the modern fan, but for their first three decades of publication, Superman was far more popular than Batman. The Man of Steel had a national radio show, a newspaper comic book strip, movie serials, and an extremely popular television series in the ’50s. In 1965, even your grandma would have known who Superman was. Batman, meanwhile, was still DC’s second biggest hero for sure. However, only folks who grew up reading comics know who he was. Thanks to the TV series, that all changed forever. Batman became a household name only due to the truly massive success of the show. But while television played Superman straight and delighted adult audiences without the camp factor, it definitely did not do the same with Batman. So why the difference in approach?

How Batman Comics Became Something to Be Mocked 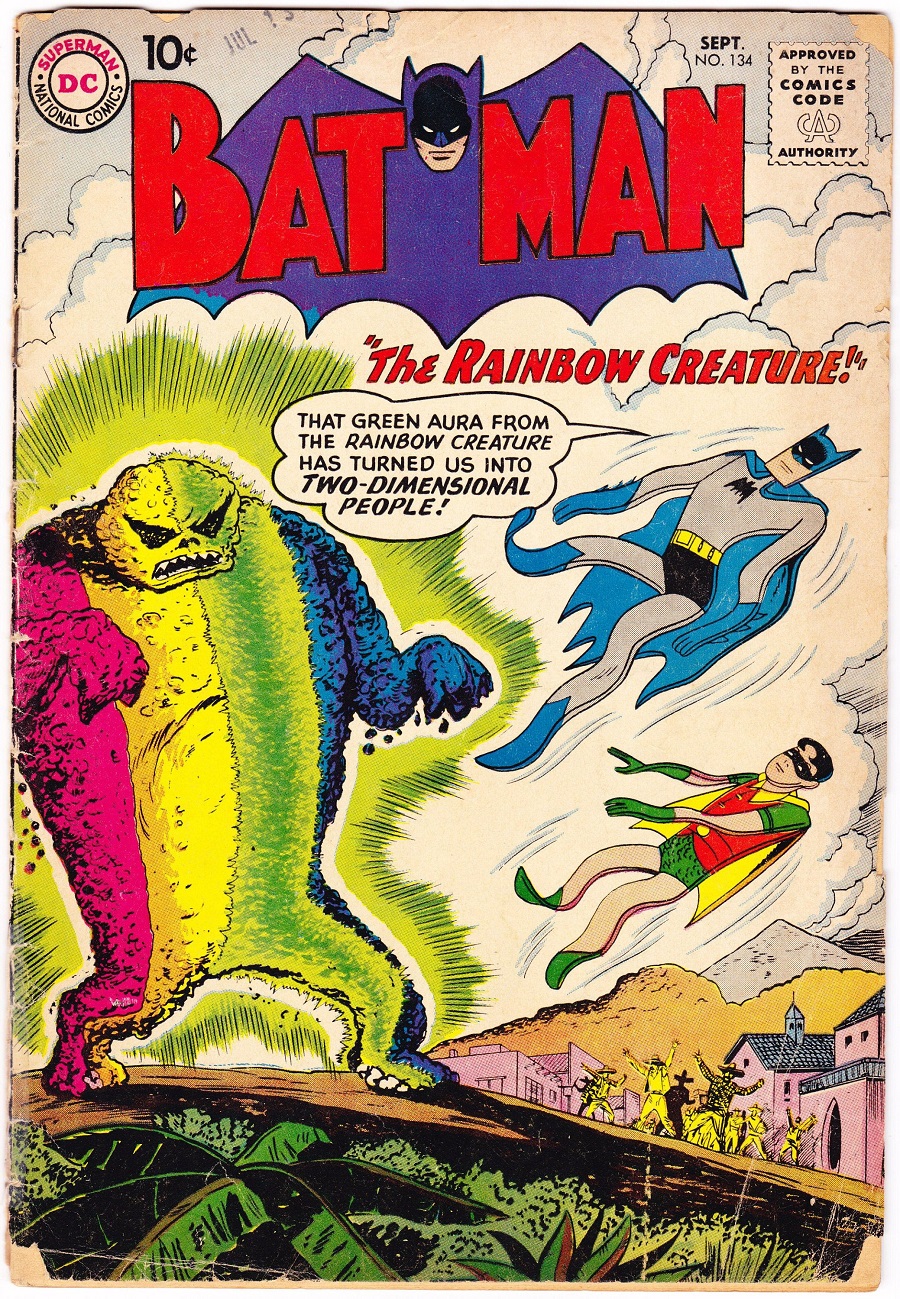 Batman ’66 executive producer William Dozier was not a comics fan at all growing up, having simply been too old to start reading comic books in their Golden Age heyday. So when ABC approached him about making a TV series based on the character, he thought it impossible to do with a straight face. Given a stack of Batman comics from the past several years, he found the entire thing only worthy of mockery. And to be fair to him, for well over a decade, the comics were extremely silly and geared towards young kids only. It’s highly doubtful that he read any stories from say, 1939 or the early ’40s.

So how did Batman go from grim to goofy? You can blame one man’s book. Nothing did more damage to comics than a book called Seduction of the Innocent. Written by pop psychiatrist Frederic Wertham, the good doctor posited that comic books were corrupting the minds of impressionable American youth with lurid impulses. Batman and Robin were major targets of his, as he suggested that the pair were living out “a wish dream of two homosexuals living together,” enticing young men into the love that dare not speak its name. The book caused a sensation in the United States, and sales of comic books plummeted by a staggering number. 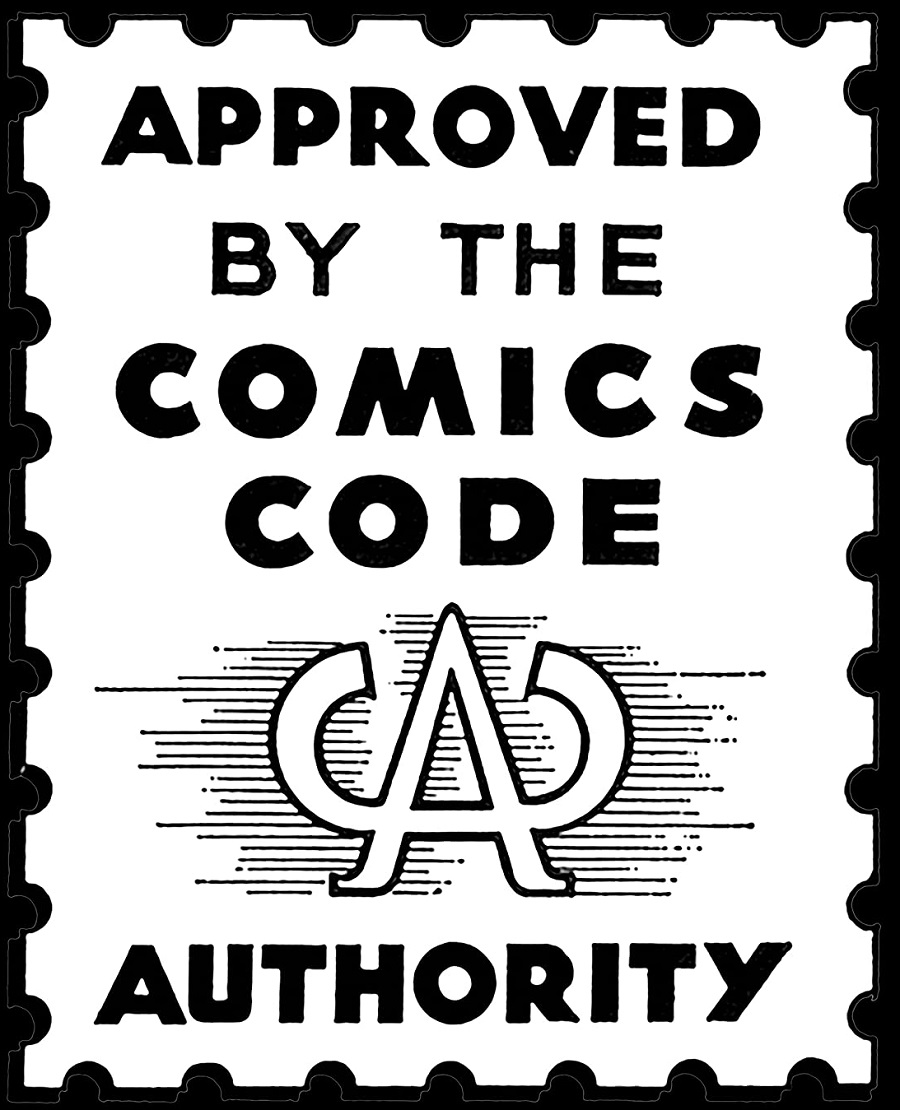 The comics industry remedied its near-death by creating the Comics Code Authority, a self-policing body that would make sure comics were perfectly wholesome for America’s kids. The result: Batman became very lighthearted and silly; the Dynamic Duo suddenly began having sci-fi oriented adventures instead of stopping bizarre gangsters in Gotham City. Their classic Golden Age villains all but vanished, replaced with aliens and mad scientists. Only the Joker got to stick around, if only because it’s easy enough to turn a homicidal clown into a harmless prankster. But even the Clown Prince of Crime took a backseat to imps from other dimensions and deadly space rays.

The Return of the Classic Rogues’ Gallery 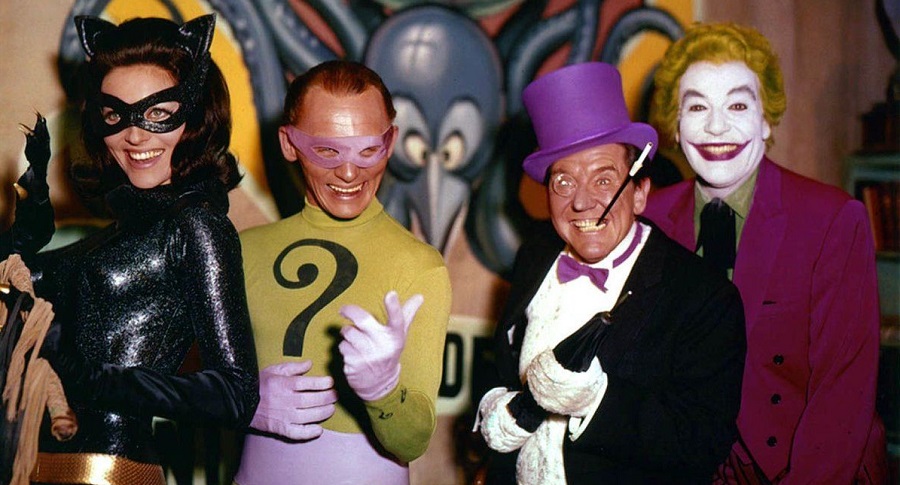 By this point, the deranged criminals that Batman fought on a regular basis in the comics in the ’40s and early ’50s had mostly gone away. But for the TV series, the producers resurrected most of them. Season one of the show prominently featured the Joker, Penguin, Riddler, and Catwoman as the main baddies. (One notable exception was Two-Face, who was considered too gruesome for TV.) Because of the series, these characters were restored in prominence in the comics as well, and they never got sidelined again. On top of that, several of the classic rogues would get permanent changes as a result of their TV fame. 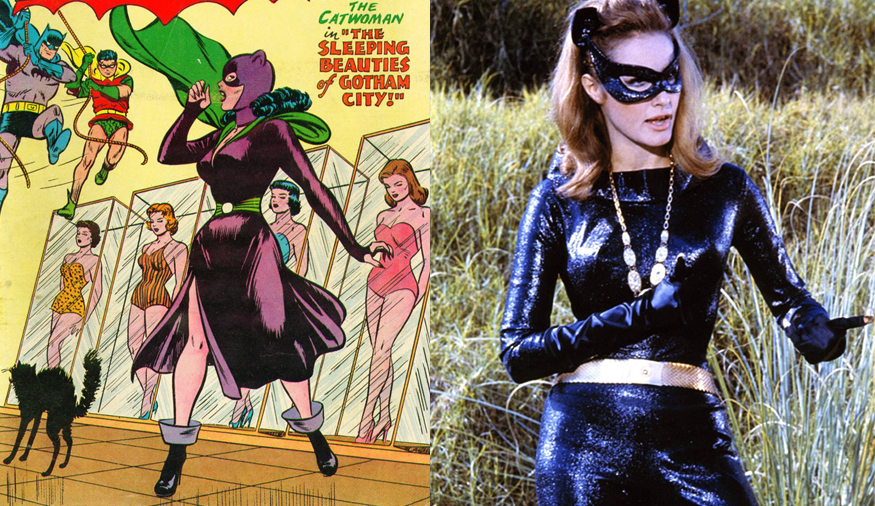 Due to the Comics Code Authority, the feline femme fatale Catwoman had been banned from the pages of the comics for 12 years, her last appearance prior to the hiatus having taken place in 1954. Because of the code, female characters could only be portrayed as wholesome, like a mom on a TV sitcom. So Catwoman had to go. But with her iconic portrayal by Julie Newmar (also Lee Meriwether and Eartha Kitt), the character became too popular to ignore, and made a welcome return to the comics. In the TV series, Catwoman traded in her purple dress and cape for skintight catsuit, and eventually the comics would follow suit. Selina Kyle’s costumes would vary over the years, but the influence of her TV look would continue. 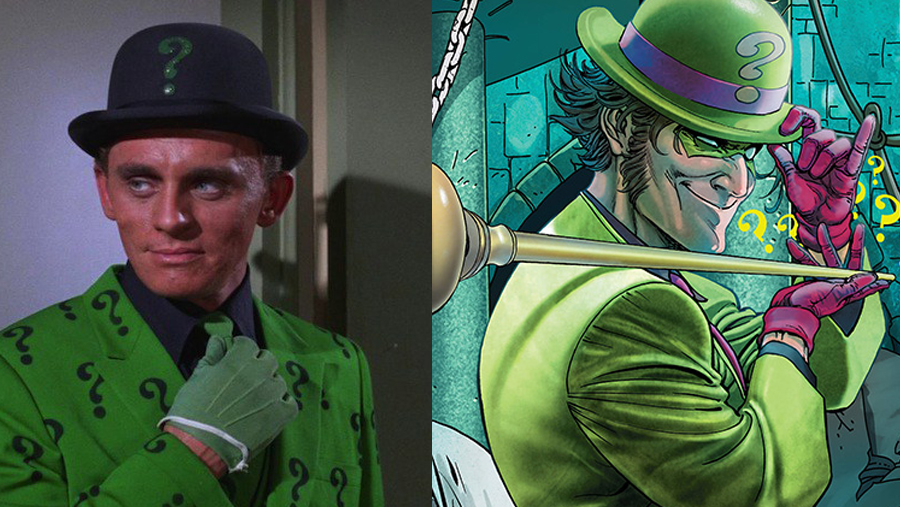 The Riddler was another classic rogues’ gallery villain who got a major boost from the TV series. In the ‘40s, he only made two comic book appearances, and then vanished from the pages of DC for a whopping 16 years. But when Batman comics started to drop the sci-fi excess of the ‘50s in favor of a new direction, Riddler was brought back. His return in Batman #171 was used as the blueprint for the show’s very first episode, and Riddler was considered an A-list Batman baddie from that point forward. Although actor Frank Gorshin wore his comics-accurate leotard costume on the series, he was said to have hated it. He therefore requested a green suit and tie costume, which also eventually made its way to the comics and remains the standard. 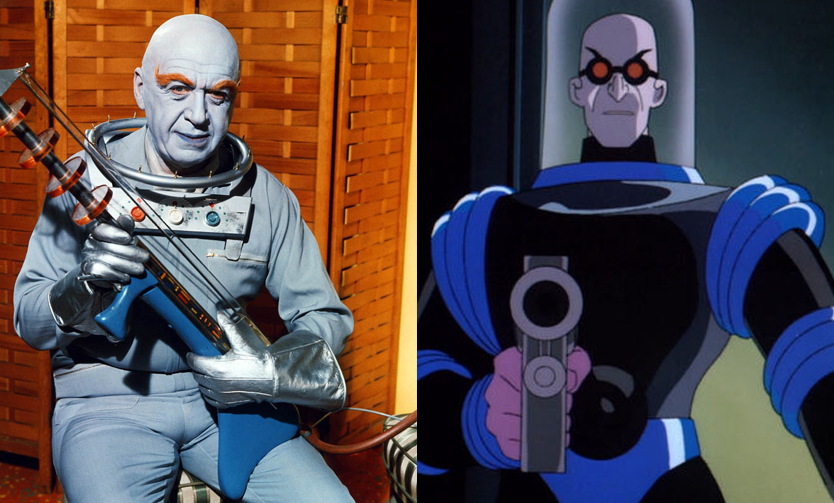 One more iconic Gotham rogue who owes his longevity to the series: Mr. Freeze. The ice-powered criminal first appeared in 1959, under the name Mr. Zero. He was essentially a one-off gimmick villain, but the TV series put him to great use under the new (and better) name of Mr. Freeze. It was only after several appearances on the show that his comic book career really took off. Eventually, he was used in the Batman: The Animated Series to great effect, which gave him new depth and character. If Batman ’66 hadn’t seen gold in this little-known character, it’s likely he would have stayed a footnote in Batman’s history. 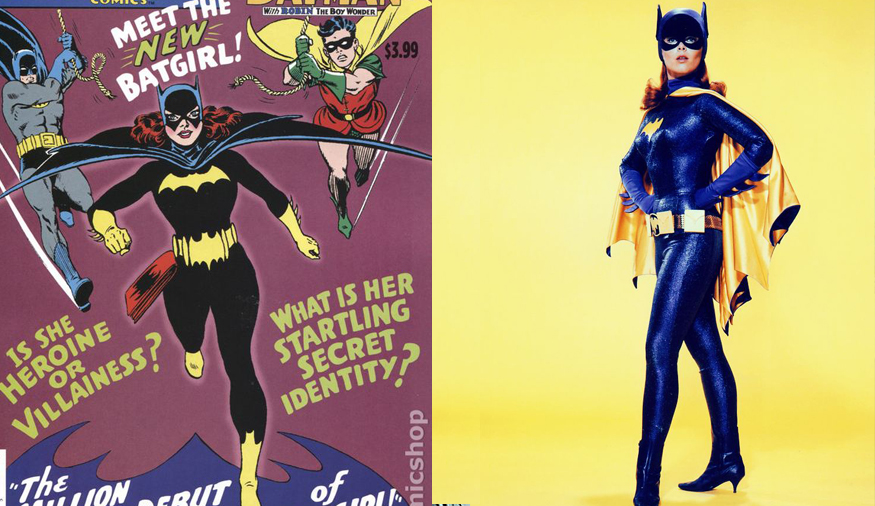 But no addition created for the Batman TV series has had a bigger impact than Batgirl, a.k.a. Barbara Gordon. Technically, Batgirl debuted in the pages of the comics first. But the editors at DC knew that the producers of the show wanted a new female character to showcase on the series, so they created Barbara Gordon, a young librarian and the daughter of Commissioner Gordon.

Batgirl made her debut months in advance of the TV version, but she was definitely created with TV in mind. Batman comics editor Julius Schwartz claimed that when creating the new Batgirl, it was his plan that she could be folded into the then-running TV series. When producer William Dozier saw early concept art during a visit to DC offices, he optioned the character in a bid to help sell a third season to ABC. Batgirl was a centerpiece for season three, but she ultimately outlasted her original campy incarnation played by Yvonne Craig and become a DCU mainstay. 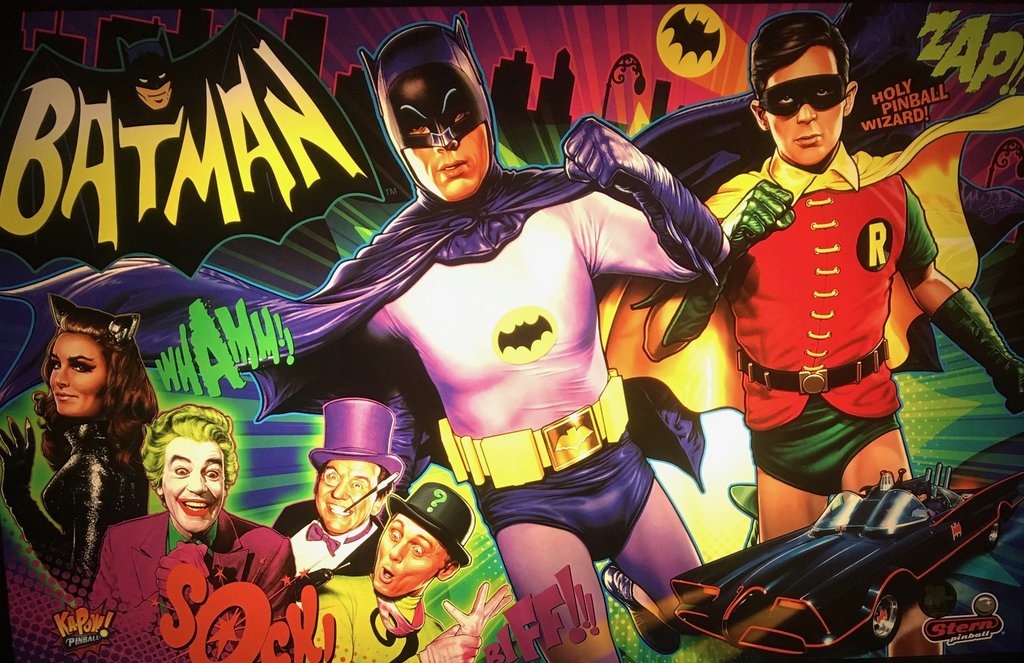 When DC Comics allowed Batman to become a shadow of his former self during the ’50s and early ‘60s, they were pretty much asking for the character to get spoofed on a grand scale. The Batman ’66 series was able to mock the character because at the time, the comics were goofy. Being resentful of Batman’66 spoofing the character is ultimately as pointless as being mad that Mel Brooks’ Young Frankenstein mocks the original Mary Shelley novel. The good parody shouldn’t ruin the original concept.

Ultimately, everything unfolded for Batman as it should, and one thing could not have happened without the other. If that parody TV series had not happened, Batman wouldn’t have become the cultural juggernaut he is. And if Batmania hadn’t ultimately flamed out as fast as it did, then DC wouldn’t have been forced to go hard in the other direction as a reaction, and Batman might not be their biggest character today as a result. Even if the Batman you love is the darkest, grittiest version of the character, he owes his current existence to Adam West’s lighthearted portrayal, and the phenomenon it created.