The provocative and potentially scandalous Privacy from USAopoly is an adult party game of loud and boisterous fun, with a no-secrets-barred attitude and easy-to-learn set of rules. With questions like “Do you sleep in the buff?” and “Do any of your exes have incriminating photos or videos of you?” your game night will never be the same after Privacy.

In Privacy you score points by guessing the exact number of players who answered yes to the current question. Do so and earn two points. If you’re within one of the correct answer you’ll receive one point, otherwise, you get zero. The first player to 20 points wins.

To start a game round, draw the top card from the deck. The number shown on the new top card indicates which question you’ll read out loud from the drawn card.

Players choose a yes or no chip from their secret stash of answer chips and place them into the ballot box. After everyone’s chips are in, each player will guess how many players answered yes to the question. They’ll adjust their voting dials to their number and place the dial face-down. 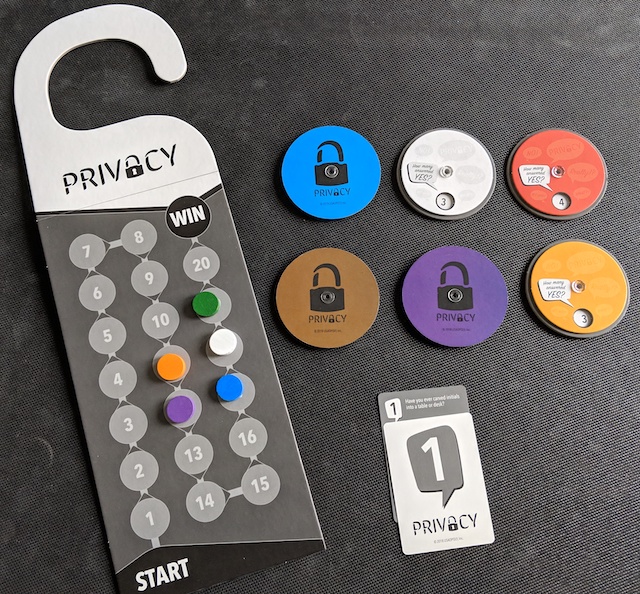 Privacy is not for the shy or wallflower type of crowd. You’re going to be asked personal questions, with many of them being sexual in nature. Of course, you’re secretly answering yes or no, but it’s good to be aware of what you’re getting into before joining a game. Questions like “Do you think there is life on other planets?” and “Have you ever been nude in a hot tub with strangers?” are two of the tamer examples from the game.

For those worried that their answers will be deduced by their fellow players, there are two variants to allow for more privacy and less possibility for people to figure out who answered what. First, if there is exactly one yes answer from the ballot box, only those who guessed one or two are required to reveal their dials. This way, anyone who answered zero doesn’t have to show their dial, thus implying they answered no.

It’s this provocative and risque spirit that will spark loud laughter and conversation late into your game night. If you’ve ever wondered if any of your friends have had sex at work or if they’ve ever picked food out of the trash and eaten it, then Privacy will get those answers out of them. Watch the game played on this episode of Game the Game:

What are your favorite party games? Tell us in the comments!