H.G. Wells is one of the most iconic names in literature. The English writer lived from 1866 to 1946, and wrote science fiction novels that have stood the test of time. He’s the man behind titles like The War of the Worlds, The Time Machine, The Invisible Man, and The Island of Doctor Moreau, to name a few. We continue to adapt his works for the big and small screen to this day. To put it simply, he changed the landscape of fiction forever. In fact, writer Brian Aldiss once referred to him as “the Shakespeare of science fiction.”

So it’s only right that the UK’s Royal Mint would someday issue a commemorative coin in honor of H.G. Wells. And that time has come. To mark the 75th anniversary of the author’s passing, Royal Mint issued a £2 coin featuring iconography from his famous works. Unfortunately, as many have pointed out on social media and in the press, the coin features a host of errors. The biggest one being the depiction of the tripods from Wells’ The War of the Worlds. As you’ll notice in the image below, the Royal Mint coin features an alien robot with four legs instead of three. 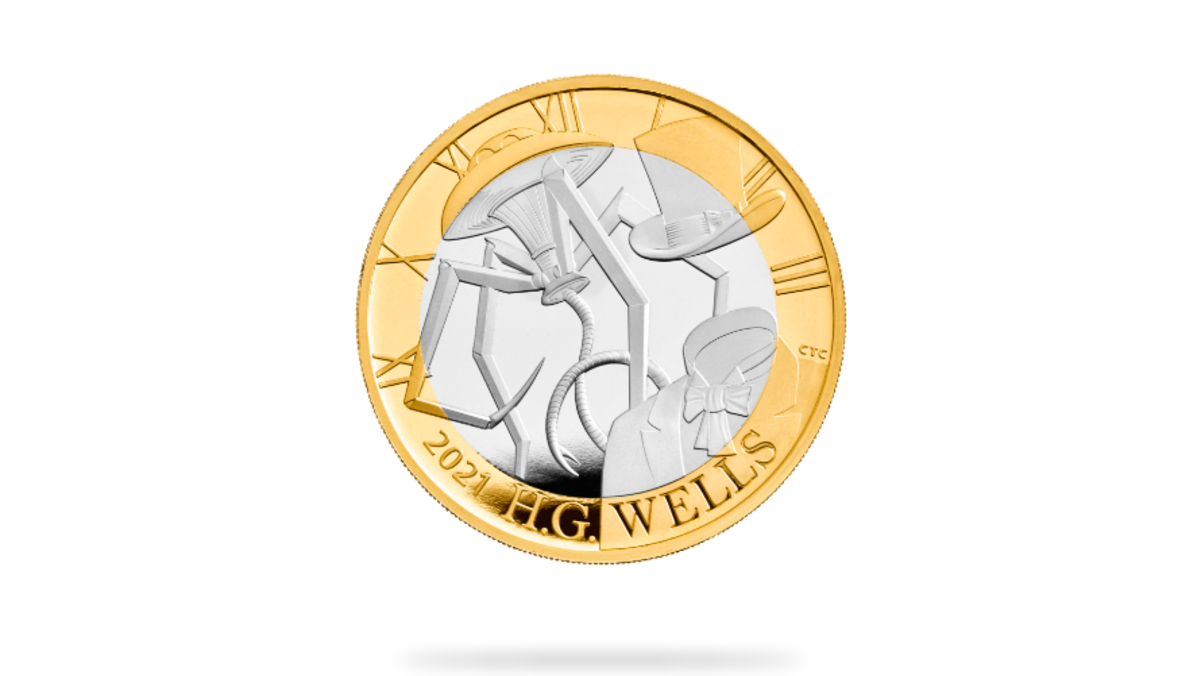 In The War of the Worlds, Martians attack Earth using mechanized tripods. And, as we all know, tripods have three legs. Hence the whole “tri” part of the word. This is a pretty egregious error. The artist who depicted the imagery for the Royal Mint, Chris Costello, said of his work: “The final design combines multiple stories into one stylized and unified composition that is emblematic of all of H.G. Well’s work and fits the unique canvas of a coin.” We guess “stylized” is one word for “completely incorrect.”

The tripod thing isn’t the only issue with the coin, either. As writer Adam Roberts pointed out on Twitter, the use of a top hat for The Invisible Man is also wrong. In the novel, the eponymous invisible guy wears a “wide-brimmed hat” with bandages over his face.

Several people have tweeted this into my timeline, so I might add: not only did Wells' Tripods have *three* legs, Griffin, his invisible man, does not wear a top hat (he arrives at Iping, face bandaged under a "wide-brimmed hat"). So it's two for two. https://t.co/3HhuhWHd1Z

This particular error is slightly less notable than the tripod thing, but still kind of interesting. The tripods and invisible man as they’re described in H.G. Wells’ text are some of the most iconic images in all of literature. We get wanting to offer up a stylistic impression of the author’s writing, but when there’s a legitimate fact error involved, it’s sort of unforgivable.

According to The Guardian, the Royal Mint had this to say about the errors: “We have created a new £2 coin to celebrate the life and works of H.G. Wells. The coin depicts scenes from famous works such as War of the Worlds and the Invisible Man as imagined by designer Chris Costello.”

That doesn’t exactly clear anything up, but at least they’re aware of the complaints. Too bad they’re already immortalized.

TAGGED: money, H.G. Wells, The Invisible Man, The War of the Worlds, The Royal Mint