If you’ve ever wondered what the inside of Godzilla looks like, a new theme park attraction in Japan is giving you the chance to find out firsthand! Nijigen no Mori, a theme park located on an island close to Kobe, Japan, is opening a new Godzilla themed attraction this weekend. It’s the only place on Earth you can jump feet first into a life-sized Godzilla’s toothy mouth… and come out the other end in one piece. (Don’t think about that part too much.) 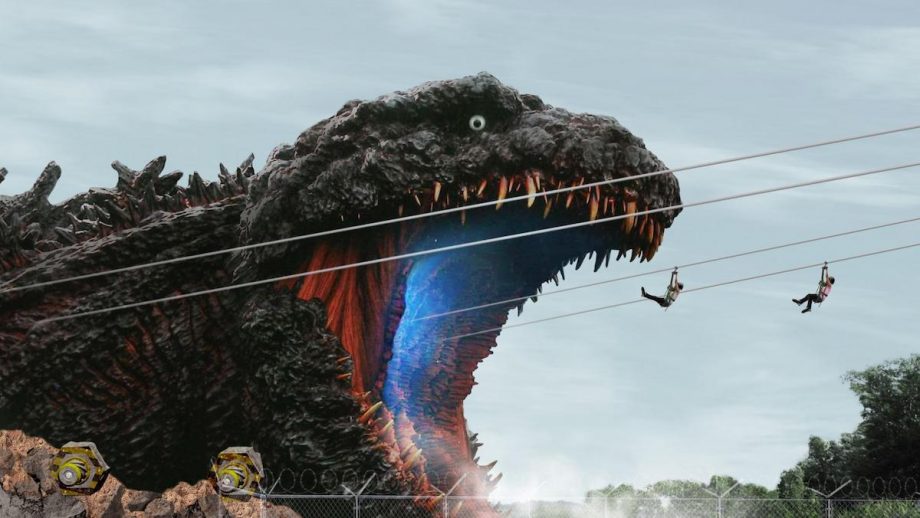 Nijigen no Mori on Awaji Island is a theme park already home to one-of-a-kind attractions like a colorful village based on beloved anime Naruto and Boruto. On October 10, the newest attraction, “Godzilla Interception Operation Awaji,” opens its doors to kaiju fans everywhere. Attendees take on the roles of researchers and embark on a journey to learn more about the invading creature. It culminates in staring down a 75-foot-tall Godzilla replica at the other end of a death-defying zipline ride.

Like all good theme park rides, the attraction begins with an in-universe movie that informs the public that the kaiju invasion has started. From there, visitors can check out a kaiju museum and shooting gallery game before moving on to the half-buried beast. A very excited and slightly nervous reporter for Sun TV had the chance to film his flight into Godzilla’s mouth.

And a theme park wouldn’t be complete without an appropriately themed menu! We can’t get over the Mothra Curry and the Godzilla Cream Puff.

Tickets for adults are ¥3,800 and kids are ¥2,200, and just those menu items are worth the price of admission. The next time you’re planning a trip to Japan, take some time to visit this slightly out-of-the-way island to live out your dreams of becoming a ninja and fighting Godzilla.