What Is Sarah Paulson Really Up to in GLASS? - Nerdist

What Is Sarah Paulson Really Up to in GLASS?

We’ve seen enough M. Night Shyamalan movies to know not to trust anyone or anything, so we’ve been highly skeptical of Sarah Paulson‘s psychiatrist Dr. Ellie Staple from the very first trailer for Glass. Is she really just a doctor treating patients with a “particular type of delusion of grandeur” in the “growing field” of people “who believe they are superheroes,”Â or does she have far more nefarious motives for her work? The film’s latest teaser feels like Staple’s most sinister yet, and we’re not sure what she’s up to. Does she wants to destroy her special patients, or harness their powers? And which would be more dangerous?

This new teaser starts with Dr. Staple saying to Bruce Willis’ David Dunn, “I’ll tell you a secret: I want to believe in real life superheroes,” the same way she says all kids do. She also tells Samuel L. Jackson’s Elijah Glass, “Convince me” when he tells her super people exist. But though she says she wants to believe these people to be real, she later in the trailer says, “We are not meant to have this much power.” That could be a case of “careful what you wish for,” because once she sees what Kevin and Glass are capable of she’ll realize super powers are super deadly.However, considering what we’ve seen from her already, and one of the franchise’s most important ideas, it’s hard to trust her sincerity. In the second trailer she uses flashing lights to provoke different personalities in Kevin, almost like she has figured out how to access them. Each flash unlocks another personality, of which “The Beast is one.” That might not seem so nefarious if not for the first two movies. Elijah Glass was motivated in Unbreakable to find his opposite, a super man who was everything he and his broken bones were not. It’s a theme that was also explored in Split, where the limits of Kevin’s split personality disorder finally burst forth in unimaginable ways. Unlocking and finding super powers is what these movies have been about.

If you dedicate yourself to dealing with people who think they are real-life comic book figures, all while secretly hoping they will be, you aren’t looking to disprove their existence, you are trying to confirm it. That raises the obvious question of “why?” If you are secretly working to find an amazing new power by lying about your true intentions, you probably aren’t doing it for benevolent reasons.So if her motives are malicious, what is the “effective treatment for this disorder” she developed really designed to do? Does Dr. Staple want to destroy her patients because no person is “meant to have this much power?” If that’s her ultimate goal, the elimination of superheroes and supervillains, it could force David Dunn to join with Glass and The Beast to survive.We trust David to stay true to himself, but he can’t help people if he’s drained of his powers… or dead. What kind of danger would those three combined forces pose? What would it mean for the whole world to learn they are very real? What kind of Pandora’s Box of other super people would that open? 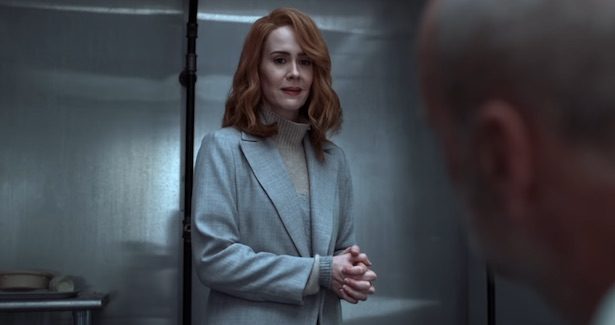 That might not be the worst scenario, though. What if Dr. Staple has been looking for superheroes for a very different kind of reason? What if instead of seeking their destruction, she sees potential to harness and control them? Some kids read comic books and identify with the bad guysâ€”what if Ellie Staple sees herself as the one who can unite them and lead them?Sarah Paulson might not be playing a doctor trying to “cure” her patientsâ€”she might be the franchise’s new supervillain. The best superheroes all have them.What do you think? What are Dr. Ellie Staple’s true motivations: concerned doctor or secret villain? Tell us your best theory in the comments below.