Gialli, or Italian mystery-thrillers, have long been a curiosity of mine, but in the past year they’ve become an outright obsession. Born out of a German subgenre called krimi (crime), the giallo (Italian for yellow, named for the color of the covers of a specific publisher’s thriller novels) films were all stylish and sexy and often terrifying.

One of their other main traits was confusion. The plots of these movies are often very hard to follow, and occasionally make absolutely no sense at all.

Though the cycle dates back to 1963’s Evil Eye directed by Mario Bava, it wasn’t until Dario Argento’s 1970 masterpiece The Bird with the Crystal Plumage that the giallo boom began. Hundreds more of these Italian thrillers were made between 1970 and 1973, with a precipitous drop-off thereafter. Crystal Plumage is an exceedingly convoluted detective story about a witness to an attempted murder who’s plagued by a nagging feeling he’s missed a vital piece of evidence, if he could only just remember it. This became the basic template for quite a lot of giallo of the era, usually focusing on a male protagonist dabbling in detective work while a killer clad in black stalks and slashes across the city.

It’s a simple set-up that gave us some of the best Italian genre films of the decade. Once you get past Bava and Argento–the undisputed maestros of Italian horror–you actually get into some pretty interesting films with their own sense of style and often-bananas storylines. My favorite director is Sergio Martino, who made five gialli right in a row between 1971 and 1973, all of which embody the genre’s globetrotting, high-rolling style as well as its penchant for graphic violence, deep pathos, and themes of sexual repression.

Gotta love a detective story where the detective solves absolutely nothing.

Though the films often share the same principle casts, rotating in and out depending on the story’s needs, one thing all five of Martino’s early-’70s gialli have in common is screenwriter Ernesto Gastaldi. Gastaldi was a veteran of Italy’s film industry, and had written an astonishing 71 films between 1960 and 1970 before he wrote Martino’s first giallo, 1971’s The Strange Vice of Mrs. Wardh. Mrs. Wardh concerned a beautiful but fragile woman (played by genre staple Edwige Fenech) who is the heir to a massive retailing fortune. Someone is killing people in Vienna and it seems Julie Wardh is next. But who would want to kill her? Her husband? Her former lover with whom she had a violent S&M relationship? Or her new boyfriend George? Whoever it is, Julie loses her mind thinking about it.

Mrs. Wardh was full of the kind of twists you only ever get in Italian thrillers of this era. Motivations are based almost solely on how dramatic the reveal would be. The Strange Vice of Mrs. Wardh embodies the female-centric giallo which almost always portrayed mentally anguished women with deep sexual hangups or a sordid pasts who often sees psychiatrists while the murders are happening. Three more of Martino and Gastaldi’s gialli would be of this ilk (All the Colors of the Dark (1972), Your Vice is a Locked Room and Only I Have the Key (1972), and Torso (1973)).

But I think the film that most embodies the convoluted and confusing plot of these movies is Martino’s follow-up to Mrs. Wardh, 1971’s The Case of the Scorpion’s Tale. It’s a story that pulls the rug out from its audience a few times in its 95 minutes and keeps shifting who the protagonist is. It’s also the most like a conventional mystery story, which makes its strangeness all the more pronounced.

A rich Englishwoman named Lisa Baumer (Ida Galli) is having an affair with a younger man. Fortunately for her, her husband is aboard a plane that suddenly explodes in midair. Now she’s the beneficiary of a million dollar insurance policy, and insurance investigator Peter Lynch (George Hilton) is put on the case, and suspects Lisa of plotting her husband’s death. She gets the insurance money in cash, but is slashed to death in Greece before she can abscond with her boyfriend.

This puts Lynch in a precarious position, as he was the last person to see Lisa alive, however he’s fairly certain Greek socialite Lara Florakis (Janine Reynaud) had something to do with it, and he’ll need the help of the beautiful investigative reporter Cléo Dupont (Anita Strindberg) to clear his name and get to the bottom of who’s brutally murdering anyone even remotely involved in the inheritance. 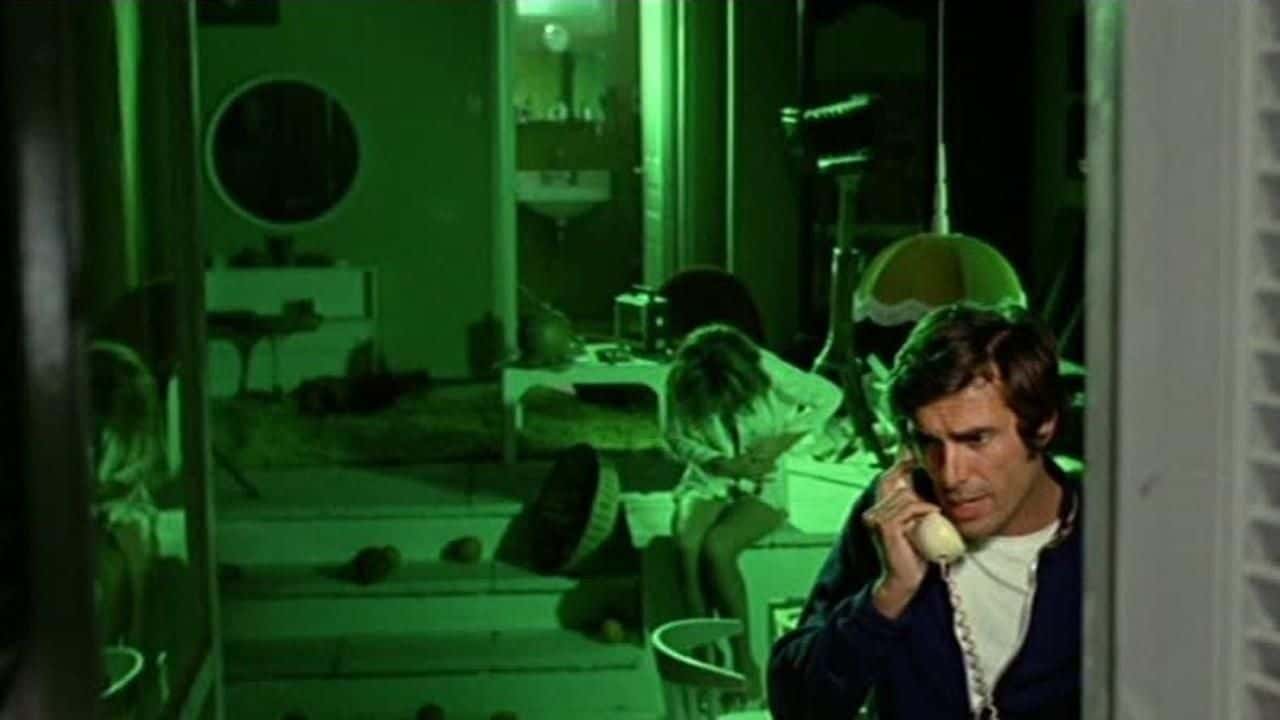 Like Psycho did 11 years earlier, Scorpion’s Tail  focuses on a particular protagonist for the first act of the movie before she becomes a murder victim and we change to another character. Unlike that movie, though–or Scream later on for that matter–Lisa Baumer isn’t played by a huge star; Ida Galli was a recognizable figure in Euro cinema but Sophia Loren she was not. We also don’t get to know too much about Lisa, at least not through dialogue. She’s the movie’s first red herring. We know she’s somehow involved in the plot, because it’s her husband and her insurance money, but none of the puzzle pieces start falling into place until after her death.

Gastaldi and Martino have much more complicated things in mind, not the least of which is that there are actually multiple murderers, and multiple people who think someone else is out to get them. Peter’s attacked by someone, probably working for Lara; Lara is menaced by someone clearly not working for her; the police are pretty sure it’s Peter himself, but then he’s attacked and has a clear alibi. It takes us a good long while before Cléo shows up, and it’s through her eyes that we start to see the events with clarity. There are many, many suspects, including Peter Lynch, Lara Florakis, Lara’s bodyguard, British investigator John Stanley (Alberto de Mendoza), Lisa’s boyfriend, a rando flight attendant, and even the hapless Greek Inspector Stavros (Luigi Pistilli). Any one (or any several) of them could end up being the killer.

The scorpion and its tail is a case of a MacGuffin within a MacGuffin.

And that’s rather what makes The Case of the Scorpion’s Tail so memorable: we’re intrigued and thrilled by the murders happening, but we have no idea what’s going on for so much of it. Even the titular piece of evidence, the Scorpion’s Tail itself, doesn’t come into play until more than 50 minutes into the run time. Much like many other gialli with animals in the title, the scorpion and its tail are a MacGuffin within a MacGuffin.

Luckily for Martino, Gastaldi’s scripts almost always make logical sense, within themselves at least. But they also require you to pay close attention, even if you are already confused. That’s because in a Martino/Gastaldi giallo, almost no one is fully innocent. In The Strange Vice of Mrs. Wardh, literally everyone but Julie Wardh herself is guilty. They’re whodunit mysteries where everyone dun something, and sometimes multiple people dun the actual murders in question. And the filmmakers show you more than what you need to solve the mystery, but it’s too much, and so you might guess the wrong perp, someone who ends up dead halfway through.

This is the joy of the giallo. You have your attractive, usually well-to-do characters jet-setting around the world, either witness to or victim of a crime, and generally the only way it’s figured out is when the hero or heroine is finally confronted by the murderer directly. Gotta love a detective story where the detective solves nothing.

To enjoy some gialli yourself, pick up Arrow Video’s Blu-ray of The Case of the Scorpion’s Tail and let us know if you solve the murder before the characters do.