Anyone that grew up with a collection of toy cars spent a lot of time racing them, smashing them and sending them racing around living rooms and stairs at blinding speeds. A new game came out that added another function to these versatile toys; pre-painted miniatures in a game of vehicular mayhem and destruction.

All it takes to play  Gaslands, by Osprey Games, are a copy of the rules, a few printed out templates, some six-sided dice and a handful of toy cars in the classic 1:64 scale. We got a chance to get behind the wheel of this light miniatures game and saw what it could do in the dirt. 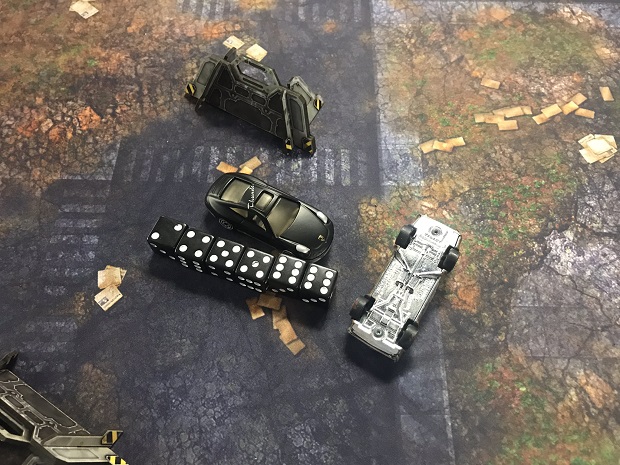 Players get a certain amount of points (called ‘cans’) to customize their cars with a variety of weapons, gadgets, and armor for their race.  This takes a few minutes, though players who want to get into the action more quickly can choose from a few builds in the main book. Cars are rated in hull points, their max gear, crew and their upgrade slots. Upgrades are generally used on weapons set in specific firing arcs but can also change the basic stats of a car. The vehicle’s max gear is the key to the game. Faster cars have more gears, but slower cars can pack more payload. Players then select a scenario from the book. These range from a death race where the players must drive through cramps gates to activate weapons to a classic demolition derby where everyone has a target on their tailpipe. Pole position is determined randomly after setup and the game begins.

Each turn is made up of six phases, one for each possible gear. Each gear phase allows the car to move, shoot and check to see if it wipes out. Players can also push their luck with handling dice if they want to attempt tricky maneuvers like power slides or jumping gears at the risk of gaining more hazard. That means the faster a car is going, the more times it acts in a turn. It also means it racks up hazard points more quickly, which make it far more likely for a car to wipe out and become a sitting duck while the driver gets it moving again. Maneuvers are handled with templates, some of which are only available in certain gears.  The rule with templates is that once a player picks one up they have to use it, which means there’s often a lot of intense scrutiny on the battlefield when lining up a shot or trying to dodge an obstacle. Shooting offers some flexibility when it comes to lining up a shot, but cars with turrets don’t need to sweat the details. When a car is destroyed by attacks or wipes out it stays flipped on the battlefield until someone smashes through the wreckage. 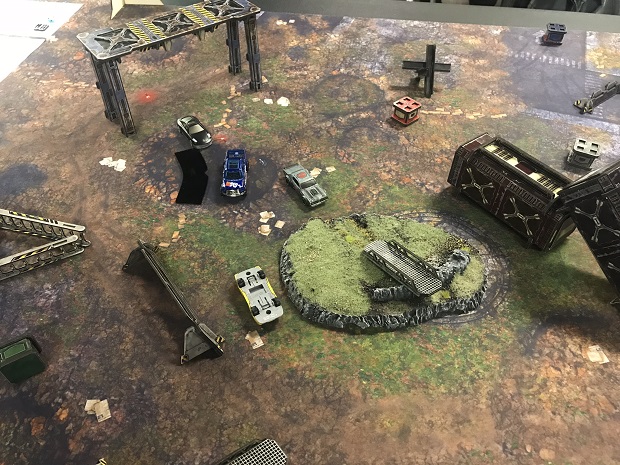 Most car combat games trace their lineage to the Steve Jackson Games classic Car Wars, but there are a few other strong influences in the DNA of Gaslands. The positional game of  X-Wing is a big factor in play here, and players around the table will groan with frustration when a shot doesn’t line up or pump their firsts when dropping a template that slickly moves their car out of the way of an oncoming vehicle. Head on collisions are nasty, because both cars add their speed together when rolling damage.

The other big influence here is  Formula D as seen in using gears as actions. Faster cars move and shoot more often, so the game rewards speed. But speed kills, too: Moving every phase often puts a car out of position or requires a sudden change of plans when an opponent suddenly veers into their path. 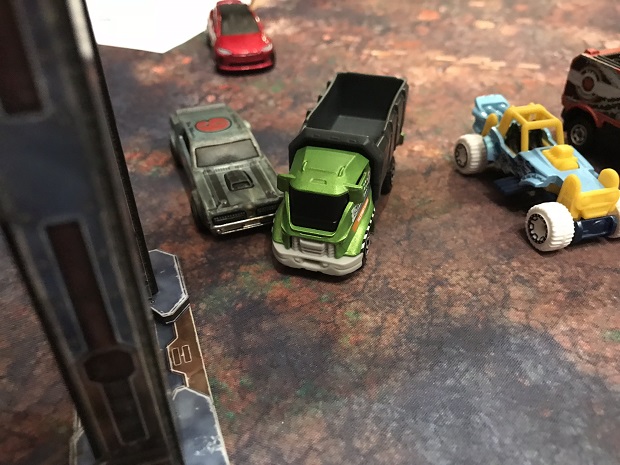 Gaslands is an excellent car combat game with another advantage under the hood; the entry fee is very low. The rules are about $20, the templates are a free download to print, and nearly everyone has an old car collection in their basement just waiting to be used as models. For those who don’t, all it takes is a trip to the store to pick up a handful of cars for a buck a pop. For miniatures players who enjoy customization, there are some excellent examples of people modding their cars with bits to match their loadout, and the makers of the game also have a wide selection of third party providers that make custom accessories for groups that want a little more flash for their games.

Whether you’re a minis player looking for an excuse to let out your inner War Boy or someone looking to make use of your (or your child’s) toy car collection for a fast, fun skrimish game, Gaslands is great way to get onto the fury road for an hour or two.