IMMORTAL WONDER WOMAN Team on Sending Diana into the Future

The DC Universe is changing. Future State is flinging our heroes out of their time and into… well, the future. As one of DC’s most iconic heroes, Diana Prince is of course playing a vital part. Her story is being told in Immortal Wonder Woman—alongside a brand new Nubia story—from Becky Cloonan, Michael Conrad, Jen Bartel, and Pat Brosseau. We chatted with the team, and have some exclusive art from the issue to boot! So prepare to get mythical with the minds behind Immortal Wonder Woman. 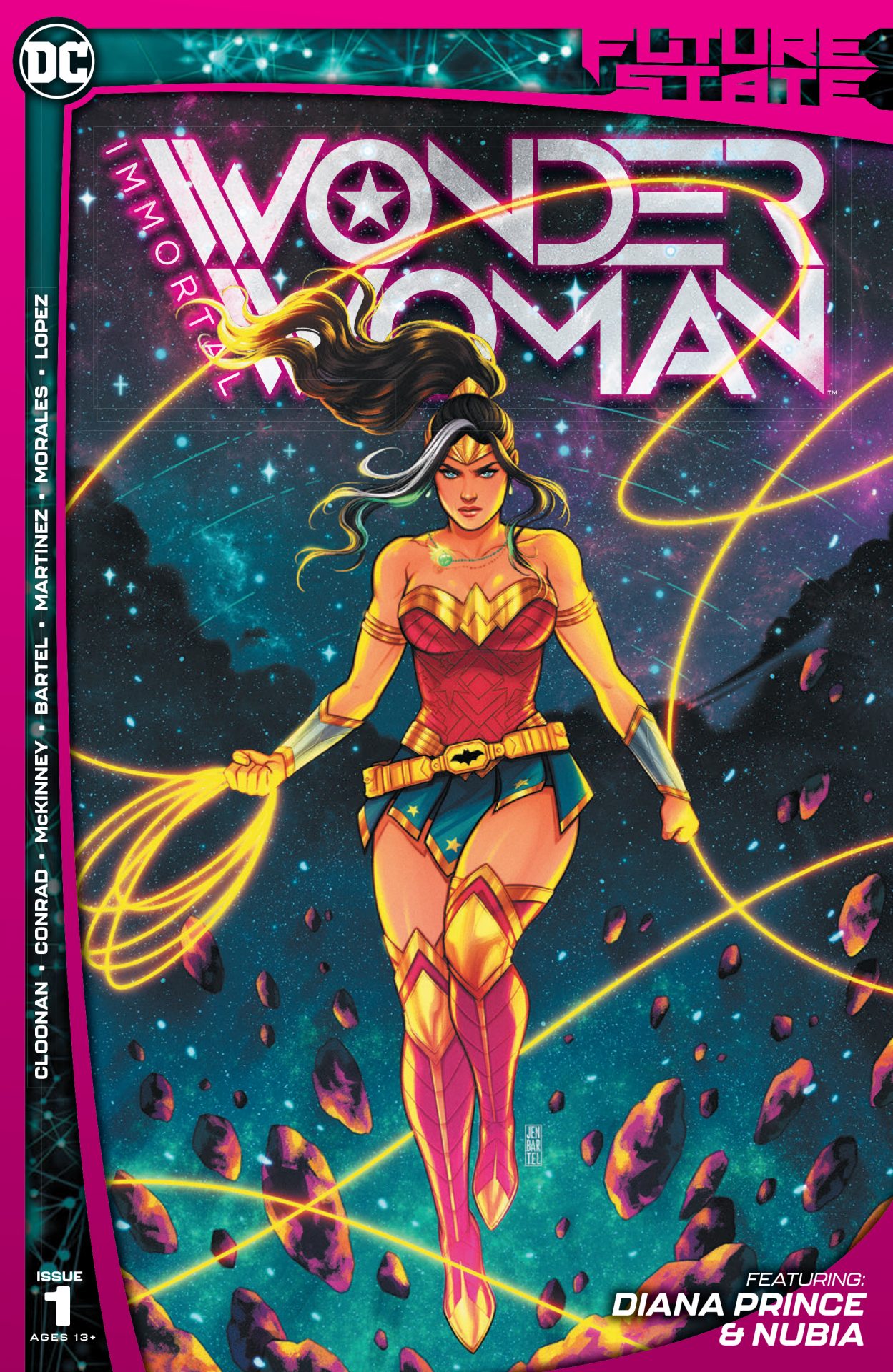 Fan fave artist Bartel crafted Diana’s vibrant technicolor world of Immortal Wonder Woman. Her vision of the Amazon hero is instantly recognizable, but also feels completely authentic to Bartel’s style. “I knew right off the bat that I wanted to preserve Diana’s iconic look as much as possible, especially since there’s so much legacy tied to it,” Bartel told Nerdist. She added, “I knew I wanted to give a nod to Cliff Chiang’s design. I love his work and his WW run so much. So I made sure to incorporate the stars and similar linework into her bodice.”

Bartel continued, “Becky and Michael both had a lot of awesome ideas on how we could quickly communicate to the reader that this was an older Diana. Despite the fact that she’s immortal, the years have taken a bit of a toll on her, even if it is just through a cool white hair streak and a couple extra wrinkles on her face. The design element I knew I had to add in just for me was definitely her ponytail hairstyle though. I love a good ponytail, haha.”

Bartel has accrued an impressive back catalog in both Big Two and indie comics. Still, Immortal Wonder Woman #1 represents a stepping stone for the artist. Although she’s done interior issues of Black Panther before, IWW was a new experience. “This is the first one I’ve done 100% on my own from layouts all the way to colors. I really wanted to challenge myself to try new techniques wherever I had an opportunity to. So there are definitely a lot of little glimpses at my growing pains on these pages.” 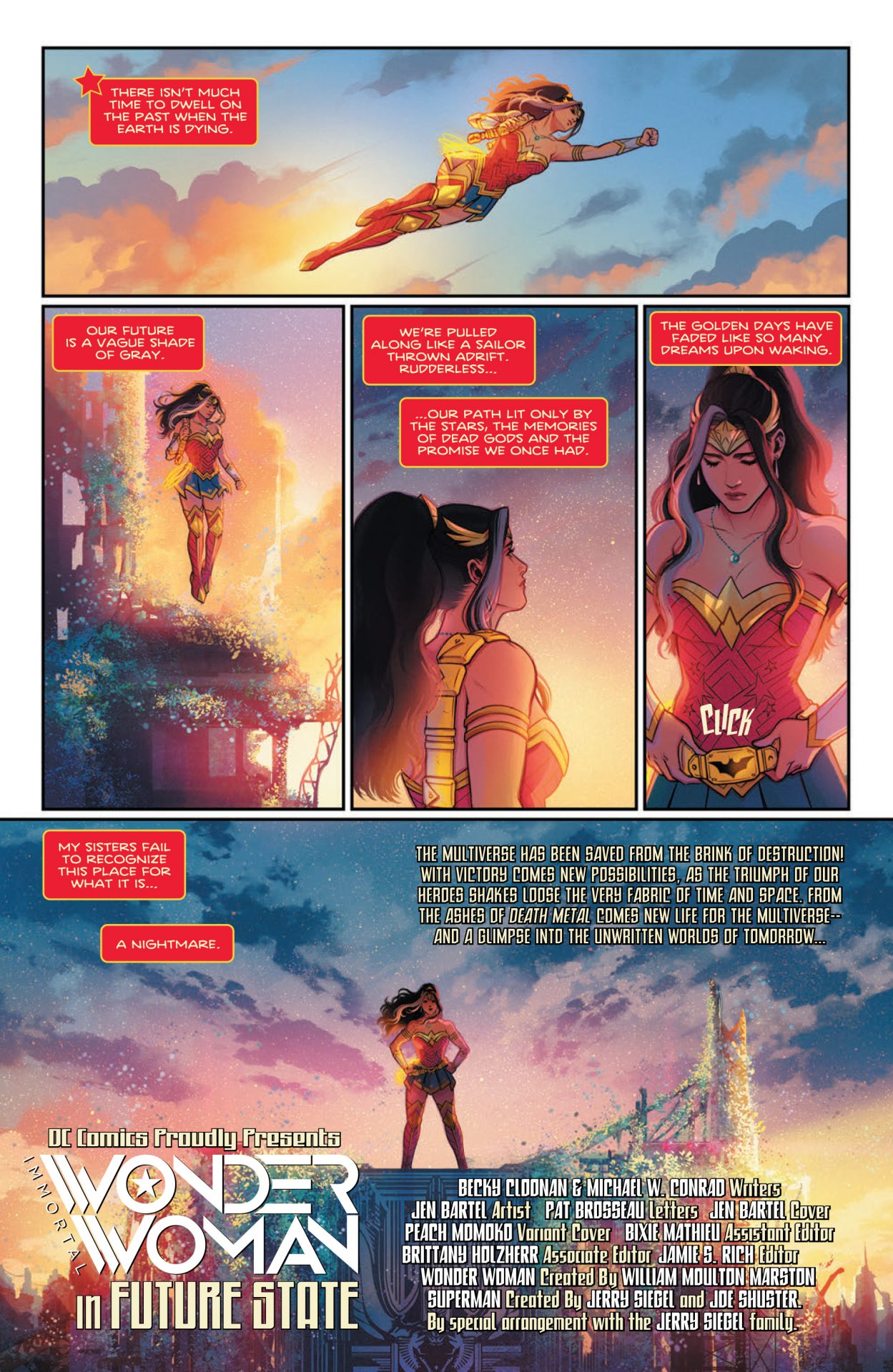 For all three creators, one thing is clear: this is a dream gig. “Writing Wonder Woman is a bit of a dream really. When we were presented the opportunity to tell a story about her in the deepest future we could imagine, all these bells started going off in my head,” Conrad said. “It felt easy, because this is the kind of thing fans like me have been imagining for years. Being able to actually tell it in Future State with very little interference on the vision has been great.” 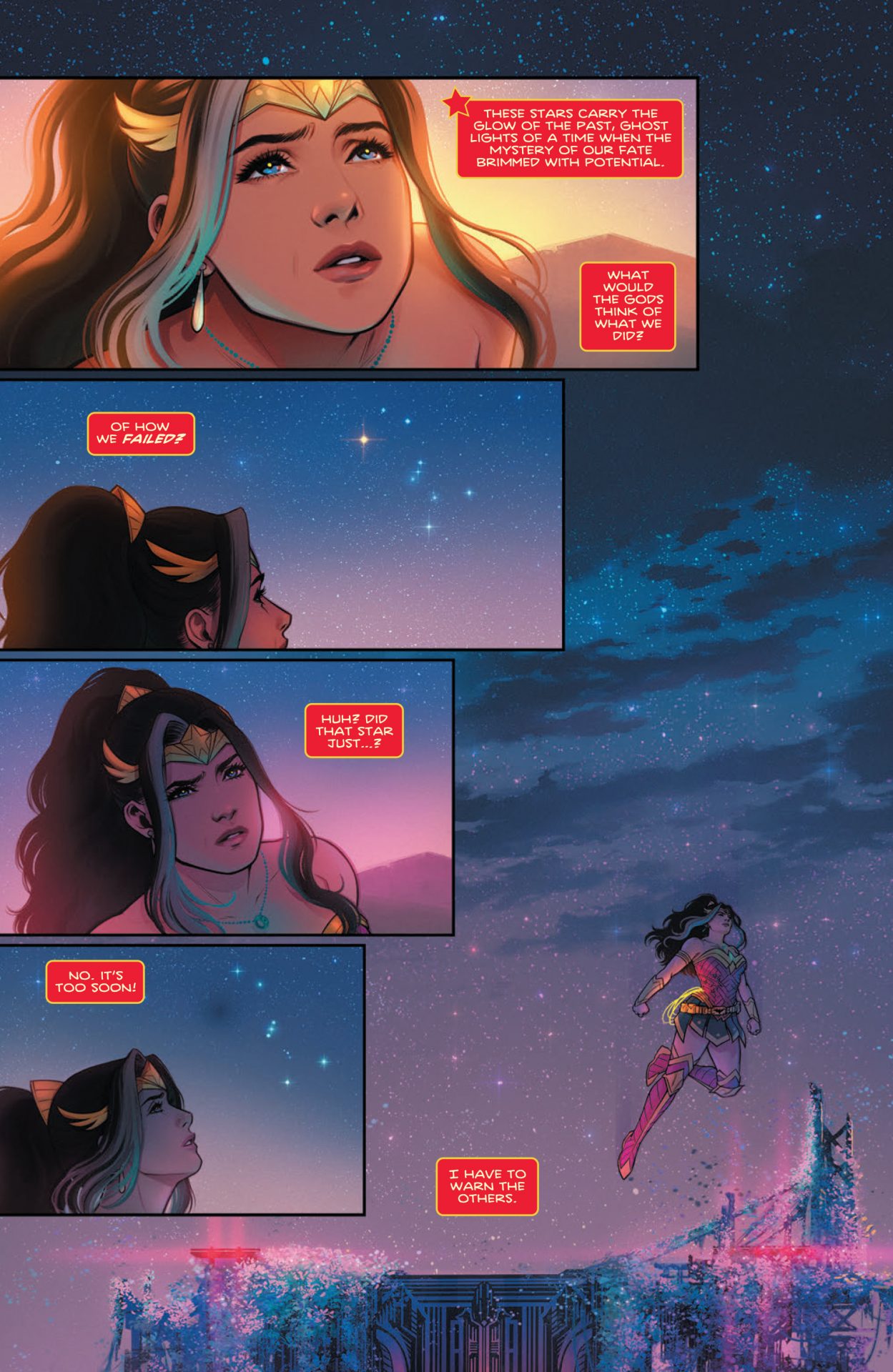 Cloonan agreed. “Yeah, Future State really gave us the perfect opportunity to tell the Wonder Woman story of my dreams. We really dig into her character as an immortal, a demigod, and what wielding that kind of power means for someone at the end of time. We requested Jen Bartel really early on too, so we went into this issue being able to imagine exactly what she’d bring to the script. It was a perfect storm, really.”

Bartel shared her team’s enthusiasm. “It’s been really surreal. I never imagined I’d be considered to draw Diana, and I feel incredibly honored to have the opportunity. Working with Becky and Michael on this has been a dream too; it feels like we’ve been on the same wavelength from start to finish!” 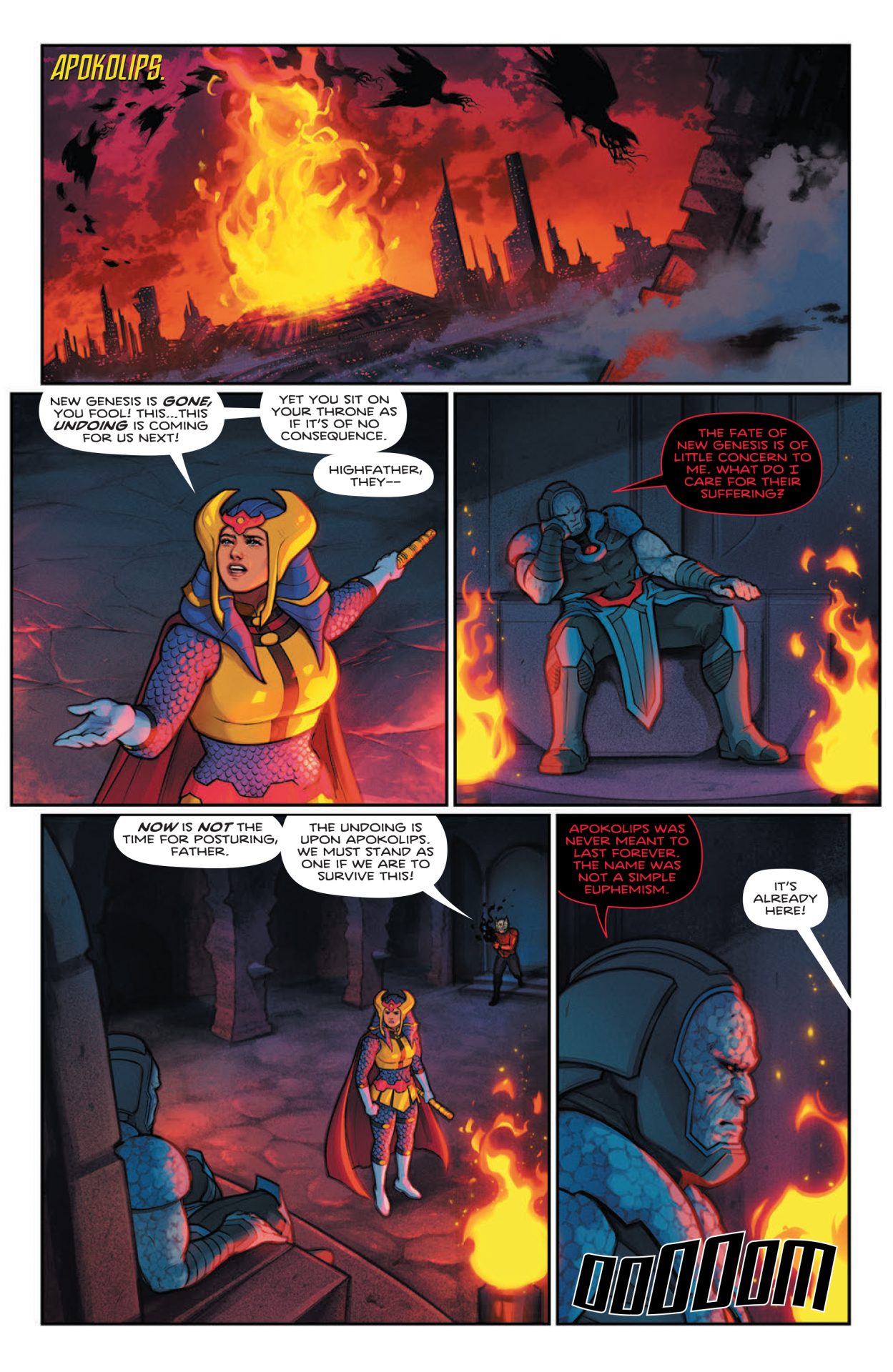 Cloonan and Conrad’s story deals with death, loss, and immortality. So what drew them to such a dark yarn? “When you only have a short amount of pages—in our case, two issues—to tell a full, engaging, emotionally impactful story, it takes a lot of work,” Cloonan shared. “I usually start by thinking of the end of the story, of what I want the reader to feel when they set the book down, and kind of work my way back from there. We were really lucky that we got to be a little poetic and indulge some heavy emotional beats, but also bring in some very big ideas as well! Our goal was to write a story that was not only true to Wonder Woman as a character, but also bring in our own vision of who she is and what makes her so great.”

Her co-writer Conrad expanded on the pair’s process. “Becky once told me that when writing a book, you have to shoot for the definitive story, otherwise it may not be worth taking the job,” Conrad said. “I know what she meant by that was less about competition with other stories, and more about telling the version of your story that is the most true for you as the writer. We pushed each other to refine something that could have been very long into a little diamond. I was worried we wouldn’t have room to tell such a big story, but then I remembered some of the short arcs in comics that have come to define entire characters. I think we did it.”

The Music of Immortal Wonder Woman 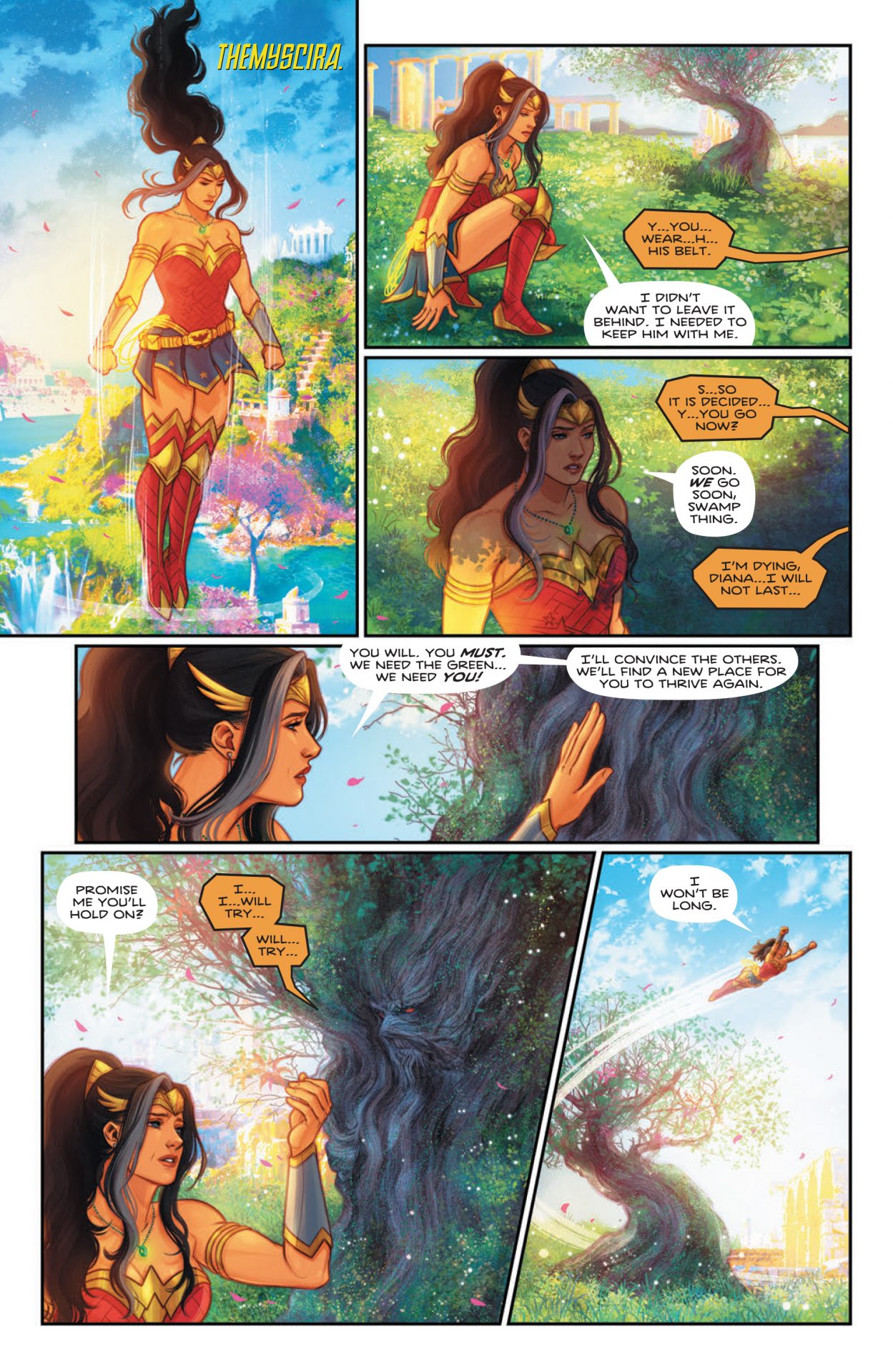 In case you enjoy a tailored soundtrack while reading comics, the team shared what they listened to while creating. “I like instrumental stuff while writing, Godspeed You Black Emperor, Mogwai, movie soundtracks,” Conrad said. “Right when we wrapped the scripts for Immortal Wonder Woman, this song ‘Lasso’ by Phoenix came on. I’d heard the song before, but I was struck by how perfect the lyrics were for this particular story.”

Cloonan said, “I mostly work in instrumental music too, but for this story it was a lot of Drab Majesty, Messa, Domo…I’ve been on an eternal Type O Negative kick for decades so it’s safe to say I probably listened to October Rust a bunch too.”

As for Bartel: “I listened to a lot of the Oblivion soundtrack while working on this story. It’s fantastic if you haven’t heard it!” 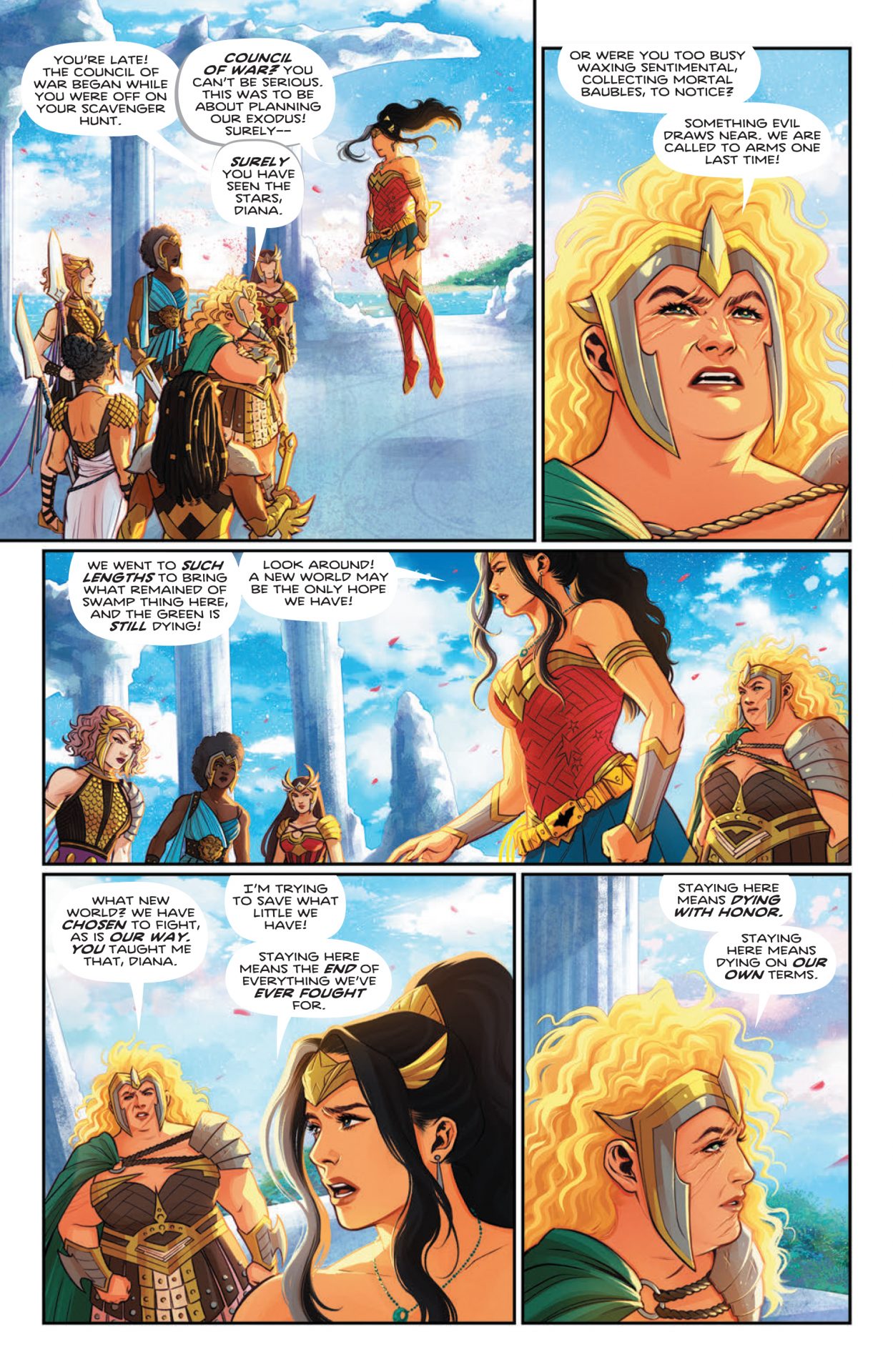 Fans will no doubt lose themselves in the immersive and engaging story. But the team members all have their own favorite things about the book. “If I had to pick one, it would absolutely be the scene in the Batcave,” Cloonan said, adding, “Gotham Academy fans might want to pay attention to the Robin Suit that Jen drew!”

For Bartel the answer was clear. “I think for me, my favorite page is the one where she’s just whipping Darkseid around like a rag doll with her lasso. I had never hand-lettered anything before this and doing the SFX on that page was really fun.”

And Conrad’s favorite? “The credits page. My name in a Wonder Woman book next to two of the most talented women in comics will never get old,” he laughed. “I’m only kind of kidding—I can’t pick a favorite, I’ll be interested to see what readers respond to.”