After years on the sidelines, Nubia is back at the forefront of the DC Universe. Author L.L. McKinney is the driving force behind her return. Her two new comics— Nubia: Real One, with Robyn Smith, Brie Henderson, Bex Glendining and Ariana Maher; and Immortal Wonder Woman, with Alitha Martinez, Mark Morales, Emilio Lopez, and Becca Carey—put Nubia center stage. Nerdist chatted with McKinney about her journey bringing Nubia to the page, the power of fiction, and superhero stories. 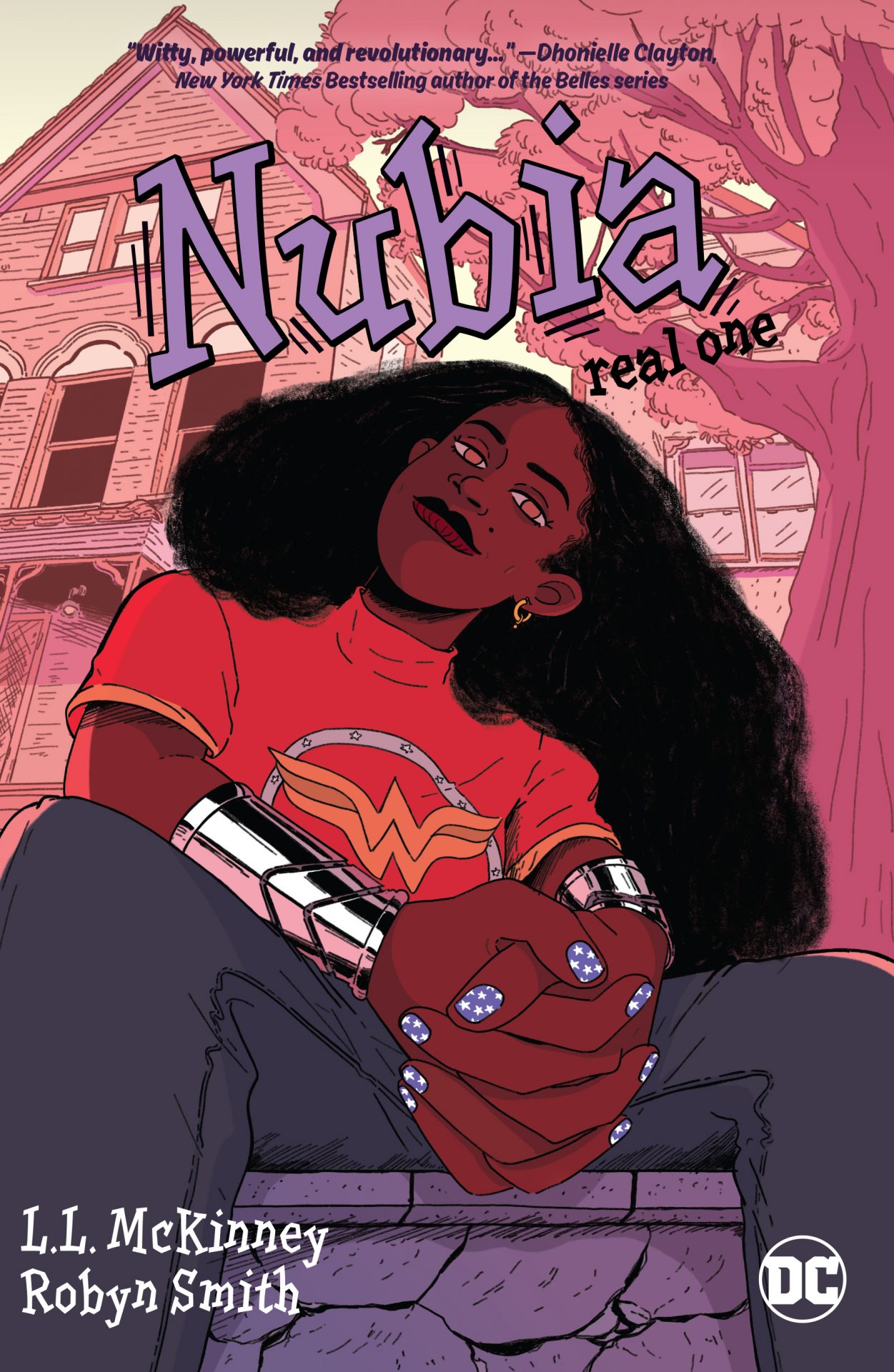 As both a storyteller and a fan, reintroducing Nubia to readers is a profound moment for the author. “It honestly means everything,” McKinney shared. “I’ve been very loud about my frustrations concerning what was done to Nubia post-Crisis [on Infinite Earths]. She went from being Diana’s twin sister, same powers and everything—and even a few of her own—to being a regular Amazon. And this isn’t me hating on the Amazons, but you gotta admit it was a bit of a downgrade going from being twin to Wonder Woman to guardian of hell or random advisor or whatever. Or, if she was around as Wonder Woman, it was an alternate reality or different world. I wanted the original Nubia back, as lots of fans did. Being part of her comeback is…affirming.”

McKinney’s passion for Wonder Woman‘s powerful twin sister goes back to childhood. “My first memory [of Nubia] is being at the library,” the author shared. “My parents used to take my sisters and I all the time. They had comics on this wire stand between the kid and teen sections, and the issue where Nubia and Diana are chained together with swords lifted was there. I remember being like, ‘Who was this Black woman fighting Wonder Woman?’ I picked it up and the rest is history.” 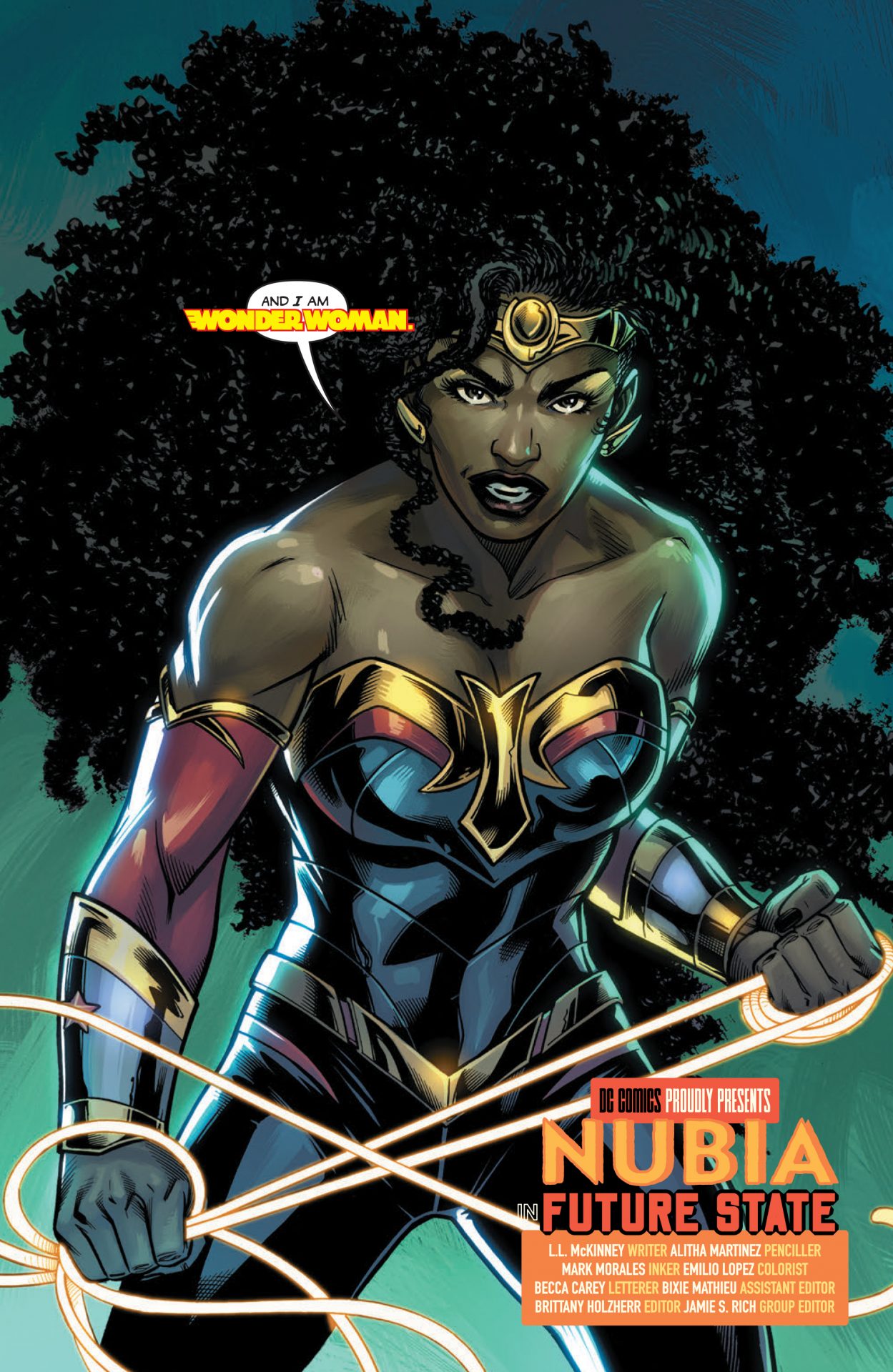 Though this is her first foray into comics, McKinney’s stunning fantasy series that began with A Blade So Black gave her a framework. “My main footprint as an author is in the YA space,” McKinney explained. “So crafting a story about a young Black girl with super powers wasn’t too far outside of what I was already doing with my original series, which is about a Black girl with super powers!” Once she finished Nubia: Real One, DC approached McKinney to take on Nubia in the mainline comics. “In that way, both stories were told entirely separate, but I based them both off of Nubia pre-Crisis. As far as a personal history that I stick to, it’s the original. Every time. Diana’s twin. I won’t write any other version of her.”

Interestingly, the two Nubia titles encompass both sides of DC’s current publishing initiative. The gorgeous and powerful Nubia: Real One represents the publisher’s move towards the younger readers market; meanwhile, the superhero action of Future State is part of their huge mainline event. McKinney shared her vision for both titles with us, beginning with the upcoming original graphic novel. “Nubia: Real One sees Nubia as a Black teen being raised in America and dealing with the nonsense that goes with that. She still has her Amazon origins in place, though.” 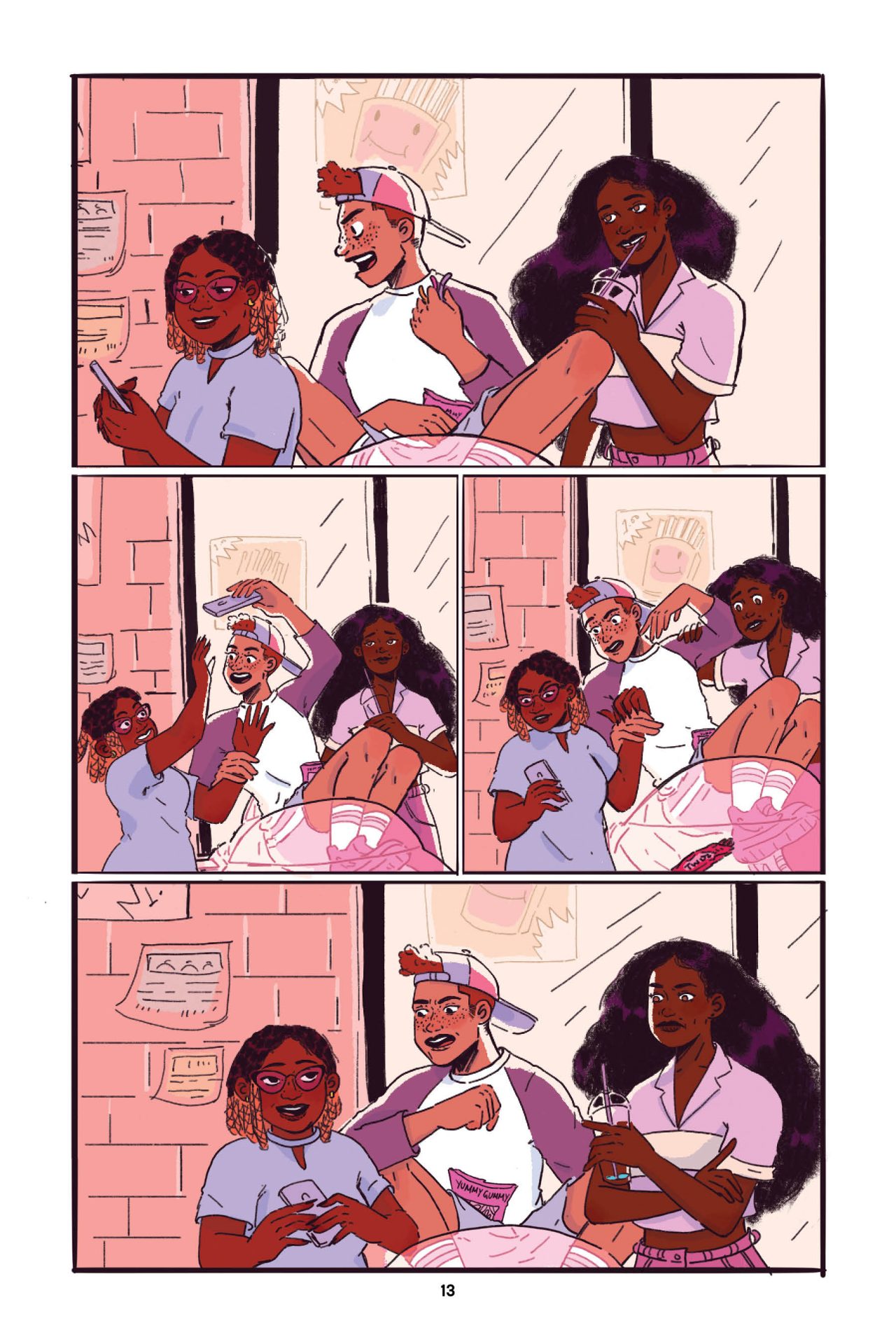 The author’s experiences as a writer speaking with young Black people shaped the YA comic. “On school visits and in virtual meetups, I talk to lots of Black teens about things they enjoy,” she explained. “Many times, these kids—who are brilliant and more aware than people give them credit for—will talk about how heroes will manage to save the world. But you never see those heroes doing anything about police brutality or trying to save the neighborhoods these kids come from or even caring about people from those neighborhood and what goes on there. And every time I was like, ‘You’re absolutely right.’ So, Nubia: Real One deals with that. It gives them a reflection of themselves and what they have to deal with in one of their heroes.”

While Nubia: Real One reframes the icon for a new younger audience, her Future State: Immortal Wonder Woman story is what McKinney calls “straight hero business!” As the author teased, “She’s here to knock heads and take names.” These two juxtaposing tales gave McKinney space to really dig into the hero. “Being able to explore different versions of this character has been important to me, and I hope either Nubia reaches the readers who need her.” 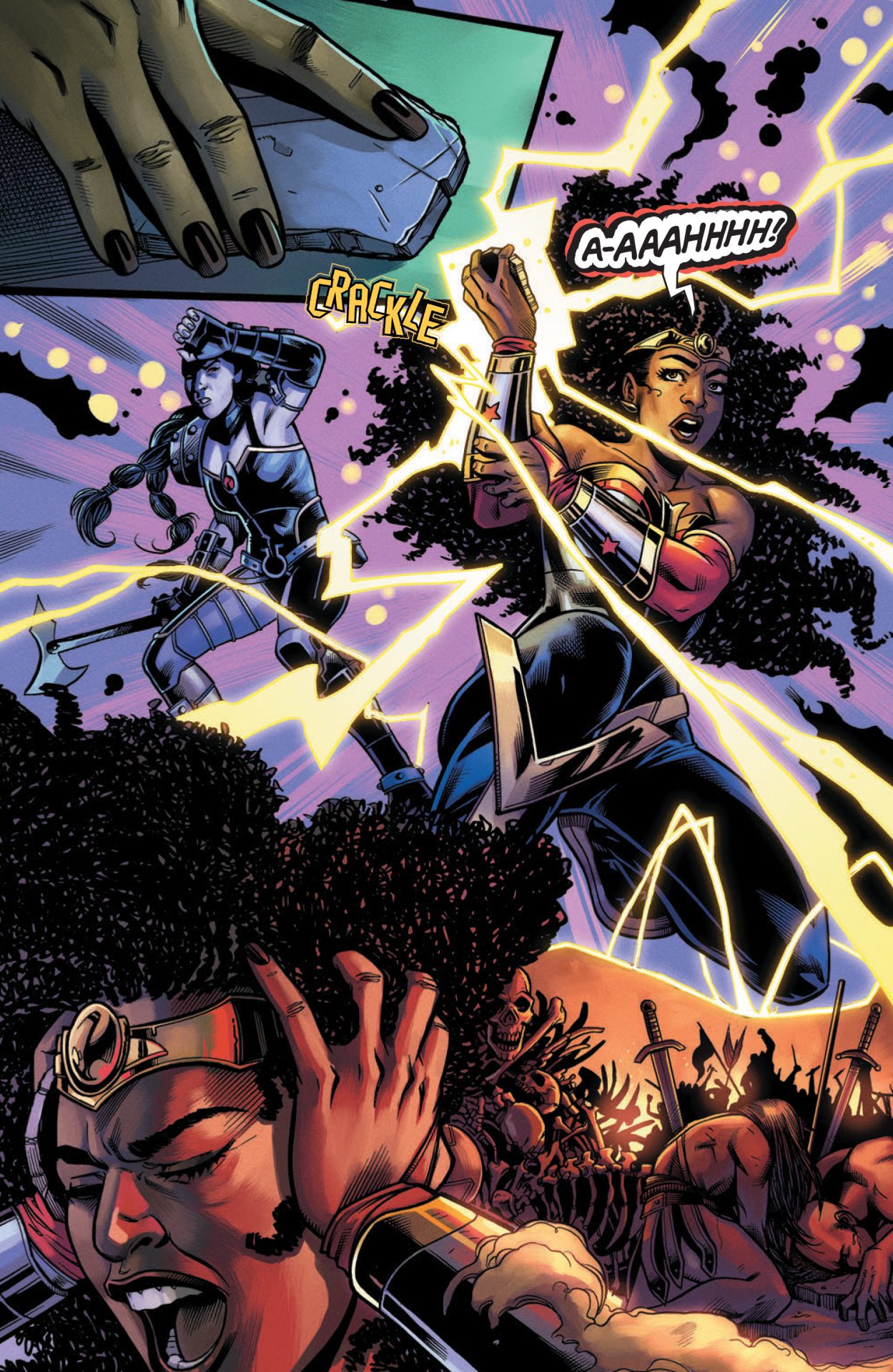 McKinney isn’t just juggling two different eras of Nubia, but also two different formats. Nubia: Real One is a vibrant full-size standalone graphic novel. But Immortal Wonder Woman is a more classic serial story. Putting together both at once afforded McKinney a unique learning experience. “The graphic novel came together over the course of a couple years, while Future State came together over the course of a couple months! Granted, the latter is significantly shorter, 40 pages compared to almost 200,” McKinney told us. “Younger Readers was much more open to what I wanted to do and the story I wanted to tell, likely because the graphic novels are part of their own universe and not the main continuity. DC Future State impacts a lot of stories in the main continuity, so your work is part of a larger tapestry, and that requires flexing a different creative muscle.”

Although the processes may have been different, there was one vital through-line for both books. “Having Black woman artists drawing Black women was my line in the sand,” McKinney shared. “I wasn’t going to do either project if they couldn’t do this for me, and for the books, really. With Nubia: Real One, my editor was like ‘Bet,’ and we went from there. It was a bit bumpier with Future State, but I was persistent and the team wound up respecting this, and I’m grateful for it. As a result, I got to work with Robyn [Smith], whose style really sells the warmth and heart at the center of Nubia: Real One. Her work encapsulates so much of the magic of Black girlhood. And Alitha [Martinez]’s style just fills the page with this unrepentant power and command that makes you sit up and pay attention.” 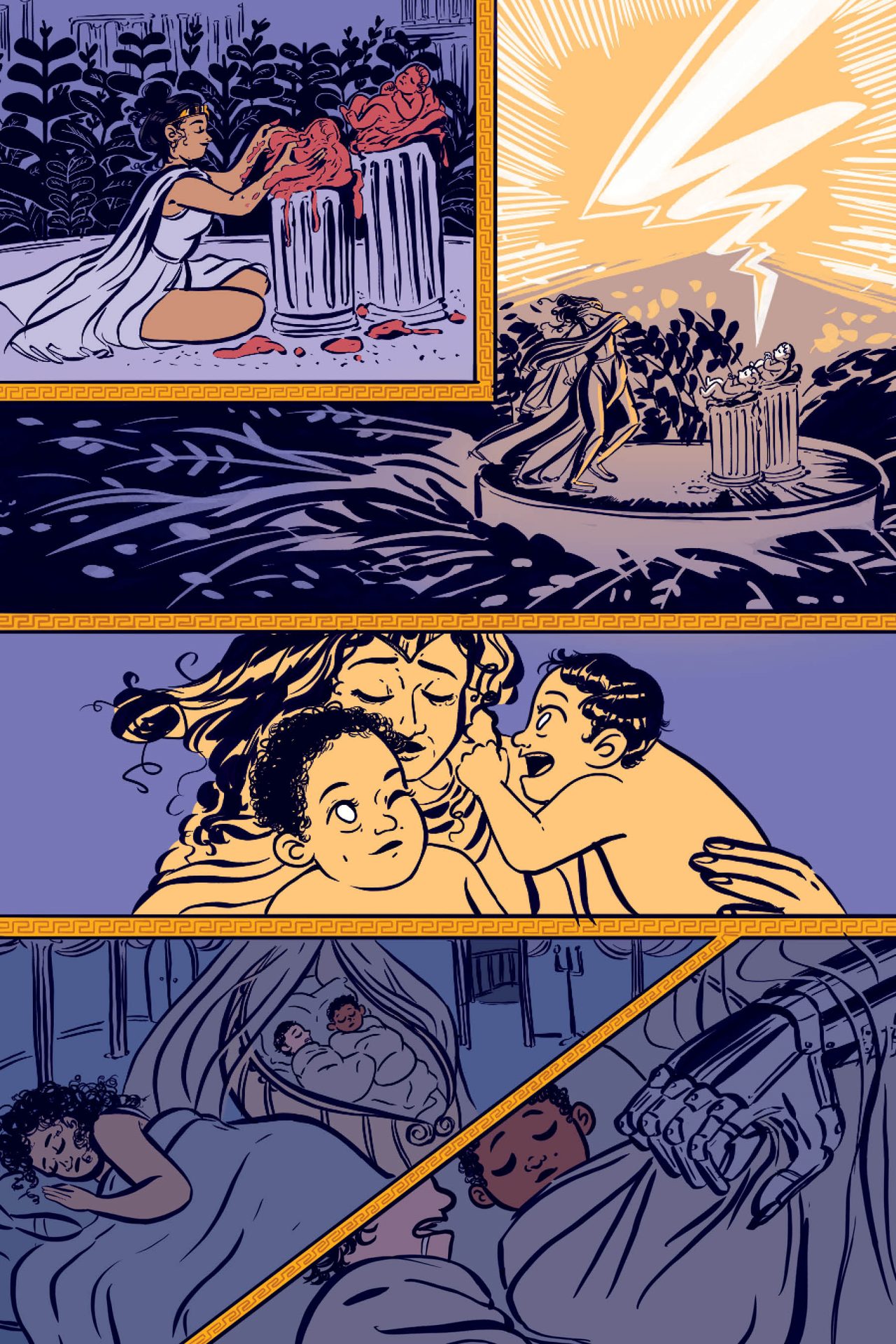 The response to the Nubia: Real One announcement threw the internet into paroxysms of joy. Readers were desperate to see Nubia given the respect and spotlight she deserved. Seeing her passion shared by other fans was a powerful thing for McKinney. “Oh man, it was…whew. It was incredible. The outpouring of love and support from the fans was heavy. I could’ve wrapped myself up with it like a blanket,” the author recalled. “Now that the book is out next month? I’m simultaneously excited and scared, but that’s how I get with the release of any of my work. I hope I did the fans proud. As far as if I have more stories I want to tell? Absolutely, I would love to see something like…Nubia meeting up with the Young Justice crew.”

Now that she’s playing such a vital role in the DC Universe, how does McKinney want to shape it next? Well, the author has a lot of plans. “Let me count the ways! Vixen, Rocket, I’d love to do a Black Superman in the main continuity. Red Hood is another favorite. Any of the mystic characters like Constantine or Zatanna. Doctor Fate? Seriously, the list goes on and on and on.”

Future State: Immortal Wonder Woman comes out on Jan. 19 and Nubia: Real One on Feb. 23rd.