We all know that feeling of waking up and feeling like we are trapped in the same routine. Doing the same old thing day after day can make it seem as if we have no control over our own lives. It’s almost as if we are nothing more than background characters in someone else’s story. It’s a depressing thought. At least it’s not literally true though. And at least we aren’t constantly avoiding helicopter crashes and being attacked with flamethrowers. That’s what Ryan Reynolds character has to face in the upcoming action-comedy Free Guy. He realizes he’s nothing more than an NPC in an open-world game. It’s a place where anything—and we do mean anything—goes. And that includes him taking control over his own existence to try and save his entire world.

“A bank teller who discovers he is actually a background player in an open-world video game decides to become the hero of his own story…one he rewrites himself. Now in a world where there are no limits, he is determined to be the guy who saves his world his way…before it is too late.”

This first look at the film doesn’t offer much in the way of plot, which will involve Taika Waititi’s character attempting to shut down the entire game. Instead this promo focuses on the film’s loving ode to the fun and absurdity of open world games. With the ever present—and ever ridiculous—weapons, adventures, tasks, and side quests constantly going on, the premise offers plenty of chances for comedy. There are also going to be tons of Easter eggs for gamers to search for.

And of course there’s a whole lot of dancing over victims bodies. How else would you celebrate? 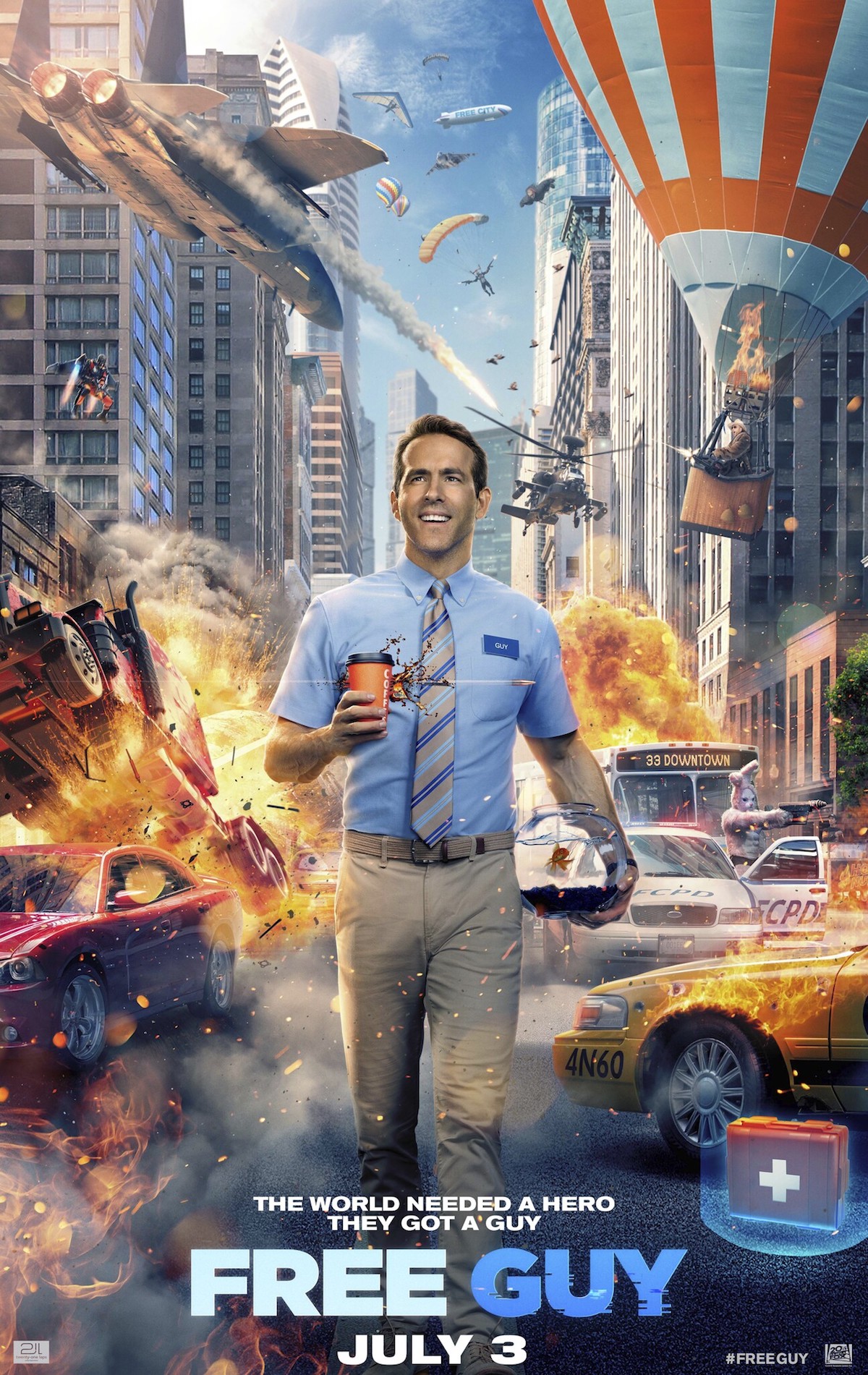 Free Guy is an entirely new IP, despite its obvious video game inspirations. It has no direct connections to any previous properties, either in video games or film and television. When we visit Free City, the name of Guy’s world/game, we will be going somewhere entirely new. When we get there we’ll be meeting an all-star cast with some of our favorite actors.

Ryan Reynolds plays the smiling, blue-shirt main character guy Guy. Jodie Comer (Killing Eve), seen in the trailer wearing a black wig, is his co-star in the film. The movie also features Joe Keery (Stranger Things), Lil Rel Howery (Get Out), Utkarsh Ambudkar (Pitch Perfect), and Taika Waititi (What We Do in the Shadows). If this group is even half as funny together in the film as they have been in the movie’s viral ads, it should be hysterical.

(Note: Ryan Reynolds and Taika Waititi are pretty sure this is the first movie they have ever done together.)

Shawn Levy (Stranger Things, Night at the Museum) directed the movie from a story by Matt Lieberman (The Addams Family 2019). Lieberman co-wrote the script with Zak Penn (Ready Player One).

Maybe we really are background characters in a terrible open world game. (Free City looks way less awful than the world of 2019). But at least our creators are giving us an original movie to see.

Free Guy opens up its world next summer when it comes to theaters on July 3, 2020.