Can Frank Miller Transition From Controversial Creator to YA Storyteller? - Nerdist

Can Frank Miller Transition From Controversial Creator to YA Storyteller?

Frank Miller has long been one of the most celebrated creators in comics, but over his 30+ year career he’s also been one of the most controversial. This is a man best known to classic comic book fans for creating the seminal Batman miniseries The Dark Knight Returns, as well as his gritty black-and-white pulp noir Sin City. But in later years it’s been Miller’s aggressively confrontational, Islamophobic comments–and comics–that’ve defined him to many younger fans. Also, when we critically look back on his most famous works, a lot of them are problematic at best in their representation and treatment of women.

So it was with much surprise that we learned on Friday (via EW) that Frank Miller will turn his hand to YA graphic novels, illustrating a book called Cursed, a new Arthurian legend focused on Nimune, the first person to wield Excalibur who would later become the Lady in the Lake. And shortly afterwards it was also announced that Miller would be writing a new Carrie Kelley YA original graphic novel at DC, marking an apparent transition in the controversial creator’s career. 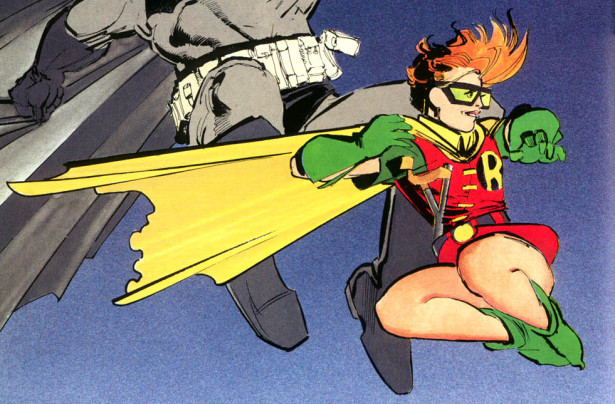 Miller has been on something of a redemption tour over the last few years since the announcement and subsequent release of the questionably titled The Dark Knight III: The Master Race. These announcements seem like a strange route for him to go; they’ve got a lot of fans questioning just how Miller will handle titles that focus on the interior lives and adventures of young women, and just as importantly, how he’ll handle stories that are aimed at a younger audience. The rise of YA novels and graphic novels has been nothing short of a cultural phenomenon, and it’s unsurprising that DC and other book publishers are attempting to cash in on the trend. After all, cartoonist Raina Telgemeier is one of the best selling authors in the world with her gorgeous OGNs like Smile, Sisters, and Ghosts. But can a man whose most famous work turns Catwoman into an abused, beaten stereotype of a sex worker create relevant work to appeal to young girls? Miller, who’s best known for his mature stories, will have to make some huge changes in his stylistic and storytelling choices to create solid, enjoyable, and appropriate YA stories. Cursed will see Miller do something he hasn’t done for almost 30 years–illustrating someone else’s writing. Writer Thomas Wheeler will be collaborating with Miller to craft a female-led young adult reimagining of Arthurian legend, which has the potential to be really exiting, but also has a lot of scope to go wrong. Medieval-set stories are often used as a way to tell a tale that’s homogeneously white, and often very violent *cough Game of Thrones cough*. But Miller and Wheeler have the chance to embrace the fantastical elements of Arthurian lore and learn from other brilliant YA fantasy series that have garnered so much success, establishing a diverse reinvention that will need to stay away from some of Miller’s standard “Strong Woman” tropes that usually center on assault and hyper-sexuality.

I’m a huge fan of Carrie Kelley, who Miller introduced in the seminal The Dark Knight Returns. The first female Robin, Kelley was an immediate fan favorite, and her dynamic character design and tough-as-nails attitude saw her make a compelling compliment to Miller’s grizzled Batman. Miller already attempted to reinvent Kelley during the first issue of The Dark Knight III: Master Race when he–in a radical move–put Kelley in the cowl! Sadly, she never truly took on the Batman mantle, but it showcased Miller’s desire to center a young woman. Hopefully his Kelley OGN will expand on that, and though in the comics Kelley is as violent as her mentor and the city they protect, it would be fantastic to see a vulnerable and kinder Kelley. As for the look of the book, artist Ben Caldwell has a track record of creating fantastic young female protagonists like Hotdog Girl from DC’s prescient near-future Prez, so we can’t wait to see his vision of Carrie.

How do you feel about the potential of Frank Miller becoming a name in YA? Are you a huge Miller fan and think I’m being harsh? Or are you weary of the old guard of comics? Let us know below!

Is it Miller time again?