Most board games are a free-for-all with everyone competing against each other. But sometimes, it’s good to show a little teamwork and break into small factions. Whether you’re gaming with another couple or want to collaboratively compete, here are four great games for small teams. 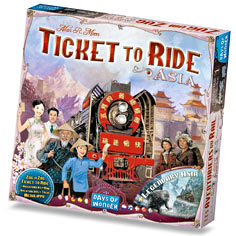 Ticket to Ride is a classic of modern board game design. In the usual game, players claim routes and connect cities before their opponents can interfere. Although there are many maps, and some feature unique rules, none is more satisfying than Team Asia.

Players break into two or three teams of two. Each team shares a train color and builds together. At game start, each player draws a minimum of three destination cards indicating which two cities they must link. But of those cards, only one is shared with the partner. Two more can be shared but only if a player gives up the rest of their turn to do so. So the teams must manage whether it is better to communicate through play (“if I grab red cards, she’ll know where I want to go!”), or simply get the info out in the open at the cost of a turn.

What’s more, when a player draws cards, only one goes to their personal hand. The other is placed in a communal pile that either member of the team can use. Will your partner get the hint that you’re saving up for a particular route? Or will your dastardly partner use those cards you were saving to build elsewhere? It’s an interesting twist on a familiar concept and with explicit communication limited, it fosters an environment where players scrutinize their partner’s moves as much as their opponents’. 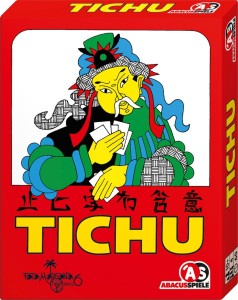 Many classic trick taking games rely on partnerships. Tichu is what resulted when Bridge got too close to the radiation source and developed superpowers. In Tichu, the players work as a team to empty their hands of cards before their opponents do. The rules are easy enough to learn, but the strategy is nuanced and it takes a while to become proficient.

When a player begins, or leads, a hand, he does so by playing out a combination of cards. He can play one card, a pair, a three of a kind, a straight, or a full house. Then each player in turn order gets a chance to play a higher version of that same thing. So if I play a pair, you have to play a higher pair to beat me. The winner of the hand keeps the cards (some of which are worth points) and then leads the next hand.

Going first is essential because it lets you determine the pace of play. Maybe you’ve got a killer set of three-of-a-kinds. Well, if a three-of-a-kind is never played first, you’ll never get to play yours. So you need to win a hand (or trick) and then lead off with your triplets. You and your partner have to rely on and compliment one another. If my partner is about to win a trick with a King, I don’t want to play an Ace on top. If I do, I’m basically wasting his King since my team was going to take the pile and have the lead anyway. Add on top a few special cards and “bombs,” which are special combinations that can be played out of order, and you have a fantastic strategy game where you have to anticipate and support your partner’s play. 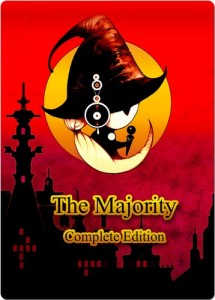 It’s not trick-taking, but The Majority is a partnership card game that is highly unique. Two teams of two are competing to get cards in three different colors–red, blue, and yellow. But the goal is not to have the most of a color. Getting the most gets you only a small benefit. The real goal, is to be the player with the second most of a color.

Playable by four only, The Majority gives everyone a hand of just a few cards. The players each select one and play them simultaneously, then the rest are passed to the left. So as you select cards to play, you’re taking not just what you want, but what you’re hoping to keep from an opponent.

And it’s not just about the numbers. Some of the cards also provide a special effect. Maybe they eliminate all other cards of a given color or, perhaps even better, steal all the cards of a color played that turn. All the while, you try to constantly keep just shy of the leading player or let the third place catch you. And if you and your partner can be most and second-most of a color, it’s all gravy. 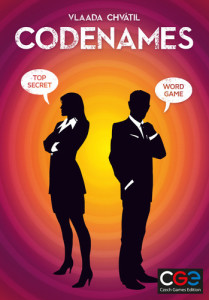 But if you have a larger group and want to break into two teams, it’s hard to go wrong with Codenames. The title tests your ability to communicate within strict limitation. In fact, you only get to say two words–one word at a time.

There are two hundred double-sided word cards. To start, 25 cards are randomly drawn and placed in a 5 x 5 grid for a game. Players are broken into two teams and each selects a single player to be the clue-giver, or “spymaster.” Then a key card is drawn to show the spymasters which words belong to the red team, which to the blue, which words are neutral, and which word is an automatic loss.

The spymaster says one word to their team, followed by a number–how many of the team’s cards that relate to that word. Spymasters have to be careful to take into account how their players will associate words, since words often have multiple meanings or references based on context. If a team hits the assassin word, they lose immediately! So, you and your partner or team must quickly learn to not only communicate, but to draw the same kind of linguistic connections.

What partnership or couples games do you most enjoy? Tell us about it in the comments.