Love tabletop games? So do we! Join Becca Scott where she breaks out fantastic board games on  How To Play and  Game the Game every week here on Geek & Sundry!

Set in feudal Japan, Rising Sun is a game of political intrigue and ferocious combat for three to five players. In this latest offering from designer extraordinaire Eric Lang and artist Adrian Smith, players must form alliances with their opponents and use their skills of negotiation to lead their clans to victory on the battlefield.

Rising Sun is another stellar production from the folks at CMON, with high-quality miniatures and top-notch components enhancing the gameplay experience. No matter what clan you choose, you’ll be impressed by the game board, player screens, political and war tiles, political mandate tiles, season cards, alliance tokens, monster figures, and your clan’s bushi, shinto, and daimyo figures.

Although a spiritual successor to Blood Rage, Rising Sun has more in common with the classic board game Diplomacy, where cutting side deals and forming alliances are both a key part of a winning strategy. You and your allied opponents will receive additional benefits from certain actions and the threat of betrayal lurks around every corner.

The game is played over three seasons, consisting of five phases each: seasonal setup, tea ceremony, political phase, war phase, and seasonal cleanup. Each player’s turns are quick, with the bulk of the action occurring in the political and war phases. Here, everyone will choose actions that allow them and their allies the ability to move, recruit other figures, produce resources, acquire additional powers, or betray their current ally.

If there’s been a betrayal, then the betrayer immediately loses honor, but benefits from their choice: killing off and replacing opponents’ figures with their own. Yes, politics can be a deadly endeavor. 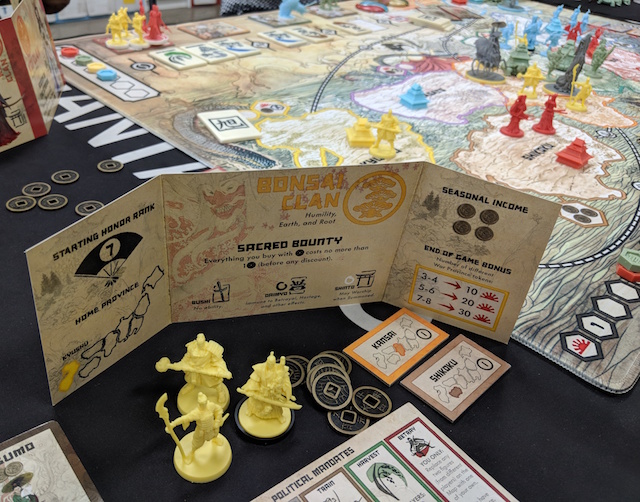 During the war phase, players resolve each province to determine a winner. Like Blood Rage, Rising Sun is a dudes-on-a-map game that will satisfy fans of the area control mechanism. There’s a bit more going on here, though, with shades of another terrific area control game, Cry Havoc, in the battle-resolution phase, where even your vanquished foe can benefit through clever play.

At different points of the game, any of the combat options can be viable strategies: you can capture hostages during battle, hire ronin for additional strength in combat, or commit seppuku and gain honor and victory points. 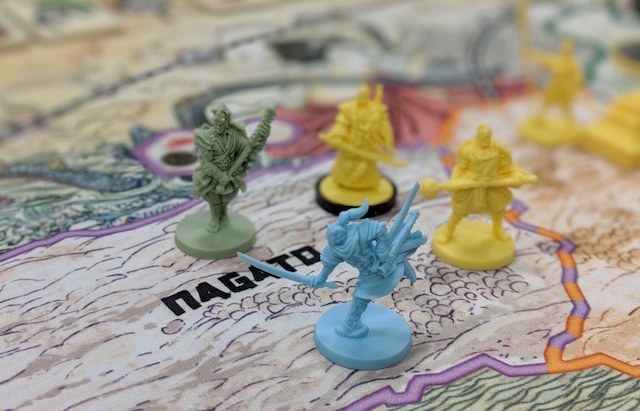 Bluffing is much more important in Rising Sun than other area control games; which actions you choose can affect more than just the immediate fight. Conceding certain areas can yield bigger benefits down the line, such as committing seppuku in order to move up the honor track, which will, in turn, give you the tiebreaker both during the game and at the final scoring phase.

Rising Sun is not the streamlined dudes-on-a-map experience of Blood Rage. It’s a longer and much deeper game, with several factors influencing your overall strategy. From who to form alliances with to the perfect timing for a betrayal, your ability to adapt to constantly changing conditions will determine whether or not your clan is worthy of victory. This is an epic experience, best shared by your favorite gaming partners, especially those who aren’t going to be upset when you betray them to further your clan’s objectives.

Do you play area control board games? Tell us which ones in the comments!

Ruel Gaviola is a writer based in Southern California. He loves board games, books, cooking, traveling, Star Wars, and date nights with his wife. He writes about games for  iSlaytheDragon, podcasts about games for  The Five By, and his name rhymes with Superman’s Kryptonian name. Follow him on  Twitter and read his blog  here.