Your dad doesn’t have to be Daedalus for you to know about the dangers of flying too close to the Sun. But the sad tale of Icarus is worth keeping in mind as you read this story. Because as cool as it sounds, taking a flying motorcycle 15,000 feet in the sky sounds like the start of a modern myth. Especially when it can reach speeds of 300 miles per hour.

Jetpack Aviation’s “ The Speeder” (which we first learned about at DesignTAXI) is a sci-fi dream made a reality. It’s like Star Wars speeders crossed with a Jet Ski and a helicopter. Featuring four turbojet engines, the 231-pound machine can run on kerosene or diesel fuel. It’s also fully stabilized and features a fly-by-wire. And now it’s ready to hit the market.

According to Luxurylaunches, the company’s jet-powered device completed a successful run of tethered test flights over five months earlier this year. The P1 prototype was able to take-off, climb into the sky, hover in the air, twist and spin, and “perform slow transitions into forward flight.”

Now that they know it works, the company has already begun work on a more advanced prototype. It will replace the original model’s large aluminum chassis with a smaller frame consisting of carbon-fiber body panels. And Jetpack Aviation already has plans to give the third prototype a fully-formed body along with compact wings. As well as double the amount of engines. Which they say will allow up to 600-pounds to travel 300 miles as high as 15,000 feet for 20 minutes. All in a vertical takeoff and landing vehicle (VTOL) that can fit in the back of a truck. 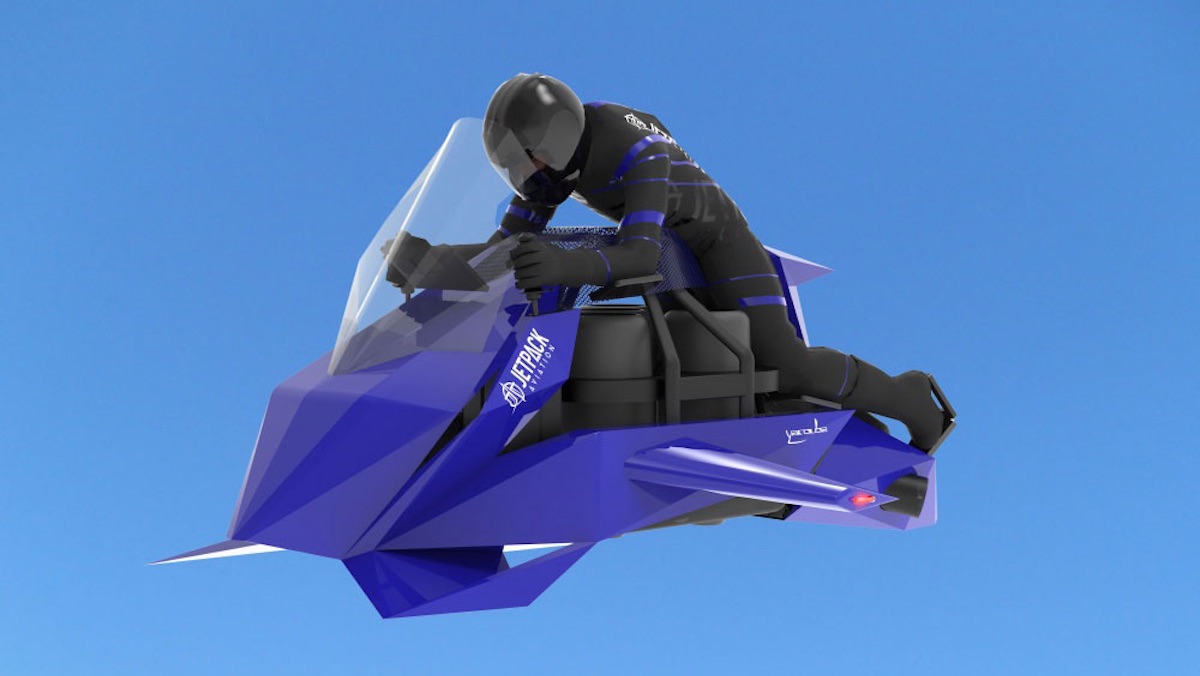 The world’s first flying motorcycle will also come in both recreational and military/commercial models. Each with a big initial price tag of $380,000. Which strangely enough is the best reason to feel good about this equally intriguing and terrifying machine. If Daedalus spent that much on Icarus’s wings, he wouldn’t have had to rely on wax.