Fly a Viper on Your Tabletop in BATTLESTAR GALACTICA: STARSHIP BATTLES - Nerdist

Fly a Viper on Your Tabletop in BATTLESTAR GALACTICA: STARSHIP BATTLES

Yes, the reimagined Battlestar Galactica ended in 2009, and yes, we don’t give a frak. Neither does Ares Games as their newest release, Starship Battles, is a head to head dogfight with Colonial Viper on Cylon Raider action. If you ever wanted to turn to your partner and ask, “What do you hear, Starbuck?”, your time has come.

This is a miniatures game partially derived from the venerable Wings of Glory, the system that originally provided the inspiration for X-Wing. The base set includes four ships boasting the strongest pre-painted models we’ve seen. From the tiny call signs emblazoned below the canopies to the rippled surface of the Cylon Raider, it’s visually striking and presents a compelling table presence full of atmosphere. While those looks will get your eyes to flirt, the system will draw you in and keep hold. 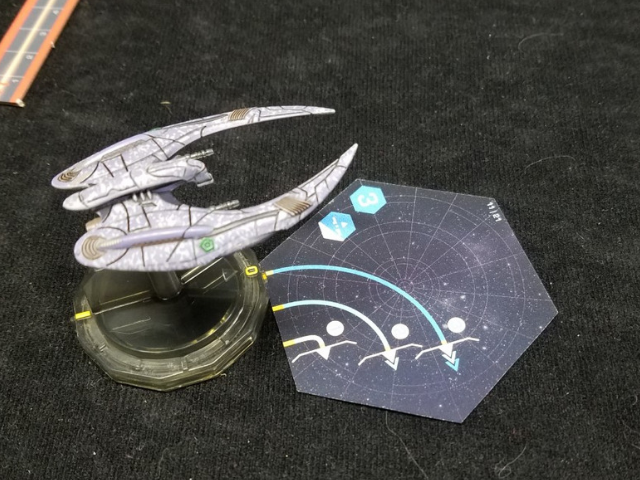 The framework is old hat. You have a deck of cards–with the corners removed of course–and everyone simultaneously plans a maneuver for the upcoming turn. Then we all reveal and use those cards as a template, placing it against the nose of our ship and scooting the little base along the flight path.

Upon first blush, it actually looks frighteningly complicated. The maneuver cards are peppered with numbers and vectors and your head may spin like a Viper pilot gone EVA. It all internalizes rather quickly, however, as you utilize this nifty plastic dashboard to set your speed and track other vitals.

Nifty is a funny word. I have a bit of a love/hate relationship with these consoles. Their appearance as a cockpit control panel is striking. You shift a little throttle to set your speed and it feels, albeit faintly, like you’re in that warm seat trading comm chatter with Apollo and Starbuck. The issue is that the sliders and nobs are quite difficult to turn. They get stuck easily and require a bit of noodling around in the midst of the action. While this can be annoying at times, I do find them more pleasant than managing a collection of chits or tokens. 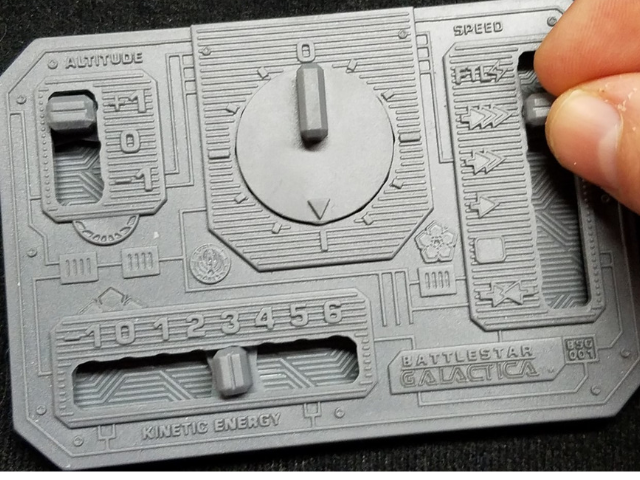 The main utility of the plastic consoles is managing the new systems of kinetic energy and rotation. This is the signature mechanism of this design and what separates it from a moniker of derivative.

One of the hallmarks of space combat in Battlestar Galactica is the realistic vector movement. The game models this by tracking your kinetic energy and momentum. As you pick up velocity you can rotate your ship along its axis of movement and face an altogether different direction.

So let’s get the view from the cockpit: You’re doing a fly-by on a scrum with two Raiders pounding your fellow Viper. After selecting a straight maneuver, you set your speed and rotate the little dial at the top of the dashboard 90 degrees to port. After everyone reveals their maneuver cards you push your Mk.II Viper along the trajectory and spin the miniature atop its base.

This allows you to pull off a drive-by as you blast away with your forward mounted cannons. As you rake the flanks of the Raiders you keep drifting along your previous vector, continuing to plan straight maneuvers for another turn.

A Cylon Raider peels away from the pack and clings to your tail. You continue to rotate, now a full 180 from your original position and your firing arc lined up to the rear of your drift. It flies right into your six and you trade blows to the jaw.

“Nothing but the rain, sir.”

This evolved take on realistic thrust is electric. It re-focuses the game on maneuvering and out-witting your opponent, even if they’re a chrome toaster with computational ability far beyond your potential. The style of play is a more cerebral and thoughtful exercise than similar entries. There’s a much wider range of movement options and everything’s far less predictable. Yet it still manages to move along at a rapid pace as the system embraced is relatively simple. 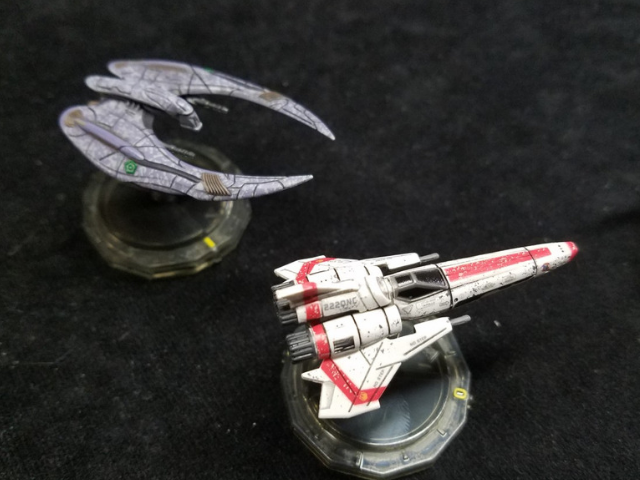 One of my concerns coming into this design was the complexity tax. I’ve never been an admirer of the Wings of Glory altitude rules to model a three-dimensional game state, mostly due to the baggage and overhead. Thankfully, the kinetic energy system is smoother and more natural, blending with the familiar systems to present a rules density that’s palatable and engaging.

Beyond the gripping movement system is a selection of unique inclusions that further distances this release from its predecessors. You can man your Vipers with specific pilots such as Apollo or the two Cylon serial numbers included. You can utilize advantages and flaws to add some tactical oomph with special abilities. There are even several scenarios that cleverly portray important scenes from the television series. Remember when Starbuck jury-rigged that downed Raider and flew it back to Galactica? Yeah, that’s here.

While there’s a bevy of options, it never strays from the Wings of Glory foundation’s ease of play. You don’t have to spend 30 minutes building a list or calculating point totals before flying. Instead the focus is on action and drama.

I’m also quite fond of this as a near-complete product. Four ships is a solid amount and allows you to comfortably play in the 2v2 or 1v1 formats. Unlike X-Wing, the cognitive decisions framed around maneuvering and managing your deck of cards results in satisfying play even when fielding a single ship. One of the main challenges with this new title is pulling in players who are frolicking in these other sci-fi and historical product lines, and the all-inclusive nature of this boxed set reduces the friction to some degree. 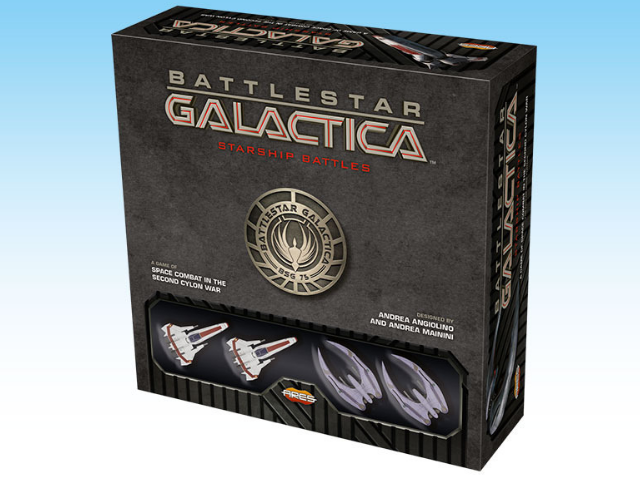 Now it’s never that simple. Expansions are of course coming and Starbuck isn’t included, although you may be able to find her as a convention promo card. You will also likely want a Raptor or two and I eagerly await to see how they expand the Cylons (Scar? More “pilots” whose names appear as lines of code?).

Still, Battlestar Galactica: Starship Battles is a hell of a shot across the bow. It really feels as though they built the system from the ground up in order to capture the nuances of the source material. It has that signature Wings of Glory feel, but it’s certainly a different mutation of machine and blood with its own quirks.

While my enthusiasm for this release was originally “fair”, I’ve spun my nose around and leaned on the throttle. As this system settles and shakes out over time, there’s a real possibility it could prove to be the strongest of its ilk. So say we all.

Have you played Wings of Glory or X-Wing? Let us know in the comments!  And be sure to join host Becca Scott on Game the Game every Thursday here on Geek & Sundry to watch the best boardgames played with fantastic guests!