Now that season two of the Adult Swim animated show Rick And Morty has wrapped up (and we’ve got Allie Goertz’s hilarious concept album on repeat), how are we going to get our fix of our favorite drunken dimension-hopping professor and his wacky adventures with his anxious grandson?

Well, Pocket Mortys is now available (for iOS and Android)! You play as the titular scientist Rick whom must battle and train his Morty (along with various Mortys from the multiverse-including but not limited to: Wizard Morty, Cronenberg Morty, Hipster Morty, and more) against various aliens’ and other Ricks’ Mortys earning badges in order to face off against the Council Of Ricks whom confiscated his portal gun at the beginning of the game for crimes he (probably) didn’t commit.

While Pocket Mortys is very open about being a riff on Pokémon (ie. Pocket Mortys Morty), its overworld design is much simpler, acting more like a hub to then go off and battle in random dungeons. You grind in these dungeons leveling up your Mortys, collecting random ephemera to craft better and weirder items, catching wild Mortys to add to your party, and then earn badges in order to battle progressively council members.

Rinse, repeat, and wubba lubba dub dub. It’s a treacherous road navigating the multiverse and in order to give your Mortys the greatest shot at glory here are a few practical tips for getting ahead of the competition!

1. Don’t be afraid to spend your schmeckles
There are already plenty of recipe guides out there when it comes to crafting all the items in Pocket Mortys, but at the beginning there’s not much you can do with a couple of cables and bacteria cells. While you’re crafting the perfect Morty Manipulator Chip (that’s a tin can + a supercharged battery + a circuit board), use your schmeckles (aka money) you earn from defeating enemies on items to help you survive dungeons. Speaking of items…

2. Stock up Plutonic Rocks
Attack Power (AP) is the amount of times you can use a particular move and if you have a smaller party of Mortys right in the beginning you are in danger of running out of attacks before you’re even halfway through the dungeon! Plutonic rocks can be used to restore AP to your Mortys and keep them battling, but you can’t always rely on them floating around or getting all the necessary parts to craft them.

3. Moves that affect stats are pointless – at first.
Maybe I’m just not a math person (or uninterested in the metagame), but it feels like attacks that raise defense, lower accuracy, and so on don’t really help in the grand scheme of things in Pocket Mortys. Their attack system is so simple that most battles are over after three or four turns at most (in the beginning). Where the attacks begin to mean something is when you pay attention to what element they are.

4. Learn what kind of Morty it is ahead of time
Pocket Mortys gives you the advantage over Pokémon because you can visibly see what kinds of Mortys your opponents are about to throw your way. Like Pokémon, all Mortys have an element, but in this case, it’s broken into a simple rock-paper-scissors motif. Easy to remember right? Each adorably cute and freaky Morty is lined up behind the other Ricks or aliens and this allows you a moment to pause, go to your party page, and swap your Mortys around to give you the best chance of ending the battle before it even starts. Flargo’s got an Exo-Alpha Morty that is a scissors type? Then throw Hammerhead Morty (a rock type) up front to double the pain!

5. Level Up More Than You Need Too
The Council Of Ricks are a progressively tougher bunch and you don’t want to get caught with your Mortys on the losing end. Sure, you can advance to these epic battles the moment you get the right amount of badges. If you want to embody the cocky, belligerent spirit of Rick, you better be prepared to be ruthless. Level up enough so that you can conquer every enemy that comes your way, schwifty style. 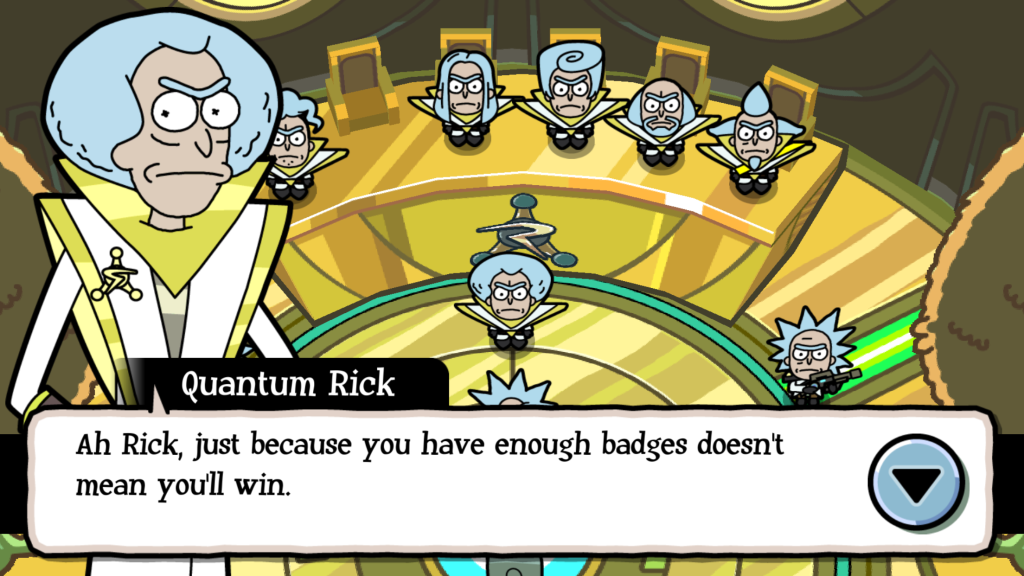 Tell us if you’re playing Pocket Mortys! Which Mortys are in your party? Please share your own tips and strategies with everyone below!