They’ve arrived! The first critical reactions to Marvel’s upcoming film Eternals are making their way through cyberspace. The results? Some overwhelming praise for the latest MCU outing. Almost every critic had something effusively positive to say about the cinematography of Eternals. It sounds like fans can eagerly anticipate a beautiful film. They can look forward to a movie that offers an even more epic scale than before. The cast also received universal praise. Critics cheered the actors for the life they brought to their characters and their, let’s face it, sky-high hotness quotient. 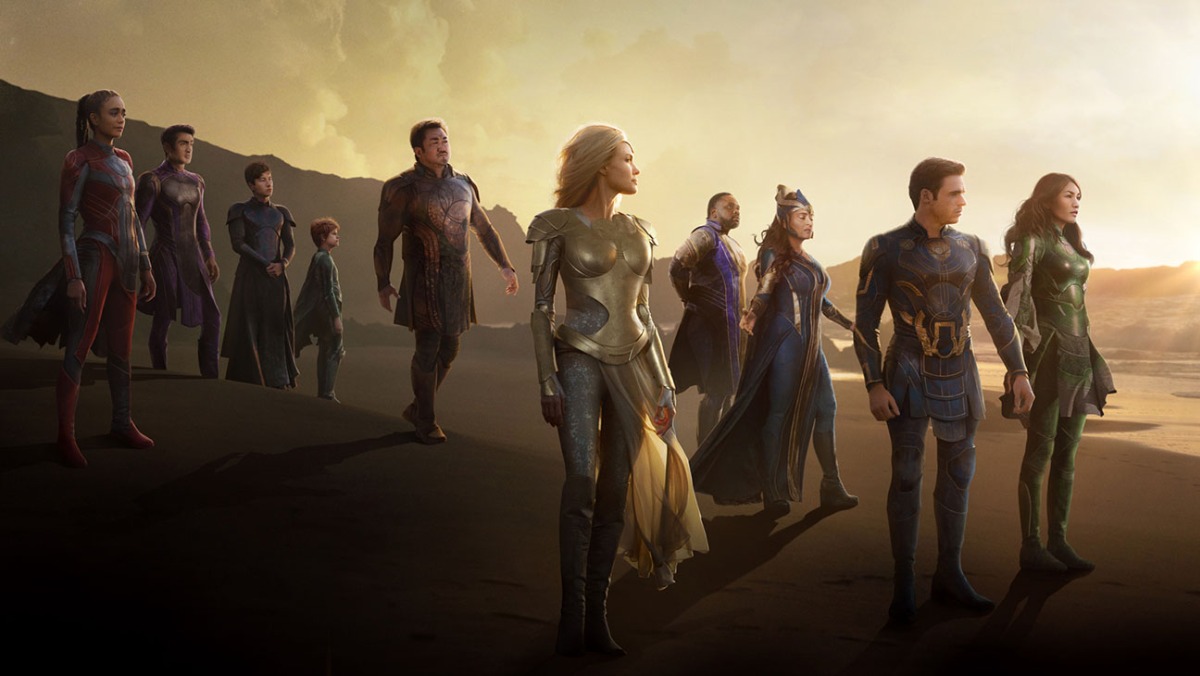 But beautiful scenes and beautiful people are a movie-making must these days. Does all of this translate into a good story? Let’s see what the critics had to say. Before you read on, please note that a possibility of light spoilers exists. Tread carefully.

First up, our team certainly loved the film. Nerdist‘s Dan Casey shared that Eternals was ambitious, lavish, and unapologetic about its scope. The story may not appeal to everyone, but unique stories never do.

#Eternals is one of Marvel’s most ambitious films. Epic in scope, lavishly shot, and totally unapologetic about how much lore it dumps on you.

Terrific cast, great direction, and delightfully comic book-y. Def not for everyone, but these are Jack Kirby’s space gods done right. pic.twitter.com/fsuexvcTwY

Our own Hector Navarro also noted that he felt this movie did the comics justice. And further that Eternals encouraged viewers to really consider the characters and their emotional journeys.

I fell in love with #Eternals tonight.

It's a beautiful translation of the original Jack Kirby comic concepts and it lets us sit with characters and their emotions maybe more than any other MCU film.

It's truly epic. It's really gorgeous. Its trailers haven't done it justice. pic.twitter.com/OpyXaBM6sa

Rachel Heine agreed with Casey’s notion that the movie had a lot to say. She shared that perhaps it even had (just a smidge) too much to say. But Heine felt that once Eternals got going, it found its stride.

#Eternals is a lil overstuffed but once it gets going it’s a ton of fun. @kumailn absolutely steals the show but all the characters were the highlight for me. pic.twitter.com/03vZyE1hyC

Heine also made this valid point.

Overall, a theme of “new” and “different” was evident among the critics’ Eternals reactions. There’s a distinct sentiment shared that the movie offers a novel direction for the MCU. That it’s laying the groundwork for a whole evolved segment of the universe. Chloé Zhao’s distinct style and unique perspective receive much of the credit.

#Eternals is a BOLD direction for Marvel as they embrace the maturity of their universe. While I did find some parts slow, the films scale is something to behold. Ensemble action sequences like you’ve never seen before.

Watch it in @IMAX

#Eternals is the most different entry in the MCU filmography. The film focuses more on relationships between the characters rather than action scenes which is refreshing. Chloe Zhao’s vision and style really comes through.

Felt quite different than where we’ve been — almost forgot we were in the MCU at times.

Pleased every character has such a chance to shine.

Just got out of #Eternals. I've never been so invested in a story. It was cinematically beautiful. I was engaged the entire time. There's a lot to ingest but they do such a great job to process it all. This feels so different from the MCU, like it's own universe. I loved it.

But, for some, this fresh take wasn’t allowed to shine fully. While the scale felt epic and cosmic, the movie didn’t entirely run with the seeds it sowed. Though the movie wanted to take off, it seemed held back.

ETERNALS: in style & tone this is easily the least Marvel-like movie in the MCU (it doesn't look like plastic. also, sex happens) & the scale is cosmic in a way that makes the avengers arc feel like a blip. so why is it still just misfit spandex people fighting bad CG for 3 hours

Speaking of fresh directions, the question of inclusivity and representation is always on our minds during big releases. Of course, Eternals did an incredible job in its hiring choices, both behind the scenes and on-screen. But something critics haven’t discussed too much in their reports is whether the film developed characters to match. Eternals draws mythological inspiration from cultures across the world. The film presents an incredible opportunity to respect, highlight, and celebrate various cultural traditions. Hopefully, within Eternals’ dense storytelling, more than one moment exists to highlight these foundational stories.

Something we did hear a little about was the LGBTQ+ representation in the film. One critic reports that the representation felt solid. Certainly an exciting piece of news. However, at the time of this writing, only one half of the queer couple in Eternals has an official character name. So we hope Eternals’ representation does indeed go further than Marvel’s previous attempts at LGBTQ+ representation. And that both characters exist as fleshed out and fully realized parts of the story.

Okay wow... I'm going to make another tweet but #Eternals is A LOT.

Without exaggeration it is the most plot heavy mcu film and it definitely *feels* like the longest. What I will say now is:

- Legit LGBTQ rep
- Legit sexual tension
- Does not feel like it's on autopilot https://t.co/FY8b2gIb9m

One thing there was no question about was that Eternals visuals absolutely stunned. The movie felt grand on a universal scale.

#Eternals was one of my most anitcapted movies of the year and I’m happy to report that it did not disappoint at all. Chloé Zhao takes you on a thrilling and emotional journey. The visuals are incredible and the cast absolutely kills it. The cosmic side of the MCU is expanding🔥 pic.twitter.com/fvqOtuAuxb

Had the honor of watching #Eternals today. Marvel was never as thrilling and fun and deep as this film, that has one of the action scenes of the entire franchise. Angelina Jolie might be the MVP. Her performance would give her an Oscar, if the Academy was less conservative.👇 pic.twitter.com/JMUYztquIr

However, though nearly everyone gives the movie its due in this arena, others thought the dazzle wasn’t enough to battle an uneven tone and expository missteps.

Aside from a few dazzling moments & a wonderfully diverse cast, ETERNALS disappointed me. The story is an expository convoluted mess as it jumps through time & multiple continents with an uneven tone. Ramin Djawadi’s score soars but Chloé Zhao’s distinctive style is sadly absent. pic.twitter.com/OXcTw2OYJr

Overall, these two tweets seem to sum up the critical experience and reaction to Eternals. Everyone had a good time, at least on some level. However, some felt that good time was more surface-level, while others felt the film resonated like no other.

The Marvel fandom is going to break once #Eternals hits theaters.

Soon, everyone can draw their own conclusions. Eternals releases on November 5.