FIRST DATE Is the Best Caper Flick in Forever - Nerdist

FIRST DATE Is the Best Caper Flick in Forever

The “One Crazy Night” set-up is one of the most tried and true in cinema. From the urtext of Martin Scorsese’s After Hours to Richard Linklater’s Dazed and Confused, the narrative of a night that spins out of control is a very fun one. The Sundance 2021 press notes for First Date describe it as “Superbad meets True Romance,” which is definitely an eye-grabbing prospect. While the set-up of a high schooler getting in scrape after scrape in his attempt to pick up his dream girl for their date has an Apatow tinge, it’s much more Tarantino. And that’s absolutely to its benefit.

Nights can’t spin much further out of control than they do in First Date. To counterbalance, writer-directors Manuel Crosby and Darren Knapp make sure the central romantic pair are the heart of the film. We don’t just want those two crazy kids to make it; we want them to make it out alive. Which becomes increasingly difficult when seemingly everyone they come across is a criminal in some fashion. 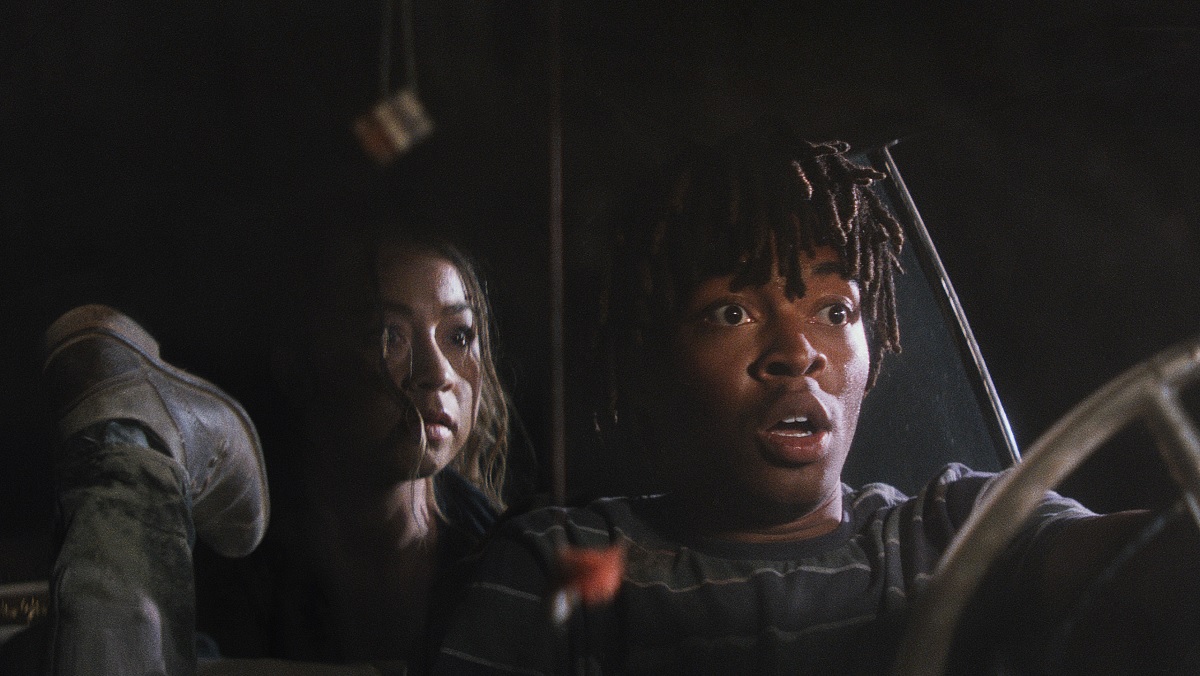 Our hapless young dude is Mike (Tyson Brown), a high school dork with a crush on his neighbor/classmate Kelsey (Shelby Duclos). She’s funny, smart, and a kickboxer; the whole bundle. In a rather charming fumbled attempt to ask her out, Kelsey ends up asking Mike out. “Pick me up at 7,” she says. The only problem is, Mike’s parents are heading out of town with the family’s only car. So Mike, with urging from his very weird friend Brett (Josh Fesler), decides to go buy a car with his college fund money. Famously silly idea.

The car is not the car advertised, and the guy selling it (Scott E. Noble) is for sure up to some criminal shenanigans. But Mike needs the car! So he buys the junker, and almost immediately the police pull him over. The two cops, Davis (Nicole Berry) and Duchovny (Samuel Ademola), end up recurring throughout the weird night, which just gets weirder when a book club of bumbling criminals (yes, really) try to steal Mike’s newly purchased car. Seems there’s something in the car that everyone in town is after. Scariest of all might be the book club’s leader, the Captain (Jesse Janzen), who is ready to kill just about anyone to get the goods.

While we’ve obviously seen this kind of zany caper movie before, First Date stands with the greats for a few reasons. First is just how adeptly Crosby and Knapp straddle the line between violent crime movie and cute teen comedy. The scenes of tension are incredibly tense, which makes the laugh moments hit all that much harder. The second is just how incredibly likable Brown is as a lead character; the quintessential good good guy. And the movie isn’t just about Mike chasing the girl; Kelsey wants to go out with Mike just as much, which drives the stakes up even further. Duclos gives Kelsey an assurance and savvy that feels real and earned, not just a movie giving us “the cool chick.”

First Date offers up some genuine laughs and twists that I truthfully didn’t see coming which is always a plus. Well made, smart script, fantastic performances, and not a star name in the bunch; this is a great, fun movie that I hope finds an audience as soon as possible.