AQUAMAN Reviews Call the Movie Crazy, Visually Stunning, and Possibly "Too Much" - Nerdist

AQUAMAN Reviews Call the Movie Crazy, Visually Stunning, and Possibly “Too Much”

It’s been over a year since the release ofÂ Justice League, the most glowing reactions to which essentiallyÂ amounted to “It’s fine!” Not exactly a ringing endorsement, nor was much of what we heard in the wake ofÂ Batman V Superman: Dawn of Justice. But the likes ofÂ  Wonder WomanÂ and nowÂ  AquamanÂ seem to beÂ incremental improvements on the DC Comics franchise. In fact, word has it that director James Wan’sÂ superhero film is an epic story with amazing visuals that will have audience members screaming “My man!” Then again, some think it might go a bit too far. But let’s see exactly what the critics have to say! Nerdist‘s own Rosie Knight has high praise for the Shakespearean family drama that looks unlike anything else we’ve seen from the DCEU.

“Thanks to Wanâ€™s dextrous directionâ€“keep an eye out for moments in which he flexes his horror chopsâ€“Aquamanâ€™s genre straddling sets it apart from its superhero cohort. Wan weaves comedy, sci-fi, high fantasy, and action into something that constantly surprises. Jam-packed with brilliant action, spectacular visuals, and likable characters, Aquaman is never afraid to have fun, which makes it a bright spark in 2018.” 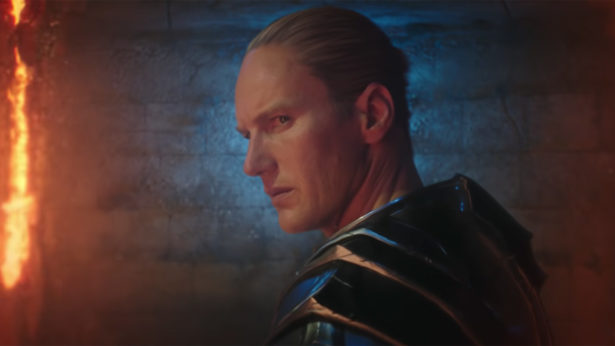 Karen Han writes at Polygon that the movie is packed with visual delights and spectacles that are so good its flaws don’t matter.

“The movie has everything: giant seahorses, lasers, de-aged Willem Dafoe, a Lisa Frank color scheme, more lasers, an Indiana Jones temple raid, Julie Andrews, an octopus playing the drums, even more lasers, and my undivided attention for two and a half hours. Every second is overflowing â€” and thank goodness for that.”

Collider’s Vinny Mancuso thinks the plot is a “hot, foamy mess,” but it didn’t matter since the movie was too insane not to love.

“A screenplay is a weird, ever-changing thing, but in its earliest stages is often filled with the writerâ€™s wildest, most fantastical ideas dreamt up with no thoughts given to budget restrictions, scenes that usually get struck from the finished product for being too complex, too ambitious, too time-consuming, or simply too expensive. I mention this only because I just experienced Aquaman, quite possibly the first major release film Iâ€™ve ever seen that felt like not a single idea from the conception phase was vetoed for being too insane or over-the-top. Yes, an octopus will play the drums. Yes, Julie Andrews will voice a Lovecraftian sea beast who lives at the Earthâ€™s core. Yes, there will be crab people, yes, there will be gargantuan shrimp used as war machines, yes, we will ask audiences to believe that Patrick Wilson is Jason Momoaâ€˜s younger brother. Yes, to every single idea that might entertain the audience over Aquamanâ€˜s genuinely batshit two-hour-plus runtime. 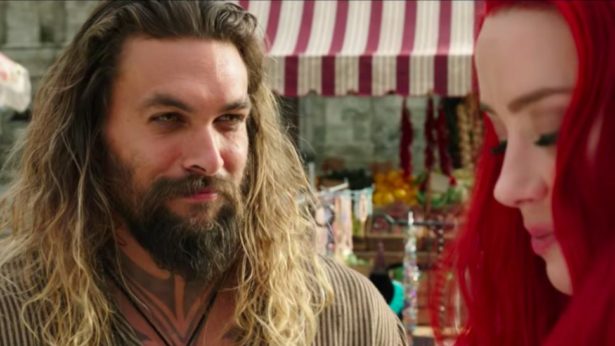 Hoai-Tran Bui at SlashFilm has high praise for Jason Momoa who captures the film’s fun and crazy tone, even if the rest of the cast doesn’t always get to match his performance.

“If you hadnâ€™t already been taken with Momoaâ€™s Aquaman in Justice League, you will be after Aquaman. Momoa delivers the kind of hammy performance that shows a supreme self-confidence â€” or just suggests that he is having a ball. His jovial attitude is infectious, spilling out through the screen and daring you not to crack a smile when he cheekily delivers lines like, â€œPermission to come aboard?â€ Sadly his infectious attitude doesnâ€™t extend to the majority of the cast, who are given the task of playing straight men to Momoaâ€™s hotheaded fighter.”

At IGN, Jim Vejvoda praises the film for understanding its own premise and embracing it.

“Aquamanâ€™s greatest superpower isnâ€™t controlling the seas or communicating with fish â€“ itâ€™s the ability to embrace and absorb his own inherent cheesiness and use it to make himself more entertaining to watch. His first solo movie is often corny, but it owns all that with the audacity and fearlessness to just go for it. This James Wan-directed DC film declares to the world that this is a giant B-movie where krakens are voiced by screen legends and characters ride seahorses into battle, and itâ€™s not going to pause to let you dwell on any of that. Itâ€™s precisely because itâ€™s so damn zany, unafraid to embrace its comic bookiness, and is just plain out there that Aquaman is a blast.”

Not everyone loved the film though. At Entertainment Weekly, Chris Nashawaty wrote he was bored by a movie that never decided what it wanted to be.

“There was never a question that at this stage in Hollywoodâ€™s comic-book economy that every superhero would eventually get his or her own standalone blockbuster. Even Aquaman. But Wan, a director whoâ€™s proven himself to be a canâ€™t-miss ace regardless of genre (from the horror formulas of The Conjuring and Insidious to the big-budget tentpole mayhem of Furious 7) seems to finally be out of his depth. Heâ€™s conjured an intriguing world, but populated that world with dramatic cotton candy and silly characters, including a hero whoâ€™s unsure if he wants to make us laugh or feel â€” and winds up doing neither. Pass the Dramamine.”

Variety‘s Peter Debruge also found the movie overstuffed, requiring audiences to wait a long time for any payoff.“Aquaman isnâ€™t like the other DC Comics superheroes, so it seems only right that his bigscreen solo show should have a personality all its own â€” which, in the hands of â€œFurious 7â€ director James Wan, it does. Gone is the Aryan-looking Atlantean in green-and-orange spandex, replaced with a bare-chested Hawaiian super-stud with long, shaggy surfer hair and all-over tribal tattoos. After being unveiled to the DC Comics Extended Universe as the scales of â€œJustice Leagueâ€ last year, Aquaman gets his own adventure, and itâ€™s kind of a shock that it doesnâ€™t suck, but only if youâ€™re willing to sit through two hours of water-logged world-building before the movie finally takes off.”

Alex Abad-Santos at Vox had fun watching it, but also said it tried to cram too many elements into a single film.

“Carried by Momoaâ€™s natural charisma, the movieâ€™s underwater charm offensive does a lot to smooth over its ill-advised attempt to cram way too much into one movie â€” even if it still stumbles while trying to juggle mythbuilding, romance, adventure, world travel, death, betrayal, riddles and puzzles, father-son bonding, Greek mythology, Julie Andrews as a Kraken-like creature, and multiple villains (including Julie Andrews as a Kraken-like creature).Itâ€™s as if someone told Wan and team that Aquaman would be the title characterâ€™s one and only shot at a solo movie, and they made sure to go for broke.”

Ultimately, though, how you feel about the movie could depend on what you wanted from it, according to Todd McCarthy at THR.

“There is scarcely a scene in Aquaman that couldn’t have benefited from the fun sense of wit and surprise that Momoa delivers more or less on his own. Kidman supplies short-lived warmth and gravitas as Aquaman’s mum, while Yahya Abdul-Mateen II has a side role as a vengeance-minded fighter. Technically, the film is everything its fan base wants and expects, and the underwater setting imparts a sometimes enchanted feel that at least distinguishes it from most other superhero epics.”

Strong opinions on both sides, but at least they weren’t “meh” like with Justice League, and unlike BvS we can at least print them.