Fight a Motorized Dragon and Save the Princess in Dragon Tower

Dragon Tower is one of those games you just sit and stare at. Brought to us by German publisher HABA games, this physically massive design boasts a tall three-dimensional tower holding a terrified princess and beset by a malicious wyrm. Steel your nerves and confront the beast to rescue the captive in need – we’ve seen this story before but we haven’t seen this game.

This design is a hoot. It’s a cooperative affair where multiple players join together to complete the rescue across two phases. The first portion of play involves a memory element where you take turns flipping tiles face-up in a grid. You’re looking for companions and villagers of specific colors to build up a rickety series of platforms adjacent to the tower. This wobbly structure is a number of levels supported by cardboard standees and functions as a ladder of sorts to get the princess out of dodge. 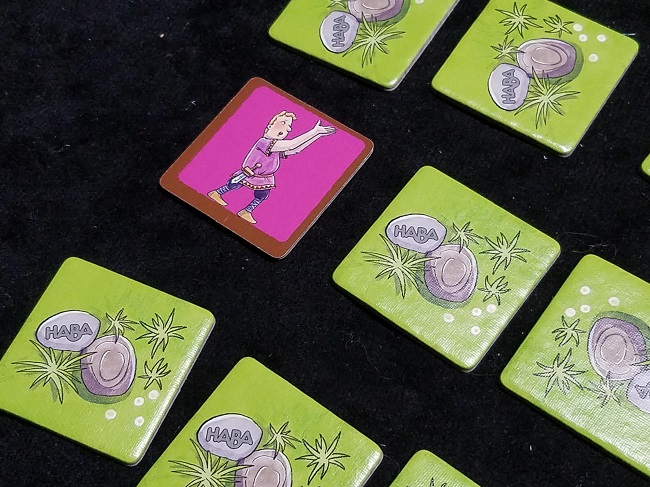 The early game is pretty simple. Danger rears its head with dragon tiles that work to inflame the tension of the latter half. This is where things get interesting and the burly motorized dragon enters play. Yeah, there’s a big plastic miniature lizard. With a motor.

When setting up the game you take this dragon and place it on the path leading away from the tower. There’s a plastic boulder attached to the fire lizard by thick string, and you pull the rock away from the beast as far as it will stretch. This creates a foot or so of rope between the two at the start of the rescue mission.

Each time a dragon tile is flipped in the first phase the beast moves backwards one space on the road. Meanwhile, the boulder sits quietly next to the tower, supporting your structure that arches towards the sky and the bedeviled princess. As the dragon inches away from the conjoined towers the slack in the extended rope shortens – as does your chances of survival. It’s a wonderful visual cue of your impending calamity and creates a pall hanging heavily over the table.

As a game, the memory mechanism is extremely simple. You don’t even need to match pairs and the ability to recall what was previously flipped only really comes into play when you don’t need a particular color villager now, but will later. 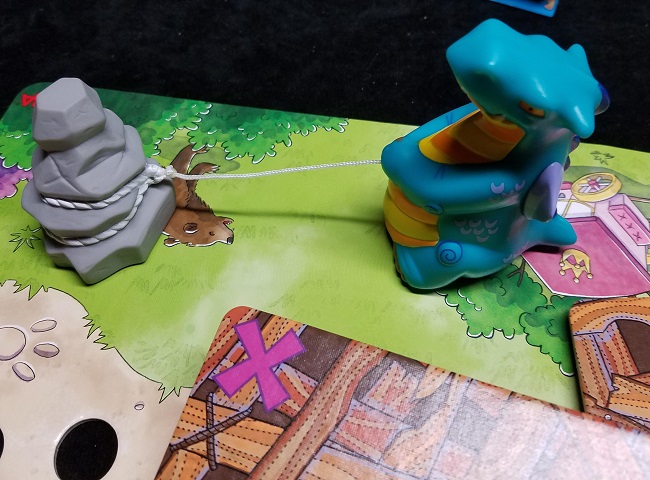 The motorized contraption is engaged in the second and more provocative portion of the experience. Once you’ve built the tower, each player takes up a cardboard stick depicting the prince or one of his loyal knights. Everyone nervously hovers over the board, huddled in hushed silence like Indiana ready to gank an idol. Then someone engages the dragon’s wing and the little cretin starts pulling in the rope.

Then the poo hits the fan.

The group must cooperate to guide the princess out of the tower using their sticks. You push and prod the pink meeple out of the top room and along a narrow ledge surrounding the keep. Then she must make her way down your ramshackle belfry by falling through a hole on each level. With frantic eloquence you’re shoving your wand into the gaps on the level and trying not to displace one of the heroes holding the precarious platform intact. Hearts flutter and faces contort in anguish as time runs out and the dragon pulls the boulder to its clutches. The entire player-built structure collapses and the poor royal gentlewoman is crushed under the weight of your feeble rescue.

And your child loves it. “Again!” they demand with “no” being an unacceptable answer. Everything gets separated and you start your journey afresh, and perhaps this time a dozen or so would-be-rescuers don’t perish alongside a lady who was probably better off rescuing herself.

There’s an undeniable charm and physicality at play here that elevates the experience. It has an element of performance as it wows you with visuals and offers a hefty toy to play with. The second half of play is far more interesting than the first, but it can also be frustrating for those not nimble of finger. What’s wonderful, however, is how everyone comes together to support each other as we all work to move a little oddly shaped pink pawn through a series of treacherous conditions.

You haven’t played a game quite like Dragon Tower and that’s perhaps its strongest selling point. It’s the type of experience your entire family will not soon forget. Whether you achieve victory or defeat, it provides powerful moments of exhilaration and anguish as you look across the charred remains and marvel at the chaos.

What are your favorite family games? Let us know in the comments!  And be sure to join host Becca Scott on  Game the Game every Thursday here on Geek & Sundry to watch the best boardgames played with fantastic guests!