Facebook Says It Tracks Users Who Have Location Tracking Disabled

Back in September of this year, Facebook proactively posted a note on its blog regarding how the app would change in response to location tracking changes made to iOS 13 and Android 10—the operating systems used for Apple devices and devices that utilize the Android OS. The brief post outlined how Facebook would now track users’ locations, but was too ambiguous according to two U.S. senators, who subsequently asked for clarification from the tech giant. Now, Facebook has delivered that clarification in a letter responding to the senators’ inquiry, and it turns out that Facebook tracks users’ even when they have location tracking turned off.

anyone want a granular accounting of how Facebook knows your location

well here you go anyways and there’s 5 more pages where that came from pic.twitter.com/tzaSQ2mU6H

The letter, which comes via CNBC, was posted to twitter by multiple tech reporters, although The Hill’s Emily Birnbaum was the only one we could find who posted it in full. In the letter addressed to Senator Coons (DE) and Senator Hawley (MO), it’s stated that “Even if someone does not enable Location Services, Facebook may still understand information about their location based on information that they and others provide through their activities and connections on our services.”

“For example,” the letter says, “if someone responds to an event on Facebook for a local music festival, uploads a location-tagged post, or gets tagged by a friend in a checkin-in at a restaurant, these actions would give us information about that person’s likely location. Similarly, a person might share where they live by setting a location in Marketplace or adding their address to their profile.” The letter goes on to note that there are other ways Facebook can approximate a user’s location even when location tracking is disabled, including through their IP address.

and the next four pic.twitter.com/B7jrbed9Hl

As one would guess, one of the main reasons Facebook continues to collect location data on a user even after they’ve disabled location tracking is because the company still wants to deliver targeted ads. The letter notes that “by necessity, virtually all ads on Facebook are shown based on the general location—for example, city—where we estimate a person may be located.” It adds that “While we provide controls over whether Facebook collects precise location information, we don’t offer the option to turn off ads based on location.”

But Facebook says in the letter that keeping track of a user’s approximate location even when they have location tracking turned off also helps other, more critical services to function properly. The letter notes that approximate location tracking can help users to “search for things nearby,” share their location with their friends, help with the Safety Check feature in the case of emergencies, and detect suspicious activity—e.g. if a user is located in say, Washington D.C. and somebody tries to log into their account from London, Facebook can message the user to verify that the login is authentic. 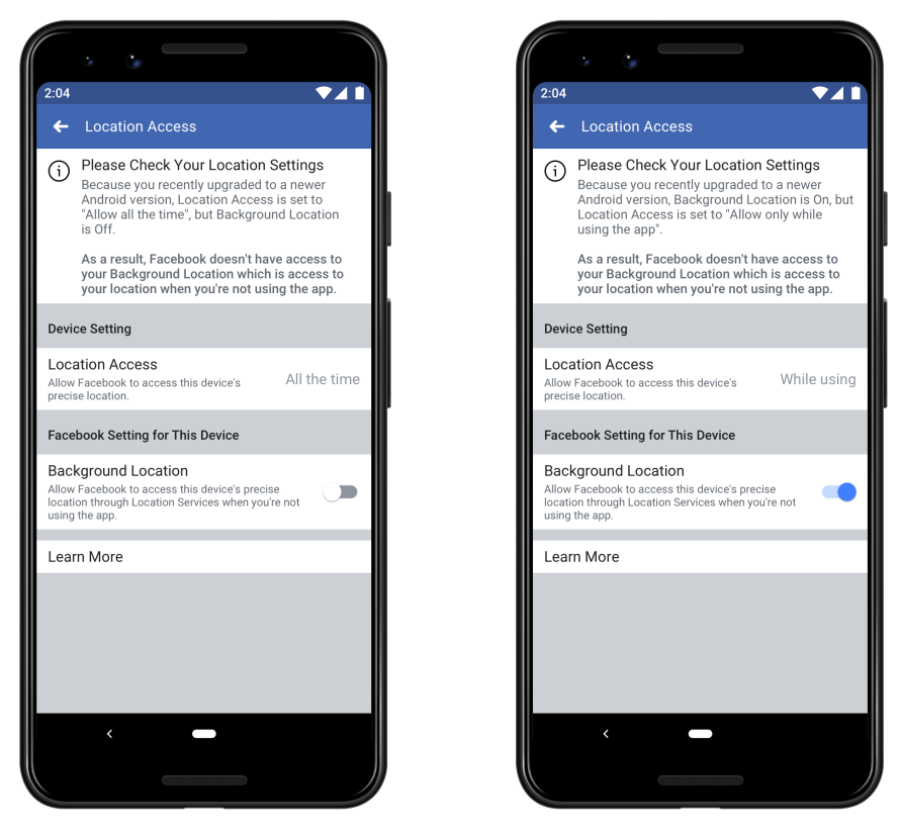 Despite the fact that Facebook says it only approximates a user’s location when they have location tracking services disabled, it does note that there are exceptions when it will determine “a more granular location” as “in the case of imminent risk of suicide,” or “to counter attackers attempting to compromise the security of [Facebook’s] services.”

A cursory glance at Senator Coons’ twitter account reveals no response to Facebook’s letter (although he may have responded elsewhere), but Senator Hawley did post a tweet saying that “[Facebook] admits it. Turn off ‘location services’ and they’ll STILL track your location to make money (by sending you ads).” He added that “There is no opting out. No control over your personal information. That’s Big Tech. And that’s why Congress needs to take action[.]”

. @Facebook admits it. Turn off “location services” and they’ll STILL track your location to make money (by sending you ads). There is no opting out. No control over your personal information. That’s Big Tech. And that’s why Congress needs to take action https://t.co/R1LuLcP1LP