The rattling at the stout door pulls you from the throes of aching slumber and back into the brutal now. You can’t help but sit baffled as the egress to your cell lies clear, beckoning into the dark passageway.

You waste no time grabbing a suspiciously discarded flail and bounding around the corner. The smell arrives before the collision, a large hellish thing stumbling towards you with oozing limbs and bent claws outstretched. Closing your eyes, you pivot and bring the spiked head of your weapon around in a wide arc. It smashes into the beast’s crooked shoulder. Black spray coats your face and wets your hair. You wish this was all a dream. This nightmare is just beginning.

Escape the Dark Castle is a game of atmosphere. It’s an RPG-like cooperative adventure game that hits hard and fast in a bloody quarter-hour. It will draw your gaze with fiendish style and keep you coming back for more with engaging play. Originally funded on Kickstarter and published by Themeborne Games,  this indie design channels the retro feel while packing a lot of punch.

Those seeking puzzle-based challenges or sophisticated mechanisms to untangle in cognitive workout need avert their gaze. This is a title that’s all about presenting a simple framework to deliver gripping narrative as it shoves you through a gauntlet of spikes and fire. 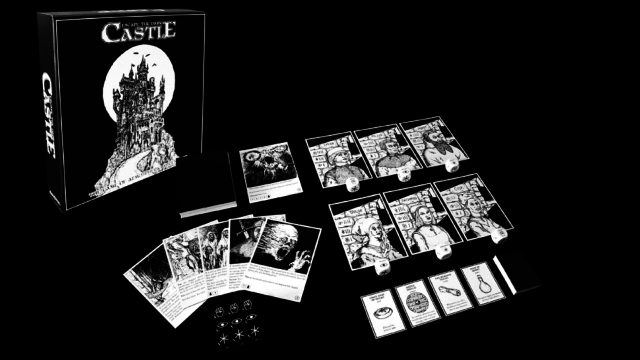 Participants each grab a character card and their asymmetrical die. You’re not a badass elf slinging fireballs or a hellacious barbarian who collects heads from the fallen, no; you’re a cook or an abbot or maybe even a tailor. Mom and dad would be proud of you for choosing simple and reliable careers when all the other kids were heading off to fritter their lives away in the darkest of dungeons.

But something happened. Maybe you undercooked the demon-prince’s side of human flank. Or perhaps you left a button off the evil sorcerer’s pantaloons. It doesn’t matter now because you’re rotting in a cell and sucking on your thumb for eternity. Or at least, that was the case until the game begins properly and you’ve initiated your daring escape. Now you’re going to run through a fun-house of monstrosities that will have your teeth chattering and piss running down your leg. The barbarian life doesn’t look so bad now, eh?

To escape Castle Grayskull you’ll build a deck of 15 random challenges from a larger collection of 45. Variety is strong between plays and you’ll never know exactly what you’re going to run into.

The top card is flipped and a challenge is presented. If you’re lucky it’s a seedy human being trying to sell you spit in a jar and pass it off as a cure-all for your open sores. If you’re unlucky it’s an army of skeletons or an infected ghoul lurching from the darkness.

Some encounters will prompt choose-your-adventure-style decisions, many require die rolls. Combat consists of building a pool of dice with both random and specific symbols representing the threat of your attacker. Players spend rounds rolling their single die and then removing opposing symbols matching what they’ve rolled. It’s damn simple.

This is a resource management game at heart where you’re trying to minimize damage and hang on until the bitter end. If you hit the final boss with a few items intact and at least one limb remaining, you might have a shot. Maybe.

Escape the Dark Castle has no business being as enjoyable as it is. There’s very little going on mechanically but it all comes together so well to produce an experience. 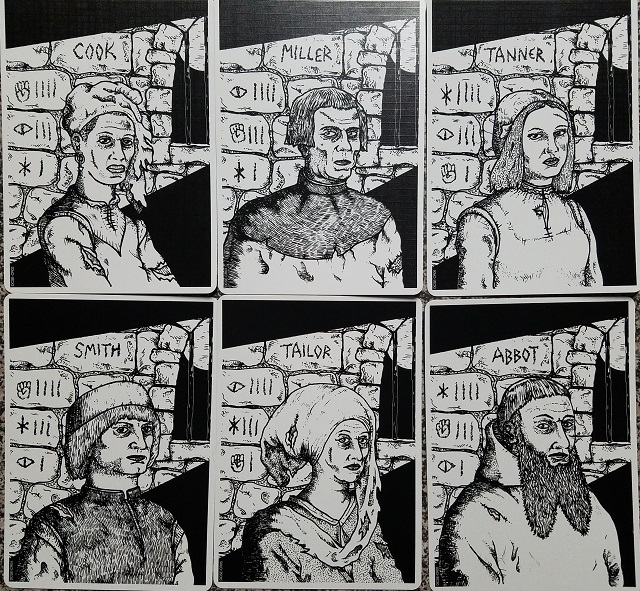 The challenge with a short 15-minute game is in providing a hook. These designs are typically called ‘filler’ and they struggle to produce meaningful occurrences. This design overcomes those challenges with a number of clever twists.

First, that graphic presentation is absolutely stellar. It’s a dark, black and white visual design that hearkens to heavy metal and classic horror. It’s evocative and it pulls you in. Then it utilizes that setting expertly with its snippets of story and impassioned illustrations placed at the center of these enormous cards. A gripping context is provided to each encounter and it works wonders to obfuscate any possible shortcomings.

And of course, there are a few of those pesky niggles. Most are matters of design choice as opposed to unintended flaws. By placing a sense of accessibility as a primary creative goal, the game homogenizes characters in a slightly disappointing way. The inclusion of a special ability, for instance, would have added a touch of individualized flavor beyond the unique spread of die faces.

Additionally, the experience is at its best when you’re stumbling through the stone passageways and astonished with surprise. These embers fade slightly over time as cards become more familiar and that edge wears off just a little. The system compensates for this somewhat as the timing of encounters often produces different tactical considerations. For instance, running into the cheeky trapped treasure chest presents a different risk assessment if you’re fresh off the boat than it does after you’ve tussled with a wolf and traded blows with an indignant beggar. 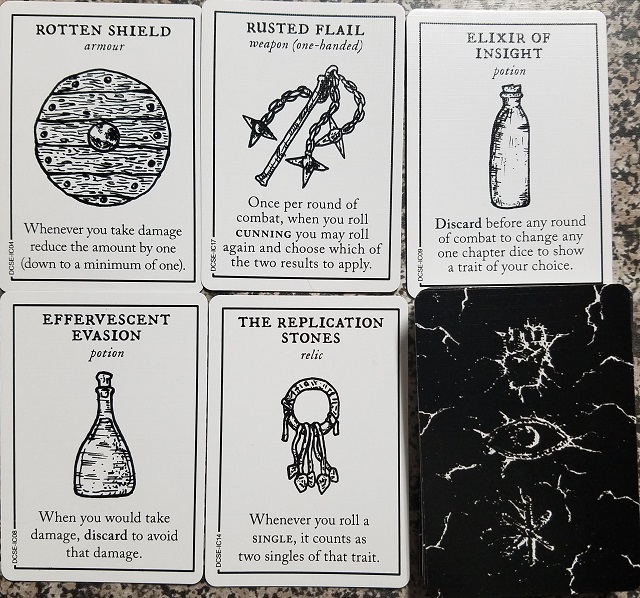 One of the unheralded qualities present is in how well this game scales with player count. While the decision space is not large, it’s quick and varied enough that it doesn’t feel a slog, even with three or four participants. However, it’s also extremely satisfying as a solo affair where you control two characters. It may even be strongest in this regard as you’re able to rattle off game after game at your convenience.

Escape the Dark Castle is one of those designs that is extremely economical in what it offers, providing an engaging journey into the heart of darkness in a very short period of time and with only a palmful of rules. This is a game that will leap off your shelf and set itself up as you’re enjoying a dark beer, ready to punish you again and again as you attempt escape. There’s nothing left to do but open your arms and let the gloom envelope your body.

Have you played Escape the Dark Castle? Let us know in the comments! Don’t forget to check out into our tabletop show Game the Game hosted by Becca Scott as we play games and talk about what’s happening in the land of tabletop gaming every week here on Geek & Sundry.