Due to the devastating effects of climate change, Earth’s oceans, and its countless inhabitants, are in dire straits. This fact is nowhere more apparent than with sea turtles; nearly every one of the various shelled marine creature species is on the endangered or critically endangered list. To bring attention to this tragedy, as well as promote a “Global Ocean Treaty,” Aardman Studios and Greenpeace have teamed up for an animated short film about a family of displaced sea turtles. And it is heartbreaking.

Aardman Studios and Greenpeace’s short film, Turtle Journey: the crisis in our oceans.

Polygon picked up on the short film, titled Turtle Journey: the crisis in our oceans, which was recently posted to the Greenpeace UK YouTube channel. Turtle Journey features the classic stop-motion clay animation technique that’s characteristic of Aardman’s films—the studio’s responsible for Wallace and Gromit and Chicken Run, among others—and has a cast of actors that includes Olivia Colman, Jim Carter, Giovanna Lancellotti, David Harbour, Helen Mirren, Bella Ramsey and Ahir Shah. At less than two minutes, the short film doesn’t assemble a full narrative like some others do.  However, it still manages to deliver its shockingly sad point in a very poignant way. 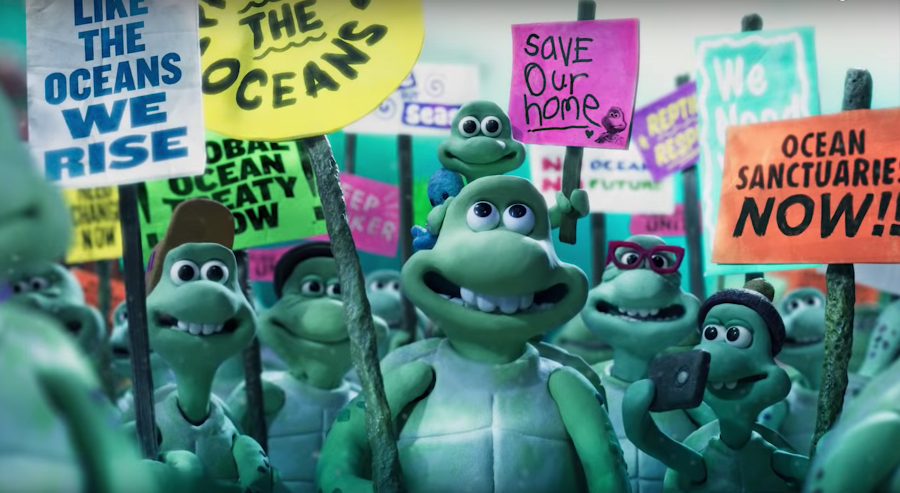 The characters from Turtle Journey calling for ocean sanctuaries.

According to the film, six out of seven of Earth’s sea turtle species are “threatened with extinction,” a claim that’s supported by information available on the World Wildlife Fund’s website. Greenpeace’s website notes that this danger of extinction is due to everything from fishing nets to oil spills to plastic pollution, and says that “the threats facing turtles and other sea creatures are getting worse every day.”

But the short film’s aim isn’t only to sound the alarm on behalf of endangered sea turtles; it was also made in order to call attention to the Global Ocean Treaty, an international agreement that could, according to Greenpeace, “help protect at least 30% of our seas by 2030.” The Global Ocean Treaty, formally referred to as the Biodiversity Beyond National Jurisdiction treaty (BBNJ), is a legally binding treaty currently under consideration by the United Nations. The treaty has apparently been under review for more than a decade, however. Some of its most impactful language is still in negotiation. Oceanographic notes that “This [issue with cementing strong terms] is primarily evident in the lack of clarity over whether governments can collectively set up a management plan for sanctuaries they agree to create in international waters.”

JUST RELEASED: We’ve worked with the creators of Wallace and Gromit to produce a short film about why our oceans need protection.

Anybody who’s been deeply affected by Turtle Journey and is looking for some way to help protect Earth’s oceans can add their name to the list of people calling for Evan Bloom, U.S. State Department Director of Ocean and Polar Affairs, to agree to the Global Ocean Treaty. The final round of U.N. discussions regarding the Global Ocean Treaty will take place in spring of this year.

What do you think about Turtle Journey: the crisis in our oceans? Does this make you want to join the fight to protect our oceans, or did Aquaman do a far better job at persuading you when he referred to humanity as a disease? Give us your thoughts in the comments.