Elvira Is Making Netflix Her Home for Spooky Season - Nerdist

Elvira Is Making Netflix Her Home for Spooky Season

It’s been quite a year for Elvira, Mistress of the Dark. The iconic horror hosting legend just celebrated forty years in the business, her 70th birthday, and released a memoir entitled Yours Cruelly, Elvira. And now she appears to have completed her medical degree. For this year’s “Netflix & Chills” spooky season promotion, the streaming giant has brought “the hostess with the mostest” on board to play “Dr. Elvira.” Every Sunday, she’ll be dropping a new video with her “macabre prescription” of Netflix & Chills. You can watch a teaser for this special Halloween promotion right here:

According to the good doctor, “stress and fear cause restlessness. That means heart-pounding thrillers can combat stress because they elicit a shock response.” We imagine the former Movie Macabre host will give everyone the tea about the Netflix & Chills selection for the year. As part of the month-long festivities, a new horror movie is coming from Netflix every Wednesday. Among these films are There’s Someone Inside Your House, Fever Dream, Night Teeth, and Hypnotic. Elvira is all about classic horror, so she’ll be recommending some of those too. We hope some are deliciously cheesy, in true Elvira fashion. 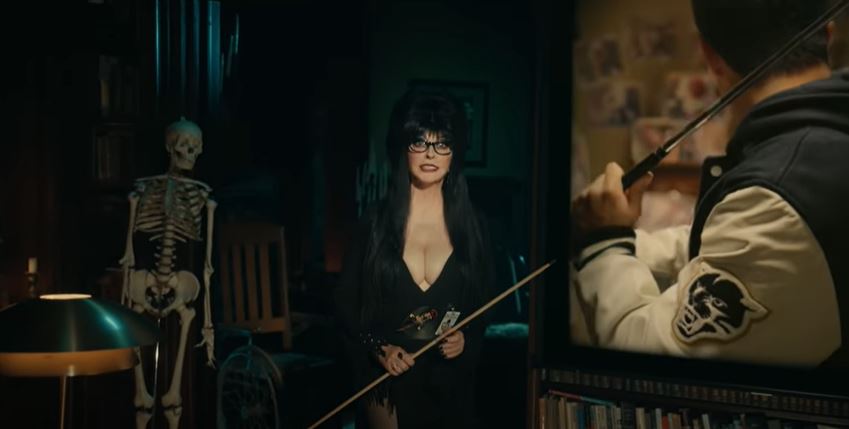 Cassandra Peterson started out as Elvira in 1981, hosting cheesy old horror movies on Los Angeles local station KHJ. They only paid her $300 a week at first. Not long after, she became a fixture at Knott’s Berry Farm’s Halloween Haunt. But soon, her stardom expanded outside of the Southern California area. She’d get a nationwide show, a DC Comics series, and become the Coors Light mascot. By the end of the decade, she starred in her own movie, Elvira, Mistress of the Dark. As her new gig for Netflix proves, there’s one thing that is consistent about Elvira. She’s always known how to adapt to the times.