Chef Makes the Pixar Lamp Out of Cake and Chocolate - Nerdist

Chef Makes the Pixar Lamp Out of Cake and Chocolate

Pixar’s Luxo Jr., the sworn enemy of the letter “I,” has been introducing some of our favorite films for decades. That eager lamp is truly an iconic piece of animated furniture. Now it’s also a delectable dessert thanks to a chef who made a replica lamp as a tall tasty treat.

Pastry chef Amaury Guichon put his most impressive skills into making an electric delight. Electric in the metaphorical sense of course. No one will be zapped if they eat this cake. He calls his creation (which we first came across at Technabob) “the perfect dessert” for any office. It’s based on the same type of Luxo desk lamp that greets us at the start of Pixar movies. Only this one lacks wires and metal. It consists of sesame streusel, a black sesame Japanese roll cake, a crunchy sesame tuile, a sesame praline, and black sesame mousse. Guichon crafted the mechanical elements out of molded chocolate.

And as an added bonus, the edible lightbulb also has some “crunchy caramelized sesame.” Making it the first lightbulb we’d be happy to see burst.

When all carefully pieced together this sweet creation looks like a real working lamp. Of course, by now we should always be on the lookout for secret surprise cake. One thing we’re not looking out for is a tiny rat pulling this chef’s hair. He made his cake without a hat on. This isn’t a Ratatouille situation. There’s no Remy hiding in his kitchen. 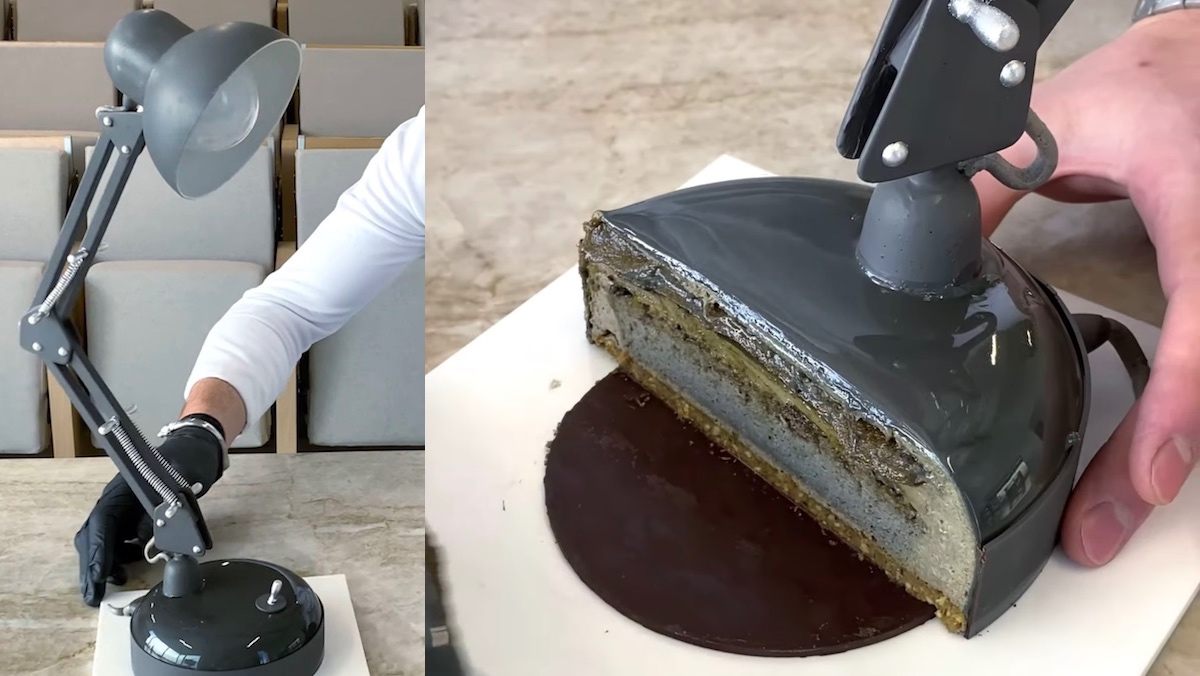 In fact, Chef Guichon can teach you how to make your own desserts if you like. You can learn his “techniques and recipes” by enrolling in one of his long term programs at his pastry academy.

We don’t believe you have to be an electrician to learn how to make this Luxo lamp cake. But it probably won’t hurt to be as enthusiastic in his class as that little lamp is every time a new Pixar movie starts.