New Dunkaroos Are Delicious, But Still Meant for Children - Nerdist

New Dunkaroos Are Delicious, But Still Meant for Children

Update: Look, I’m a monster who will eat just about anything. But if you offered me cookies dipped in icing as a snack even I would recoil. Sure, that sounds amazing, but I’m a grown man who can’t afford new pants with a larger waistline. If I’m eating something that unhealthy and absurd I’m having dessert at a party not as a midday snack. And yet I couldn’t wait to get my hands on General Mills new Dunkaroos. As a ’90s kid they were a staple of kitchen cabinets everywhere. Forget recoiling from this delightful combo like I would by any other name. Just knowing they were coming back made me wonder why I don’t always dip cookies in icing. After eating them I have my answer. Because even though they’re still freaking delicious, they’re also still meant for children. 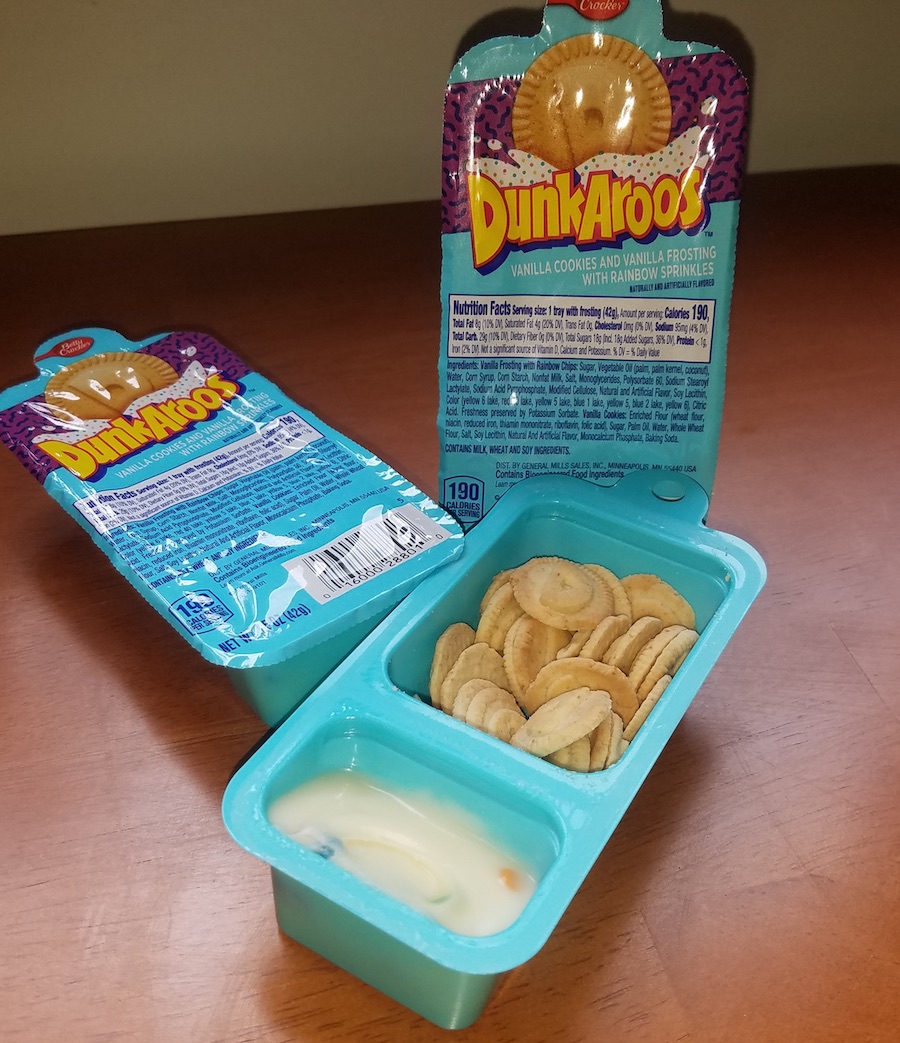 This new version tastes like Dunkaroos. At least how I remember them. The vanilla cookies, which are tasty on their own, are great. So is the very sweet vanilla frosting; it just barely avoids being cloying. That makes one small package plenty. Ultimately it’s exactly what you expect. There aren’t many rainbow sprinkles mixed into the icing, but if you get one they add a tiny little crunch. These Dunkaroos wouldn’t be much different without them.

The only issue is actually eating them. The cookies are little circles with an elevated “D” on top. They are about the size of a quarter, but feel even smaller. I enjoyed putting two of them back-to-back to get a more fulfilling bite. But the container itself is so small that it’s impossible to get icing on them without also getting it on your fingers. This is a treat designed for children, both in terms of taste and utility. 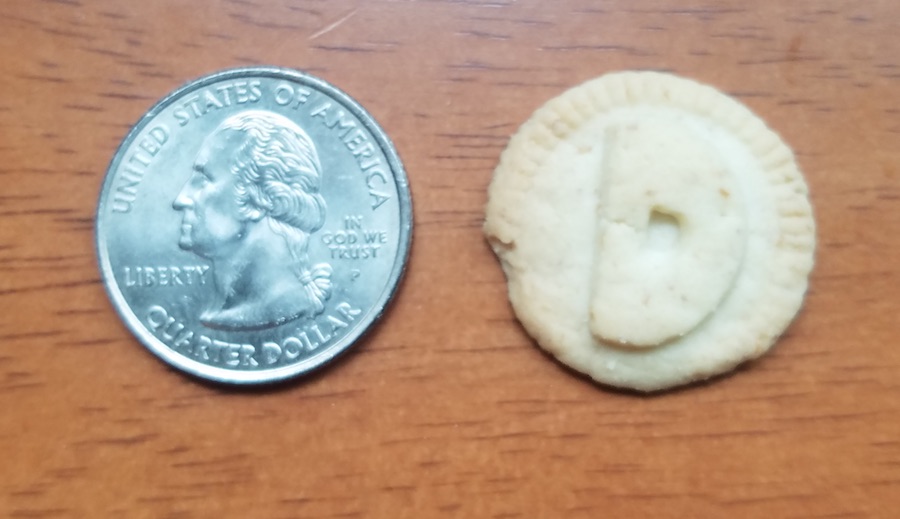 That’s exactly what they always were. If you loved Dunkaroos before you’ll still love them now. You’ll just love them less often. You might have some once or twice a year. But your kids are going to freak. I mean, it’s still cookies dipped in icing.

We know the perils of nostalgia. A desire to return to the past can be dangerous. Humans have the ability to distort how things used to be, remembering people, places, and events more fondly than they really were. It’s understandable though, and we’re all guilty of it. Idealizing “what was” is often easier than facing “what is.” Living in our memories can be preferable to facing a difficult present and an uncertain future. Nostalgia is frequently a type of coping mechanism. But it can also hold us back from dealing with our problems and growing as individuals. MOST OF THE TIME. Sometimes nostalgia is the absolute best, because sometimes you can taste how good things really were. And we mean “taste” literally, especially in this case. General Mills has announced it is finally bringing back the beloved ’90s snack Dunkaroos.

This summer, for the first time since they were discontinued in the U.S. in 2012, Dunkaroos are returning to American stores. The popular cookie and frosting combo snack had still been available in Canada until 2018 before it went off the market there as well. There’s no word on if or when our friends north of the border will also get to indulge in that delicious ’90s treat any time soon. But worst case now they have an excuse to come visit us. 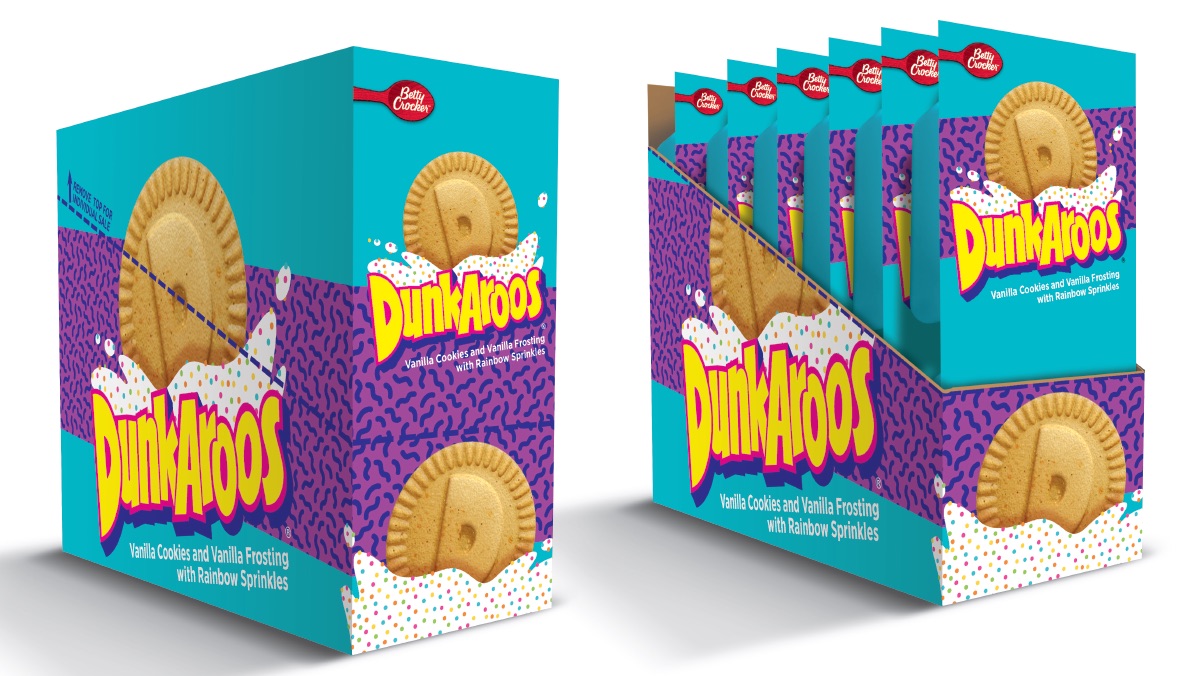 Dunkaroos were first sold way back in 1992. Initially they were available in five different graham cracker shapes with either chocolate or vanilla frosting to dip them in. Bu by 1993, the line had already expanded to include four other frosting flavors. They were Chocolate Chip, Cinnamon, Peanut Butter, and Rainbow Sprinkles.

This time General Mills says it will be available in the “most requested” flavor, Vanilla Cookies and Vanilla Frosting with Rainbow Sprinkles. If we’re only getting one type, that’s the one we want. It’s the definitive Dunkaroo flavor lineup. Would we prefer to have all options again? Of course. We’d also like to literally hang out with Dunkaroos animated kangaroo mascot Sydney, so we’re not going to complain about only get one kind.

“We’re thrilled to relaunch Dunkaroos in the U.S. after years of it only being available in Canada,” said Jeff Caswell, president of Snacks at General Mills, in a statement. “For those who grew up in the ‘90s, the original cookie-frosting combo represents the taste, color and fun of being a kid during that decade. We know there’s a lot of love for Dunkaroos, and fans everywhere have been asking for it. We’re excited to help ‘90s kids relive all the best parts of childhood.”

As ’90s kids we don’t know what’s more exciting. A whole new generation of children will experience the joy of finding cookies and frosting in their schoolbags. But we’re going to pack them in our own lunches too.

Kidding! We’re definitely more excited for us to eat them again. But no one tell them about the right ratio of cookie-to-frosting. Getting that wrong and then using your finger to eat the rest of the frosting is a fond memory. We want them to look back on that moment someday as well. Because nostalgia isn’t always bad. Sometimes it’s delicious.