We Threw an Authentic Buddy the ELF Syrup Spaghetti Feast

Before Thanksgiving, I made my own friends eat Rachel Green’s gross, sauteed beef trifle from Friends. It was quite unpleasant. I didn’t tell them about it beforehand. I didn’t want to repeat that strategy for my next strange cinematic cuisine experience because it would have violated the spirit of the season. Also, I imagine there’s a limit on how often you can turn your loved ones into unwitting lab rats you feed garbage to before they turn on you. This time I asked for volunteers, but I refused to tell them what we were eating. I thought for sure someone would guess the dish, but they didn’t, which is how I ended up throwing an authentic, surprise Maple Syrup Spaghetti Feast from Elf.

Everyone remembers Buddy the Elf putting syrup on all his food. The first meal was a normal plate of spaghetti and marinara sauce with maple syrup (which you can see in the clip above); Buddy chugged an entire two-liter bottle of Coca Cola to wash it down. Buddy then made his far more famous breakfast version of the dish, which included tons of sweets but no marinara sauce. Buddy’s spaghetti is plain before he starts adding candy to it. Yep. We started with the less insane version with sauce.

Buddy’s spaghetti is definitely plain to start, unlike the spaghetti with sauce in the corner

The group of volunteers included my wife Courtney, our friends Ray and Alex who hosted, as well as Lauren and a way-too-eager Jeff, with a bonus appearance from Ray and Alex’s young son William. The adults were served one scoop of spaghetti, along with one large spoonful of homemade marinara, except for Jeff who asked for more. Everyone then added as much maple syrup as they wanted.

I also gave everyone a 16-ounce bottle of Coca Cola, the only beverage allowed while eating; they were required to finish it during the feast. 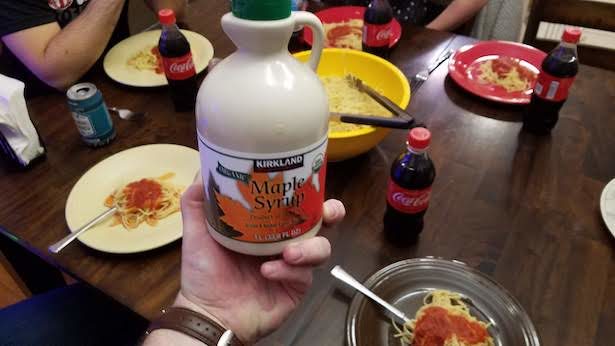 We were all very worried about how gross this would be, but then, uh, it really wasn’t that bad. Seriously, it was kinda fine. 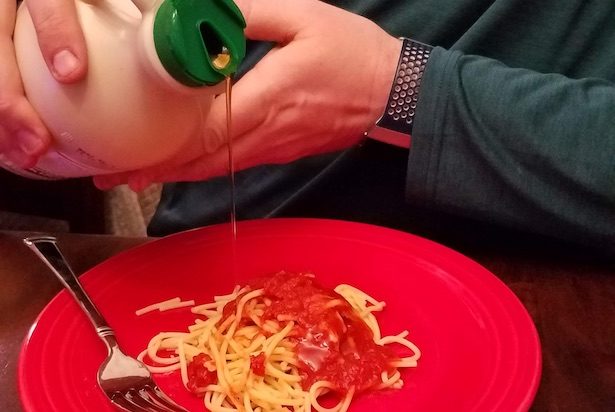 My Italian grandmother must never know about this.

The one thing everyone agreed on was that Coke and its 55 grams of sugar (fifty-five!) was not enjoyable.

Was this marinara and maple syrup spaghetti good? No. If any restaurant served you this, it would be your last time eating there. But it didn’t make us sick, because there’s sugar in marinara sauce already it was just super weird because it was sweet.

The next dish was a lot more…let’s say “intense.” Buddy tops his plain spaghetti with Sno-Caps, mini-colored marshmallows, M&Ms, and chocolate syrup. However, it’s safe to assume he added maple syrup when the camera cut away; he also had a bottle of caramel sauce on the table, so I made the executive decision to add those ingredients. 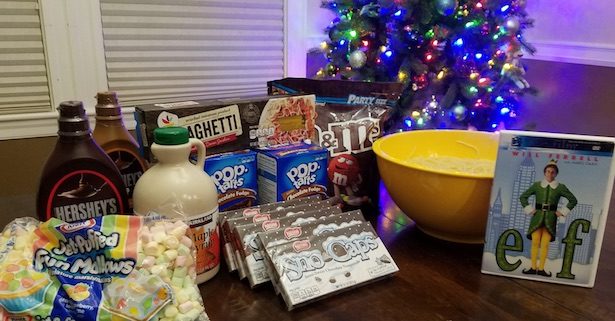 Not exactly Christmas dinner at Hogwarts, but at least we didn’t have slaves cook for us so that was a plus.

The Pop-Tarts came after.

Everyone got two to three scoops of spaghetti this time and then got to put their preferred amount of each topping. No one skimped. The result was a strange-looking plate that tasted as weird as you’d imagine. 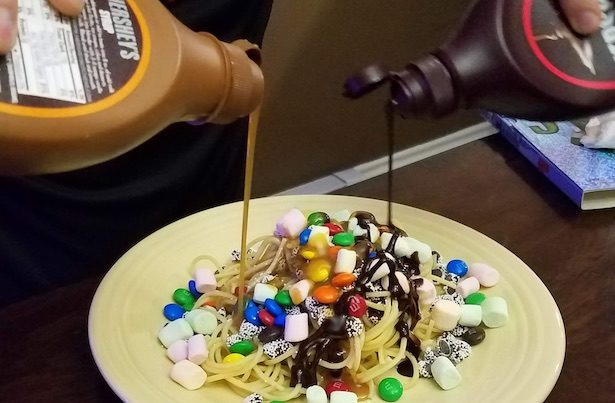 Everyone dug in with specific instructions to only eat half of their dish.The spaghetti still smelled and looked like spaghetti, but all you could taste was a glob of sugar and chocolate with a chewy texture. The spaghetti didn’t absorb everything like you would think either. Every bite felt like it would never end. The “best” bites included Sno-Caps, which melted in your mouth without being mushy. That did not apply to the M&Ms, because as Ray very accurately pointed out, they get “lost” in the dish. 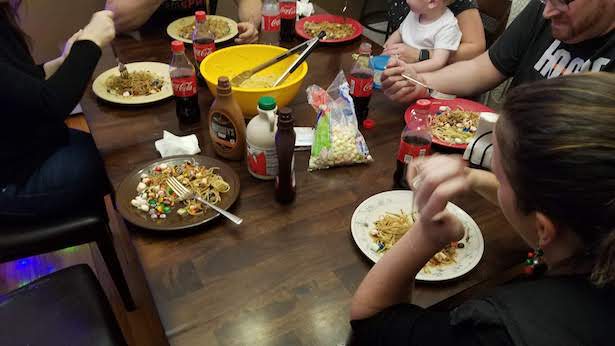 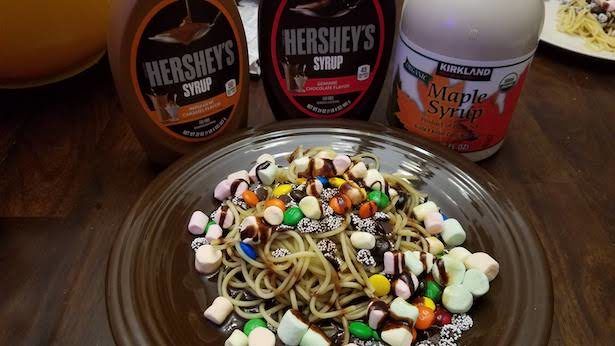 This is either the “glamour shot” or a reason to call the police.

The spaghetti was obviously the “biggest” problem, but you couldn’t eat this dish without the noodles to bind everything together. All of those candies mixed with three sweet sauces weren’t exactly delightful either. On the whole, it was, as you might guess, too sweet and strange, and only being able to drink Coke made it worse. A glass of water would have been fantastic.

Little did we know how bad it was going to get. 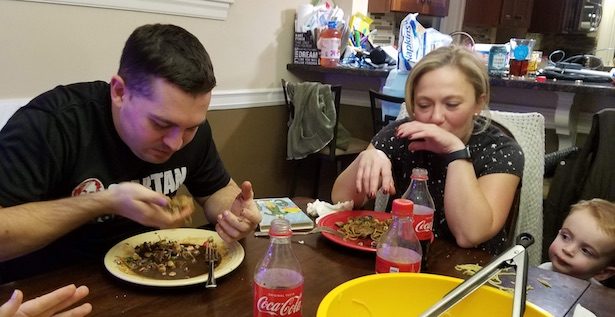 A bemused Will, easily the most mature person in the room, watches his Jeff and Lauren eat with their hands.

Buddy eats a big forkful of his dish in the film, then decides it’s missing something. He takes some Pop-Tarts, breaks them apart, and then uses his hands to crush them into the dish before eating all of it with his hands. So, we all ate the final version (wedding rings and watches wisely removed) with our cleanly-washed hands–while a two-year-old watched us in disbelief.

The chocolate fudge Pop-Tarts were sweeter than everything else combined because they absorbed all the sauces to become mushy bombs of cloying horror. And using our hands was vile and uncomfortable. 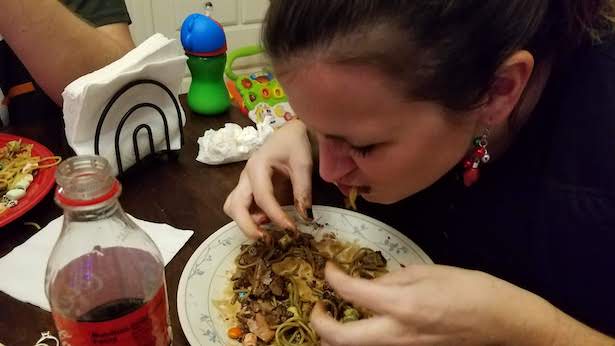 Alex is a wonderful person who doesn’t deserve to have this photo shared with the world, but here we are.

One thing no one anticipated was how a sugar soup would form at the bottom of the plate, making the Pop-Tarts grosser and grosser. We all finished, but we were hurting. 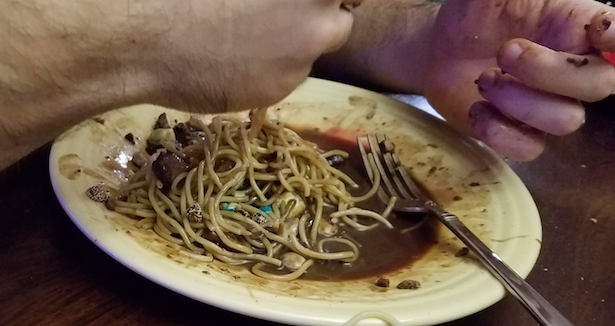 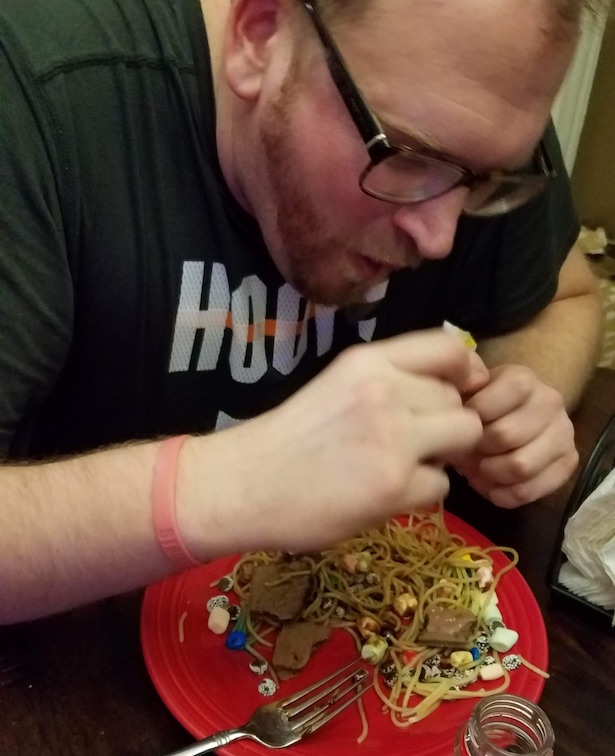 Ray’s a good person too, but I don’t mind sharing his terrible photo because he’s from Philly.

At least we were done. Almost. Because I take tremendous pride in being a professional moron, I decided to go the extra spaghetti mile and combine the two dishes: Buddy’s candy dish and the spaghetti with marinara sauce. Only Jeff volunteered to try it.

This photo captures the experience. 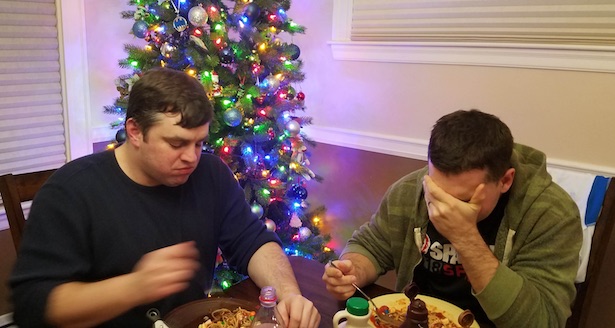 Wouldn’t blame Boston University if they revoked my journalism degree at this point.

No, actually, it was so much grosser than that. The combination was horrific. This disgusting monstrosity of tomato and sugar wasn’t eaten in the film, so I could justify not continuing. At that point, all six of us wanted to crawl into a hole and hide from what we had done. We were full. Full of syrup and shame. 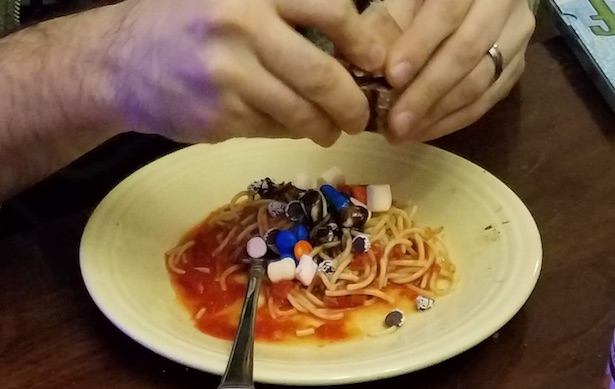 But one strange thing did happen: we all had a great time. This was stupid and ultimately pointless, but it was a fun excuse to get together and enjoy each others’ company during a hectic holiday season. Once again I found out just how great my stupid friends are. What better gift could you get from an elf, or from Elf, than that?