This DOCTOR WHO Game Will Consume Your Time(y Wimey) - Nerdist

This DOCTOR WHO Game Will Consume Your Time(y Wimey)

For those of us looking for something to occupy our free time during the upcoming Fourth of July holiday, salvation is here. From the UK, the very nation from whom we celebrate our independence comes an addicting new Doctor Who online game. An excellent way to get a Doctor fix when not checking out our recent interview or binging episodes of the show on HBOMax. 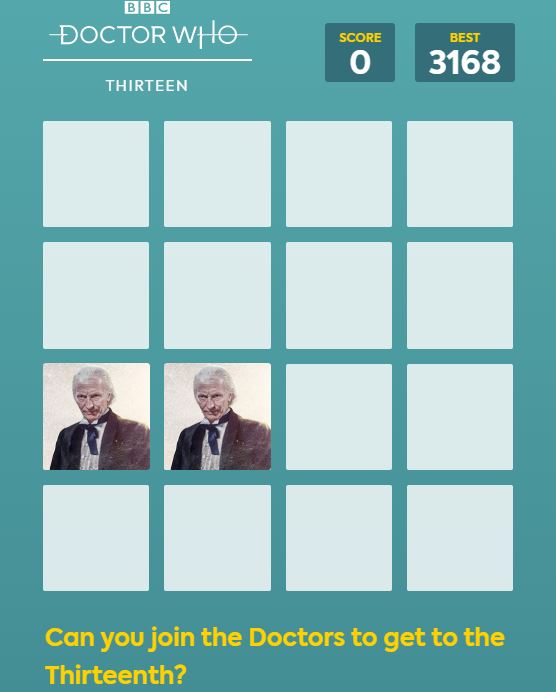 Thirteen, basically a Whovian mod of the popular 2048 mobile game, invites players to a 4×4 game board and challenges them to slide matching Doctors into each other, regenerating them into the next Doctor in the show’s cycle. So, two William Hartnells (the first Doctor) becomes one Patrick Troughton. Two Troughtons become one Jon Pertwee, who in turn become Tom Baker and so on. Whenever you side the pieces in a given direction, a new William Hartnell joins the board, filling up space and making it almost impossible to get to Jodie Whittaker’s Thirteenth Doctor. (Technically the fourteenth Doctor in the game, as in the show, since John Hurt’s War Doctor is placed between Paul McGann’s Eight and Christopher Eccleston’s Nine.)

The simple enough seeming game is actually a very devious and addicting time drain. Over at Nerdist, we’ve tried a variety of strategies and even just taken to randomly pressing buttons in a left and right, or up and down pattern, or doing a repetitive up, right, down, left sequence to see how far we’ve gotten. 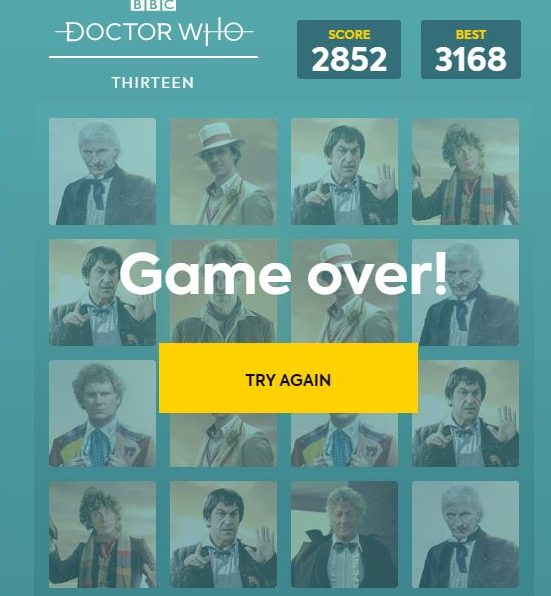 The highest we’ve managed to get to is a single John Hurt, whether we’re seriously focusing on the game or leaving it up to chaos. Once. Typically, the appearance of a Paul McGann on the field feels like a harbinger of defeat. Which, frankly, is a terrible way to feel about poor Paul McGann.

Radio Times published several reactions from readers and fans of the show attempting to succeed at the game. We especially loved this one from Twitter user Max Curtis, who basically did the digital version of removing and replacing the stickers on a Rubik’s Cube.

Finally got Thirteen! I'd share my strategy, but a champion has to keep some secrets pic.twitter.com/XZVonude10

Just as the slides move back and forth on the board, we continue to slip between loving the challenge and hoping that Jo Martin arrives to break the glass and toss the entire thing into a hole at the end of the galaxy.

Have you been caught up in the Thirteen madness yet? Tell us your strategies, success stories, or share your own defeats in the comments!