#WhoForSchools Brings DOCTOR WHO Creatives Together for Education - Nerdist

#WhoForSchools Brings DOCTOR WHO Creatives Together for Education

The Doctor Who fandom does more than debate over the best Doctor, companions, and episodes. There are many fans who have created incredible podcasts and artwork, and who have written books and in-depth articles about the series. Several of these creatives have formed Gallifrey Stands to advocate for various social issues. Last year, Gallifrey Stands raised $20K for several gun safety organizations during their #WhoAgainstGuns campaign. This year, Gallifrey Stands cause is improving access to education with #WhoForSchools. It’s a solid cause considering that there are 258 million kids worldwide who are not enrolled in school and millions of US adults who cannot read.

Over 50 writers, podcasters, and Doctor Who fans are coming together to record commentary for Classic Doctor Who Season 26, which was the last season of the show’s original run and which is celebrating its 30th anniversary this year. Season 26 featured Sophie Aldred as Ace, the Seventh Doctor’s companion; Aldred has joined the educational fundraising efforts by lending her voice to a bonus commentary episode. Check out what Aldred had to say about Doctor Who fans, Ace, and #WhoForSchools:

“The generosity of the Doctor Who community never ceases to amaze me. I’m so happy to be supporting the #WhoForSchools initiative. Education really does make a difference. Even though Ace didn’t have the best of times in conventional education (though arguable her Chemistry experiments were what got her to meet The Doctor in the first place) [but] she was lucky enough to be inspired by the education The Doctor gave her. Access to education is critical to ending poverty, hunger, war, and suffering across the globe. Thanks for your support.”

Popular Doctor Who podcasts like Radio Free Skaro, Verity!, Reality Bomb, The Time Ladies, Mutter’s Spiral, Who & Company will be featured alongside Doctor Who writer Vinay Patel (“Demons of the Punjab”), script editor Andrew Cartmel (Doctor Who 1987-1989), and many more fans, bloggers, and various creators. This cause is particularly close to Reality Bomb podcast co-producer Joy Piedmont’s heart as a high school teacher and librarian. She hopes that #WhoForSchools can help bridge the gap between her educational experience and the lack of resources for others.

“Education has always been a deeply meaningful part of my entire life and I was privileged to grow up in a middle class suburban, well-funded school district, with tons of support from my family and community in pursuit of my education all the way up to my graduate degree. The terrible truth is, education shouldn’t be a privilege afforded only to those who are lucky enough to be born into it.

It’s a human right, and there are too many young people around the world for whom education is a precious commodity. Doctor Who has shown us that intelligence, empathy, and kindness can win the day, which is why we, as a community of Doctor Who fans, are using the power of our fandom to help raise money and awareness to increase educational access around the world.” 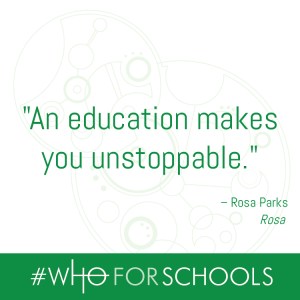 Fans who want to get involved with #WhoForSchools can check out Reality Bomb’s #WhoForSchools page for a list of all the organizations supported by Gallifrey Stands. Supporters can pick a cause, donate $10, present their receipt to [email protected], and get all the details on how to access this special set of commentary. There are even graphics included to spread the word on social media. Like anything related to Doctor Who, time is of the essence with donations being accepted through November 10.

It’s safe to say that #WhoForSchools would get a stamp of approval from The Doctor.