You can’t actually visit Stark Tower in New York City. Trust me, I’ve looked everywhere for it. But you can now find Earth’s mightiest heroes and a taste of the Big Apple across the Atlantic. Disney has announced the opening of Hotel New York – The Art of Marvel.

Say bonjour to the Avengers at Disneyland Paris‘s newest resort. The park’s most recent addition is an homage to all things Marvel and New York City. The four-star hotel has more than 350 pieces of Marvel artwork on display from more than 110 artists located all around the globe. That includes about 50 pieces “created exclusively” for the resort. Disney calls it “one of the largest collections of Marvel artwork in the world.” All presented resort in the style of a New York City art gallery.

There’s more than just artwork for guests to appreciate, though. Visitors will immediately find themselves immersed in the Marvel universe when they enter. The lobby features “huge” backlit comic panels. As well as three life-size Iron Man suits and Captain America shields. But that’s just the start.

“The Guest experience is taken to the next level with a holistic, 360-degree approach to storytelling and exclusive experiences. Hotel Guests can enjoy a Selfie Spot with Spider-Man at the Super Hero Station, where they can also find exclusive Marvel Photo Stations showcasing décor from favorite Marvel movies for Guests to take action-packed photos. Little ones can learn how to be a Marvel comic book artist in a creative space called Marvel Design Studio, while sports enthusiasts can enjoy the fitness center, indoor and outdoor Metro Pool, and Hero Training Zone, a 420-square-meter outdoor field with dedicated areas for a variety of sports activities to be enjoyed by guests of all ages.” 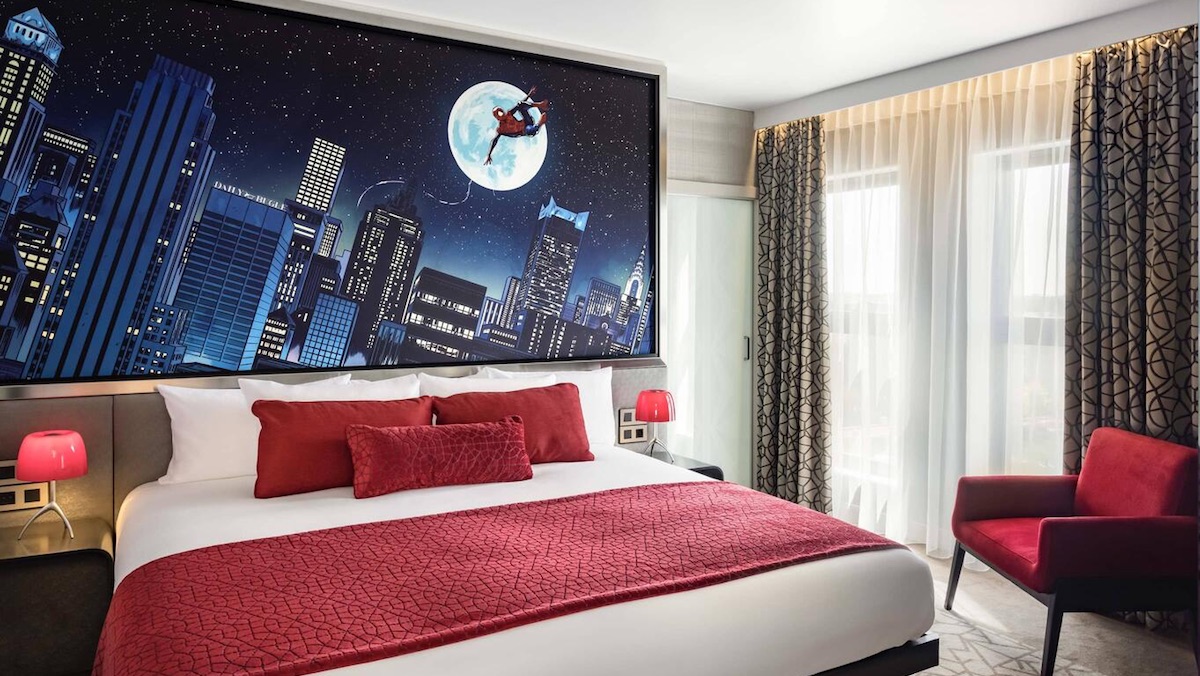 The hotel also features plenty of typical high-end amenities too. It has 471 Superior Rooms, 65 Empire State Club rooms, and 25 Suites dedicated to Spider-Man, the Avengers, and other Marvel heroes. It also offers “a Manhattan-style, four-star service and accommodations right down to its food and beverages.” That includes bars and restaurants “inspired by many New York specialties and a full range of Marvel-themed meals and drinks.”

Disney’s Hotel New York – The Art of Marvel is not Stark Tower, it’s better. Not because I don’t expect Loki to attack it though. (I wouldn’t put anything past him or his Variants.) But because this building is real.