This Puzzle Table Is a Jigsaw Lover's Dream Setup - Nerdist

This Puzzle Table Is a Jigsaw Lover’s Dream Setup

YouTuber Simone Giertz originally appeared on our radar in 2016 as the self-proclaimed Queen of Shitty Robots. Since then, Giertz has built whacky, wonderful and shockingly useful things. Some of which we desperately want for our dogs. The creator’s latest project, however, may genuinely be her most beautiful and functional build yet: a two-in-one puzzle and dinner table that’s also a masterpiece of woodworking.

Giertz recently posted the two-in-one table to her eponymous YouTube channel. As the “inventor and breaker of things” notes toward the beginning of the video, she decided to tackle the project because she didn’t have enough room to both do jigsaw puzzles and eat food on her dining room table. Incidentally, it’s a common problem for LEGO lovers as well.

In the 20ish minute long build video Giertz shows how she conceptualized and built the ingenious surface. As the creator notes, the dual-top table is unique from many other board game tables as it doesn’t require a separate top piece. Instead, Giertz’s table essentially works like a hand-cranked treadmill. It has a running belt consisting of tambour—a pretty, yet notoriously finicky type of wood.

In all, Giertz took more than two months to build the table, pushing through some harrowing experiences during the process. She not only had to overcome her fears of lathes, but also contend with anxious work dreams. And pressure on her thumbs that was so bad she needed to 3D print a tiny tub just to soothe them. 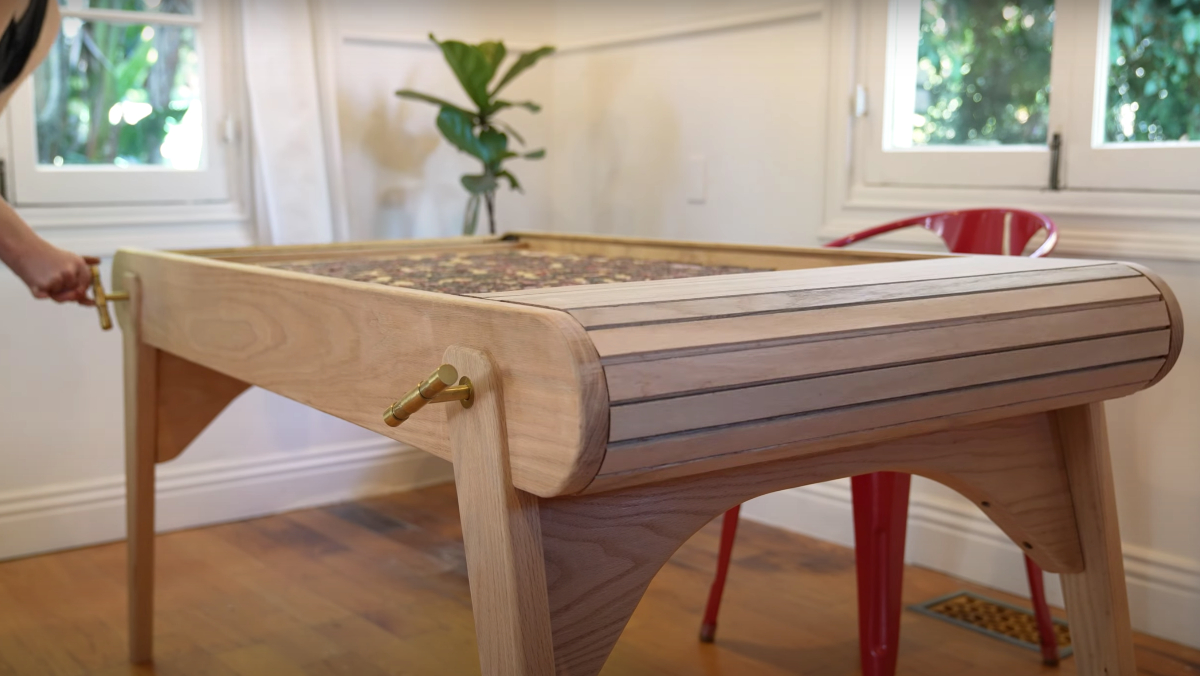 The agonizing process was undoubtedly worth it. Giertz reveals the final product at around the 15 minute mark in the video. It’s a truly awesome piece of furniture. Although Giertz says the table is “over-engineered,” its complexity makes for a clean, simple design. Heck, we’d even just sit there turning the table’s knobs for fun. Which sounds about as exciting as doing a jigsaw puzzle? Just kidding, puzzle peeps, we know it can be… thrilling.