This LEGO Sorter Offers an Ingenious Way to Separate Bricks

Serious brick heads know there are a few big enemies of building with LEGO. There’s the “where in the freak is that one missing piece?” problem. And, of course, the test of a thousand thumbnails. But if there’s one constant boss battle, that has to be the giant, miscellaneous LEGO pile. However, to remedy the usually tedious task of parsing through piles, YouTuber Bob Clagett now has a simple solution: a DIY LEGO sorter.

Laughing Squid picked up on Clagett’s sorter, which he posted to his YouTube channel, I Like to Make Stuff. Clagett, who recently left the software industry, does indeed like to make stuff. On his website, the engineer notes that he’s into making everything from furniture to motorcycles. Although many of his builds are—dare we say—quite nerdy. 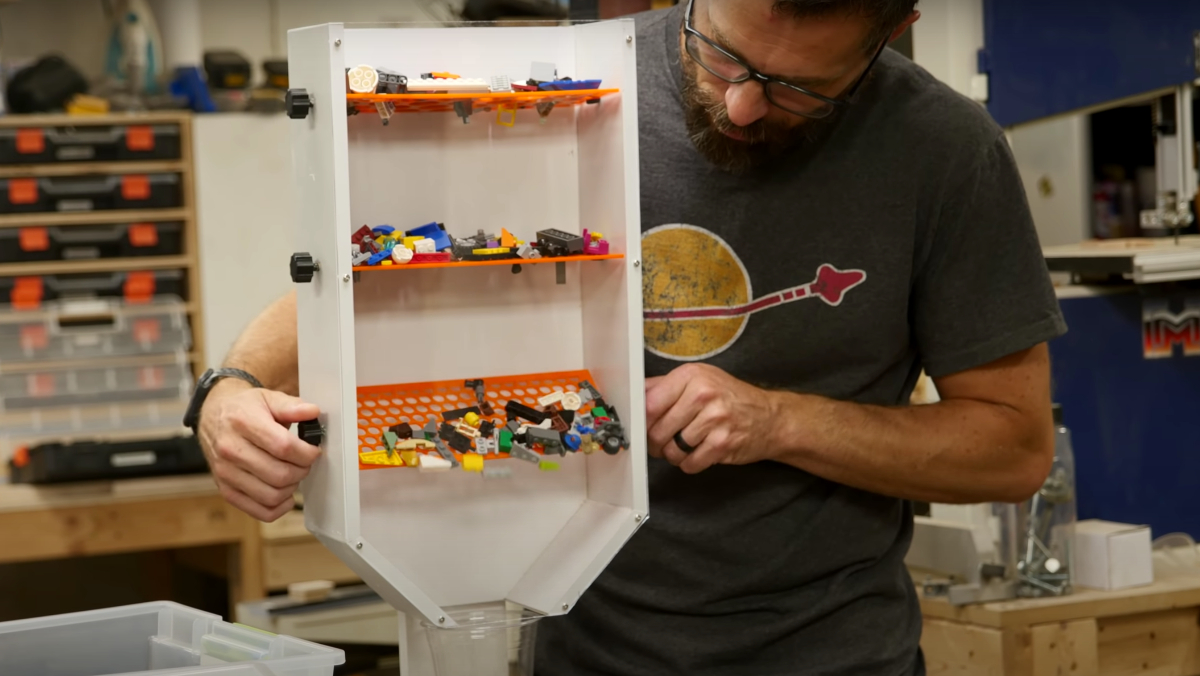 In the video above, Clagett shows how he built his DIY LEGO sorter. The engineer felt compelled to create one as he wanted to find a way to store his children’s overflowing piles. Again, as LEGO lovers know, storing piles as piles does not really count as cleaning up. Or at least it’s not nearly as satisfying as storing pieces separately, like with like.

As Clagett shows, the sorter is essentially a large funnel with several floors of filters with holes of varying sizes. As a user drops LEGO pieces into the top of the filter, they fall through the holes, which grow smaller and smaller toward the funnel’s bottom. Subsequently, the top filter captures the largest pieces, the middle filters the medium-sized pieces, and the bottom filter, the smallest ones.

Clagett demonstrates how the sorter works at around the 14-minute mark by pouring a shallow bucket of LEGO through it. Overall, the contraption does seem to catch like pieces with like pieces in terms of size, but, as the engineer notes, there’s a lot of room for improvement. Based on the test run, for example, it seems like some pre-sorting may be necessary. Which could be automated or not with AI. For real.

For those who are looking for an old-school yet inventive way to sort their LEGO, there are other options. Clagett’s DIY cardboard LEGO sorter probably works well enough if you don’t mind some analog shaking. Plus, there’s an app that can simply look at your LEGO piles and tell you what you can build with the pieces. Or if you have a show you want to binge, you can sort by hand—Netflix is the perfect complement to mindless organizing, after all.